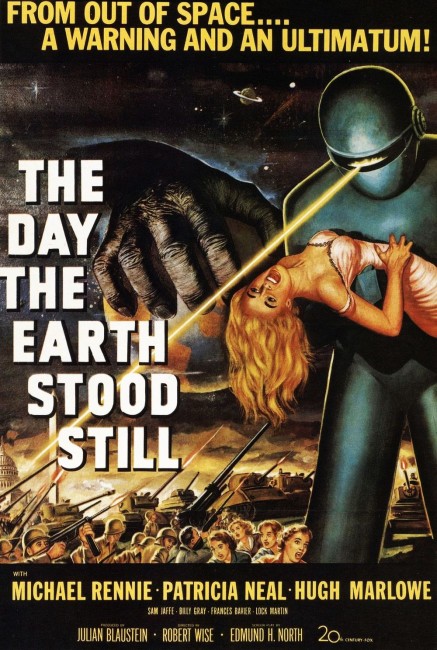 A flying saucer circles the world, eventually landing in Washington D.C.. A man and a seven-foot tall robot emerge. The man Klaatu produces a gift for The President but a trigger-happy soldier thinks it is a weapon and shoots Klaatu down. In retaliation, the robot melts all the tanks and weaponry with a ray from its visor. Klaatu is taken to hospital where he affects a remarkable recovery. He then announces that he wishes a meeting with all world leaders, however the leaders are too fearful to agree to this. Klaatu sneaks out and signs into a boarding house under an assumed name. He contacts scientists to organise a meeting between them. He arranges a demonstration by stopping all power on Earth for half-an-hour so that he can announce to the world that if humanity does not stop the nuclear arms race, his people will destroy the world.

The Day the Earth Stood Still is one of the genuine classics of the science-fiction genre. Most importantly, it was one of the very first alien visitor films of the 1950s – it was in fact the second, the first being The Thing from Another World (1951), which came out six months earlier the same year.

The Day the Earth Stood Still was based on a short story, Farewell to the Master (1940), published in Astounding, which was the science-fiction magazine of the era. The short story is set in the future and there are many differences between it and the film version, including the classic twist ending, not replicated here, where it is revealed that the robot is actually the master and the alien man the servant. One of the subtler changes is also that in the story Klaatu is shot by a religious fanatic, not an edgy trigger-happy soldier. Of course, what such change signals is the story come to the screen having been transformed into a post-WWII, post-Hiroshima message about peace.

What strikes about The Day the Earth Stood Still is the starkness and strident urgency with which it makes its point. There is a marvellously exciting opening. Accompanied by an enthralling Bernard Herrmann score, we follow the saucer’s path circling the globe, taking in, documentary-like, news scenes from all over the world and cutting away to troops mobilising, before the saucer lands right in the midst of Washington D.C..

Director Robert Wise generates a great sense of awe in the meeting with the alien – in seeing the seamless metal surface of the saucer open, to the appearance of Klaatu in his glittering metal suit and then of the robot Gort (played by the impressively imposing 7’7″ Lock Martin, who was found working as a doorman at Graumann’s Chinese Theater in Hollywood). However, this is only preamble to the scene where we see Klaatu accidentally shot and then Gort opening its visor and eliminating the weapons assembled around with a ray beam. The frisson such a scene had for audiences was in seeing Earth’s military might humbled and its weaponry melted to a glowing lump in a matter of seconds.

This was a signal that humanity was facing a quantum new threat, something that was bigger and more devastating than all meagre human military power. This is the entire brunt of The Day the Earth Stood Still – that the world is facing a threat that is larger than any earthbound terrestrial squabbles. Which is of course exactly what the generation of the 1950s saw The Bomb that had been unleashed only six years earlier as being. Almost every film of the 1950s cowers in the shadow of the threat of The Bomb – they mask and symbolise it as revived dinosaurs and giant bugs and offers ludicrous assurances that the forces of law and order would always be there to put such threats down.

Unlike any other film of that era though, The Day the Earth Stood Still challenges humanity to think beyond the small paranoid confines of nationalistic war-mongering and in terms of world-scale. Moreover, it directly issues a warning to humanity that it MUST disarm or else we will be destroyed. Certainly, it is easy to take issues with the film’s politics and apparent hypocrisy of a superior race issuing us with orders to disarm or else they will destroy us, and many have (although it is not a great deal different to many of the anti-nuclear pronouncements made to countries like Iran and North Korea by the US in the present day, while themselves holding the biggest nuclear stockpile in the world).

The Day the Earth Stood Still is one of the few positive and hopeful films of the 1950s. There are many aspects to it that no other 50s science-fiction film touched. It is, for example, the only film up until The World, The Flesh and the Devil (1958) to show African-American faces, even if they are only non-speaking roles in the background of the crowds, which says some unique things about how America (which equated itself with the whole world in these films) viewed itself.

Furthermore, Klaatu, played with ramrod saintliness by Michael Rennie, is seen as an avatar of transcendental rationalism and reason. (In fact, he is not unakin to Mr Spock in tv’s Star Trek (1966-9) over a decade later). However, such a character was almost entirely vilified by subsequent 1950s science-fiction, which saw a dedication to cool reason and aloofness as a dangerous thing – best exemplified by Invasion of the Body Snatchers (1956) where the cool, logical and totally emotionless is trying to subvert the warm, human norm, or Forbidden Planet (1956), which features a planet torn apart by an inability of a rationally advanced people to suppress their baser instincts.

Interestingly, The Day the Earth Stood Still was originally intended to hold many parallels between Klaatu and Jesus Christ. Some of these do survive – Klaatu is resurrected and the name he adopts while travelling incognito is pointedly Mr Carpenter – but the studio apparently demanded that other elements be watered down.

Director Robert Wise generates some fine psychological tension. There is a wonderfully shadowy chill to the scenes reactivating Gort and entering the ship, or to the scenes of Gort pursuing Patricia Neal. (Although these latter are somewhat undone by the clear crinkliness of the knees on the robot costume). Nevertheless, The Day the Earth Stood Still is a classic of the science-fiction genre whatever level one wants to view the film on.

Amid the early 1980s science-fiction boom a sequel, The Day the Earth Stood Still Part II: The Evening of the Second Day, was briefly mooted, with a script by Ray Bradbury that featured Klaatu’s daughter returning to Earth. Although nothing ever emerged of this, the concept was an appealing one where, with Ronald Reagan’s escalation of the arms race around that time, the only verdict that could be delivered would be an overwhelmingly negative one. The film was eventually remade as The Day the Earth Stood Still (2008) by Scott Derrickson, starring Keanu Reeves as Klaatu, which is not uninteresting. However, with the nuclear warning being largely obsolete, the message was now updated to the era of global environmentalism. The Day the Earth Stopped (2008) was an Asylum mockbuster copy of the remake.

The Day the Earth Stood Still was made by Robert Wise, one of the most versatile of directors during his career. Wise seemed to have an ability to create a classic no matter what genre he touched – be it the musical – West Side Story (1961) and The Sound of Music (1965); the war film – Run Silent Run Deep (1958) and The Sand Pebbles (1966); the ghost story – The Haunting (1963); the Western – So Big (1953), and of course the science-fiction film as here and also in The Andromeda Strain (1971) and the underrated Star Trek – The Motion Picture (1979). Wise of course received tutelage as editor for Orson Welles and made his directorial debut with two classics for the great Val Lewton, The Curse of the Cat People (1944) and The Body Snatcher (1945). His other genre films include the human hunting film A Game of Death (1945) and the reincarnation film Audrey Rose (1977).