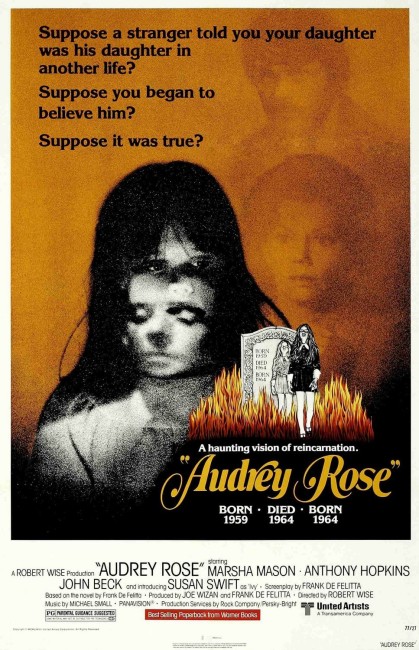 Bill and Janice Templeton become concerned about a stranger who keeps following and calling them and sends presents to their 11 year-old daughter Ivy. The stranger introduces himself as Elliot Hoover and tells them how he has come to believe following a trip to India that Ivy is the reincarnation of his daughter Audrey Rose who was killed in a car crash the same day that Ivy was born. He is able to calm Ivy’s recurrent nightmares down by calling her Audrey Rose. Hoover then abducts Ivy but is arrested. His subsequent attempts to argue a case for reincarnation at his trial become a cause celebre.

Rosemary’s Baby (1968) gave birth to an enormous cinematic occult horror boom in the 1970s. The boom spawned such successes as The Exorcist (1973), Carrie (1976) and The Omen (1976), each of which propagated their own subgenres of imitators. Audrey Rose came near at the end of that cycle when the genre had successfully established itself among A-budget films and where the theme of evil and/or possessed children was its overriding subject.

Both the film of Audrey Rose and the 1975 Frank De Felitta book it is based on give the feeling of a story that wanted to be something more serious that instead ended up pigeonholed in the horror genre. Screenwriter/original novelist De Felitta’s other works show him as a writer who wants to deal with the supernatural as real (or at least the sort of supernatural that becomes the stuff of tabloid magazines – reincarnation, hauntings, ghost rapes).

The novel was set up toward the purpose of placing an argument for reincarnation on a courtroom stand, which must surely stand as the ultimate arbiter of Western rationalism. (In reality though, the case presented here probably would be thrown by any court – whether or not Ivy is the reincarnation of Hoover’s daughter is surely irrelevant, the only thing a court is interested in is the issue at hand – whether or not Hoover abducted Ivy).

The film does change the balance of the book somewhat. In the book, the court case took up nearly three-quarters of the story but in the film the court case is reduced to only two or three showcase arguments and presented with considerable bias – no contrary arguments doubting or questioning reincarnation are ever highlighted from the prosecution’s side, for instance.

The film cannot escape the basic fact that it is burdened by a wordy and static script. This however does lead to a unique approach from director Robert Wise who uses the dialogue itself as suspense. Wise hypnotically engages us in Anthony Hopkins’s monologues, where one becomes so enrapt that even small movements like the spilling of a teacup or the relatively uninteresting shot of a door opening behind someone eavesdropping on a conversation is made to hold suspense. There are some effective scenes – particularly the one with burns suddenly appearing on Susan Swift’s hands when she places them on a cold window. However, try as Robert Wise might to turn Audrey Rose into an interesting dramatic film, the material remains solidly unmoving.

The first half of the film, set around Hoover’s bizarre intrusion into the family digs into the 1970s Stranger Danger peril. Hoover’s actions are designed with the intent of making the family anxious – their being followed, anonymous phone-calls, mysterious presents left, the child being abducted from school and from the apartment – without any thought placed into why the otherwise relatively rational Hoover is behaving so creepily. When we come to understand where the character is coming from later in the film, such furtive actions fail to make sense. The film’s generation of Stranger Danger paranoia is ironically so effective that it becomes almost impossible to view Hoover’s motivations normally and it is only through turning of him into a passive wimp for the rest of the film and Anthony Hopkins’s performance that the character succeeds in retaining any sympathy.

Far better at engendering sympathy is Marsha Mason who gives an enormously convincing performance in what is essentially a passively handwringing role. Young Susan Swift also manages to comes across as mature and intelligent.

Robert Wise directed a number of classic films including Run Silent, Run Deep (1958), West Side Story (1961) and The Sound of Music (1965). Wise’s other genre films are:– The Curse of the Cat People (1944) and The Body Snatcher (1945), two classic psychological horror films made for Val Lewton; the human hunting film A Game of Death (1945); the alien visitor classic The Day the Earth Stood Still (1951); the haunted house classic The Haunting (1963); the Michael Crichton adaptation The Andromeda Strain (1971) and Star Trek – The Motion Picture (1979).

Screenwriter Frank De Felitta has a number of other genre credits. He wrote and produced the overpopulated future film Z.P.G. (Zero Population Growth) (1971); directed/wrote the tv movie Trapped (1973) about a man hunted through a department store by dogs; directed/wrote the romantic time travel tv movie The Two Worlds of Jennie Logan (1979); directed the American Gothic tv movie Dark Night of the Scarecrow (1981); wrote the interesting ghost story The Entity (1982); and directed/wrote the worthwhile psycho-thriller Scissors (1991).