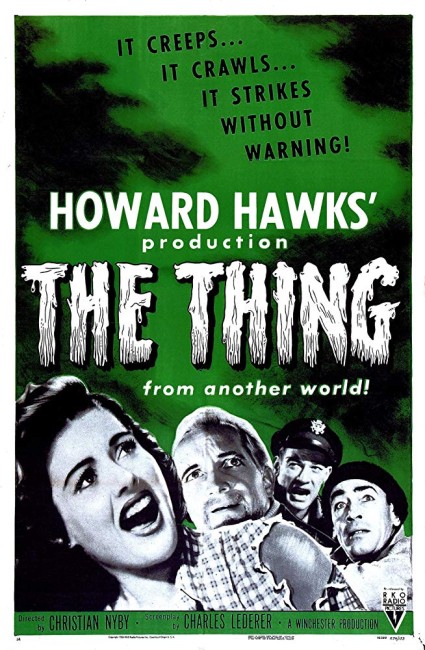 Journalist Ned Scott joins Air Force Captain Patrick Hendry on a flight up to a North Pole base to investigate the site of a meteorite crash. They arrive at the crash site to discover a flying saucer buried under the ice. Attempts to uncover the saucer using thermite charges instead end up destroying it. They find a body buried and dig out the surrounding block of ice and take it back to the base. An electrical cable running under the block of ice succeeds in thawing the creature out. It immediately starts attacking the men but proves impervious to bullets as they try to shoot back at it. As the men try to find a way to stop the creature before it kills them, Hendry finds his efforts thwarted by Dr Arthur Carrington and his team of scientists who insist the creature not be harmed so that they can study it.

The Thing from Another World takes its basis in Who Goes There? (1938), a novella by John W. Campbell Jr. As editor of Amazing/Analog, John W. Campbell is regarded as the single most influential figure of the Golden Age of (literary) Science Fiction in the 1940s. Campbell groomed writers such as Robert Heinlein, Isaac Asimov, Harry Harrison and A.E. Van Vogt (and okay, L. Ron Hubbard), while his tenure as editor of Amazing in the 1930s and 40s is agreed upon as being the one thing that transformed science-fiction from pulp space opera into a conceptual genre.

Who Goes There? was one of John W. Campbell’s earlier stories. Even so, the film ditches most of the story – everything except the central idea of a group of men trapped inside an Antarctic base and being picked off by an alien. (John Carpenter’s remake of this film, The Thing (1982), is a much more authentic adaptation of the story). Perhaps the most disappointing change made to the novella is the ordinariness of the Thing, which seems not much more than an actor – in fact, a young James Arness of Gunsmoke (1955-75) fame – in a boiler-suit with his head shaved.

Despite its abandonment of the source material, The Thing from Another World is highly effective on its own terms. Director Christian Nyby does a fine job in making The Thing’s appearances into something eerie. The first glimpse we receive of it comes only momentarily during a snowstorm, where we see it tossing huskies around its head. The scene where the men hunt it through the base, opening several doors to no effect where Nyby then takes everybody by surprise as they open the next door to suddenly find it standing there is one of the most effective examples of the red herring shock before it was done to death by every Friday the 13th clone. The scene where the men set The Thing on fire in the dormitory while protecting themselves with mattresses is genuinely exciting, holding an authentic seeming sense of danger on the part of the actors involved. Good too is the scene with the crew facing off against the monster in a narrow hallway, trying to get it to step onto the electrified platform, where the stakes are suddenly raised as the treacherous Carrington turns the power off.

What is perhaps distinctive about The Thing from Another World over the other alien invader films of the 1950s is its sense of pace. It moves far more tightly and more excitingly than any other 1950s science-fiction film. The script is incredibly slick – there is nothing to spare, nothing of excess. The film is also notable for its willingness to go out and shoot on what look like convincing Arctic locations, unlike almost every other 1950s science-fiction film, which kept indoors.

There has been considerable debate ever since The Thing from Another World was released as to who directed it – whether the director was the credited Christian Nyby or whether it was producer Howard Hawks, whose style the film very closely resembles. It is frequently argued that Howard Hawks directed the film but allowed his former editor Nyby to take the recognition so that Nyby could obtain a Director’s Guild credit, or that Nyby did direct but was kept on a tight leash by Hawks. (To further add to the confusion, the cast members made conflicting statements about who was in charge). Whatever the case, the argument is almost certain weighed in Howard Hawks’s favour. The Thing from Another World is made with an assurance that does not readily come to first-time directors. It is also directed in the dramatically tight pace and with the wittily bantering and overlapping dialogue that is distinctive to Howard Hawks films such as Scarface (1932), His Girl Friday (1940), The Big Sleep (1946), Red River (1948) and Rio Bravo (1959). Moreover, the film has the distinctive almost Hemingway-esque man’s man nature that is central to Hawks – the virile, commanding hero who is a man of action rather than of talk, the warm respectful camaraderie among his men. Certainly, Christian Nyby never went on to direct anything else of distinction. Nyby made five other forgettable films – routine Westerns and spy thrillers – and spent the rest of his career up until his retirement in the mid-1970s directing episodes of tv series such as Lassie, Gunsmoke, Perry Mason, Bonanza, The Twilight Zone, The Fugitive, I Spy, Gomer Pyle, The Streets of San Francisco and Kojak. Howard Hawks only direected one other film that falls into genre guidelines, the screwball comedy Monkey Business (1952) about a formula that causes people to act infantile.

This man’s man nature of the film is central to an understanding of The Thing from Another World. The film taps into the naked anxiety of the 1950s as much as any other science-fiction film of the period. The alien is seen as indicative of a new type of threat out there. The famous end speech – “Keep looking at the skies. Everywhere – keep watching. Keep watching the skies” – is one that bristles with all manner of suggestions of a new fear that was emerging – a fear of the nuclear age, fear of ICBM missile attack, of the newly emerged fascination with flying saucers. The film also unquestioningly sides with its man of action hero in the form of Kenneth Tobey. The Thing is a threat that is seen as implacable, brushing aside everything brought against it. It is in the end something that can only be stood up to by men who have no doubt about who they are and what they are doing.

Intriguingly, almost as great a threat as the alien proves to be the cold intellectual scientist played by Robert Cornthwaite. Cornthwaite gets speeches speaking up in favour of science over emotions – “No emotion, no heart – our superior in every way,” and “Knowledge is more important than life. We owe it to our species to stand here and die.” This was very much a post-WWII sensibility – the fear of intellectuals or the mind run rampant – and a theme that runs beneath much of 1950s science-fiction – see films like Forbidden Planet (1956) and Fiend Without a Face (1958). Equally intriguingly, The Thing from Another World paints Carrington as prissy, even conceivably of questionable sexuality – he comes with dyed blonde and wave-permed hair and, while the rest of the men in the film who dress in uniform, he swans about the base in a silk bathrobe.

The Thing from Another World was of course later remade as John Carpenter’s The Thing (1982), which returned much more closely to the John W. Campbell novella and altered the basic notion of the alien to that of a shape-changing body snatcher. This also spawned a prequel with The Thing (2011).