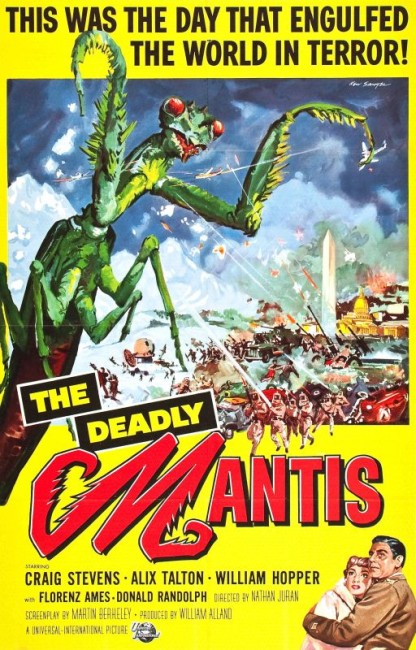 The controllers at the US Distant Early Warning System in Alaska puzzle after they detect something that is attacking planes and settlements. A fragment of a claw is found. Palaeontologist Nedrick Jackson identifies it as belonging to a giant prehistoric praying mantis, which he theorises has been kept in suspended animation in the ice. The giant mantis now makes its way south toward to the USA.

The Deadly Mantis is a standard variant on the 1950s atomic monster/giant bug film. The Deadly Mantis is predictable in most areas, copying the cliches that had been established by The Beast from 20,000 Fathoms (1953) and Them! (1954), the two progenitors of this genre. After a Beast-like discovery of the prehistoric central menace in the Arctic, the film follows the dramatic structure of Them! – buildings destroyed by an unseen creature, clues found to its biology, ending in a Beast-like climax as it heads south toward the United States, eventually being brought down at a famous landmark – the Holland Tunnel here, Coney Island in The Beast from 20,000 Fathoms.

The one distinctive difference between The Deadly Mantis and other monster films of the 1950s is the lack of atomic radiation as explain-all – it being one of the few giant monster/bug films not to invoke such. Certainly, it uses the Distant Early Warning system as an essential plot element, which does effectively root the film in Cold War sensibility in all essential regards.

The Deadly Mantis is routine. Director Nathan Juran directs with a documentary-like didacticism. The first half of the film in particular is reliant on much stock footage of Arctic bases and Air Force flights. Greenland, for example, is amusingly caricatured as being inhabited by hordes of Eskimos and huskies.

The effects vary between the occasionally unconvincing and the not-too-bad. The scenes of the mantis flying and blended with stock footage of fighter planes come with some eerie effect. In other scenes, Juran shoots in mist, which serves to effectively disguise many technical shortcomings. In all, this is one of the few non-stop motion animated monster movies of the 1950s where the giant monster effects are reasonably convincing.

Nathan Juran directed a number of monsters movies in the 1950s. His work varied considerably between A- and B-budget extremes – the same year as this, Juran also made the fine alien monster film 20 Million Miles to Earth (1957); the same year as Juran made the all-time Ray Harryhausen stop-motion classic The 7th Voyage of Sinbad (1958), he also made Attack of the 50 Foot Woman (1958). Juran’s other genre films include:– The Black Castle (1952), The Brain from Planet Arous (1957), Jack the Giant Killer (1962), The First Men in the Moon (1964) and The Boy Who Cried Werewolf (1973).