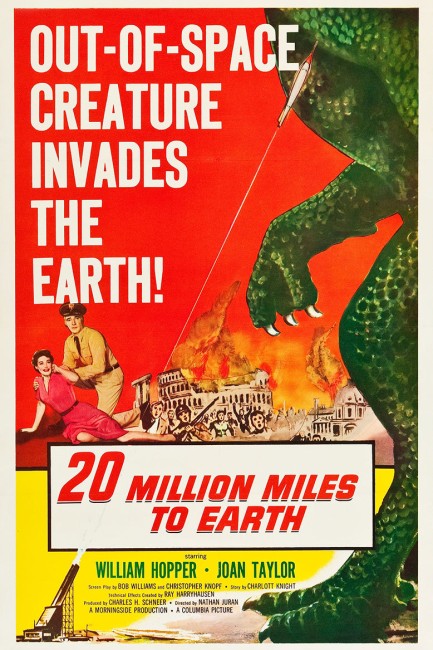 An American rocketship returning from Venus crashes in the sea off the coast of the small Sicilian fishing village of Gerra. The local fishermen rescue two survivors. Meanwhile, a young boy Pepe finds a specimen container that has a pod inside it and sells it to biologist Dr Leonardo. The pod soon hatches into a reptilian creature. The creature rapidly grows in size and is soon threatening livestock and people. The American military succeed in capturing the creature. However, in Rome, it escapes captivity and rampages through the city.

20 Million Miles to Earth is one of the early films from cult stop-motion animator Ray Harryhausen. Harryhausen had had great success with The Beast from 20,000 Fathoms (1953), which started the atomic monster fad of the 1950s. He then went onto create the giant atomic octopus film It Came from Beneath the Sea (1955), gained strength with the alien invader film Earth Vs. the Flying Saucers (1956) and then blossomed with 20 Million Miles to Earth. 20 Million Miles to Earth was also Harryhausen’s first pairing with director Nathan Juran with whom he would next make his all-time classic The 7th Voyage of Sinbad (1958) and later The First Men in the Moon (1964).

All of Ray Harryhausen’s early films (mentioned above) are monster or alien invader movies – and in the case of 20 Million Miles to Earth both. Perhaps signifying an underlying thematic connection of 1950s science-fiction films, monsters and alien invaders are interchangeable as threats in these early Harryhausen films. (With The 7th Voyage of Sinbad, Harryhausen would abandon social threats and discover mythic adventure, which would thereafter become his predominant thematic interest).

These early Harryhausen films often give the impression of having been conceptually constructed around a set-piece in which the particular menace of the show threatens a famous landmark – the rhedosaurus trampling New York and Coney Island in The Beast from 20,000 Fathoms; the octopus tearing down the Golden Gate Bridge in It Came from Beneath the Sea; the alien invaders trashing various Washington D.C. landmarks in Earth Vs the Flying Saucers.

This certainly true in the case of 20 Million Miles to Earth. The entire film has been construed around the Ymir (although the creature is never named such in the film) being shot down at The Coliseum. (This does at least make for one of the few occasions in 1950s science-fiction where a country other than the USA gets invaded).

Ray Harryhausen’s effects are highly impressive. These represent the blossoming of him as an animator from the point he was merely creating monsters to where he started to craft them into characters. There are some excellent scenes with The Ymir fighting a dog and battering a farmer – 20 Million Miles to Earth is a surprisingly violent film in some regards. The film’s great set-piece is the Ymir’s fight with an elephant in the streets of Rome and the shootout with the Army atop The Coliseum. It is a magnificent effects set-piece. Here you can measure as the point that Ray Harryhausen started to move beyond merely being a special effects man and became an artist.