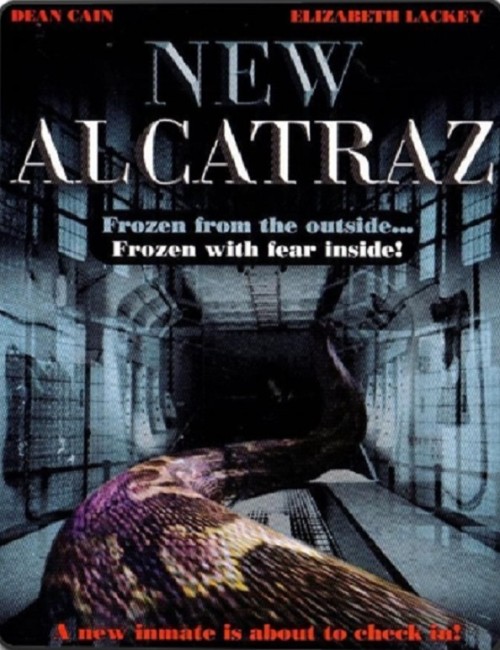 New Alcatraz is a maximum-security prison created at the South Pole to house the most dangerous criminals of all nations. During their drilling, the engineers come across a hollow area of rock filled with nitrogen. Under pressure to complete the project, the warden orders them to drill through it. Soon after, the men get glimpses of a giant snake moving through the complex, snatching up and devouring anybody it comes across. Palaeontologist Robert Trenton, an expert in undiscovered prehistoric snakes of the Antarctic, is flown in to advise, along with his wife Jessica and a team of military experts. However, the snake succeeds in easily devouring the military. This leaves Trenton, the warden and a handful of guards forced to join forces with the inmates in a cautious truce in order to escape.

In any other quarters, New Alcatraz might be regarded as a gimmick film. It is as though Phillip Roth and co-writer Terry Neish have tried to see what different genres they can throw together – so what we have is a riff on the sf/prison film a la Escape from New York (1981), Fortress (1993), No Escape (1994) et al that has been slung together with a science-fictional take on Assault on Precinct 13 (1976) – warders and prisoners have to collaborate for mutual survival – and a B-budget CGI monster movie of which Roth has produced several – Python (2000), Shark Hunter (2001), Python 2 (2002), Locusts: The 8th Plague (2005), Manticore (2005), Basilisk: The Serpent King (2006), Bats: Human Harvest (2007), Reign of the Gargoyles (2007), Copperhead (2008), Monster Ark (2008) and Rock Monster (2008). In some territories, New Alcatraz was even retitled Boa to make it into more of a monster movie. Roth later also produced Boa vs Python (2004), which would appear to combine this with the menaces from his Python films but is otherwise unrelated to either film.

While some of the Phillip Roth produced CGI monster movies have decidedly cheap effects, the snake monster effects here at least come with a serviceable competence. Roth generates a fair to moderate degree of suspense during all the skulking around the corridors of the prison. There were times that New Alcatraz seemed not too bad, with some thought even having gone into its scenario. There is a good science-fictional sense of verisimilitude in places – like where the plane lands and they have only twelve hours in which to get out before the fuel in the tanks will freeze solid, or else the need for a tracking locator to locate the base through the blizzard lest people become lost.

One wishes that Phillip Roth had a bigger budget as New Alcatraz could have worked as an A-budget film or even with longer length – the Dirty Dozen of prisoners are not nearly given enough screen time to engender any degree of likeability. The only point the film gets silly is at the climax with the scenes of the snake aboard the plane – its tail managing to somehow emerge through the seat to pierce the co-pilot, before a ludicrous sequence with various characters fighting with it on the edge of an open cargo bay door and it is dumped out attached to a parachute.

The film has a dubious political scenario, which almost certainly would cause a good many ripples about the establishment of new world orders in any real world setting. The idea of a world prison where each country sends their toughest prisoners is an intriguing one – although clearly this is something that approaches almost total disregard of rule of law – at one point, we see the arrest of a Chechnyan prime minister and his sentencing to the prison without even a trial for supposedly purchasing a nuclear weapon. (Oddly, the more one thinks about, the more this comes to resemble Guantanemo Bay).

Dean Cain, once the pouty Superman of Lois and Clark: The New Adventures of Superman (1993-7), plays the hero of the film. Cain is an actor that is in all likelihood destined to spend the rest of his career doing this sort of material. He has so far managed to wield his name to a number of roles in B-budget video-released action films. While one had little liking for Cain’s Superman, he does have a reasonably assured presence here.