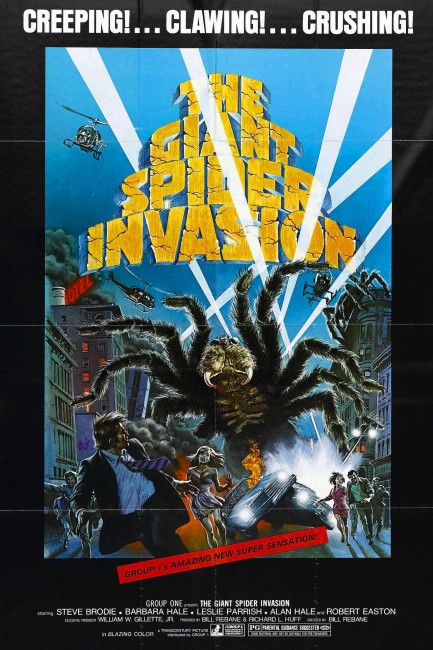 A miniature black hole comes crashing to Earth on a farm in Northern Wisconsin. A host of spiders hatch out of crystal geodes that are found nearby. The spiders quickly overrun everything and then produce one spider the size of an entire house that rampages through town.

The Giant Spider Invasion has a reputation as one of the genre’s truly terrible B films. Although one finds upon viewing it that it is not as bad as is claimed. Far be it from one wanting to defend it, rather than truly terrible, The Giant Spider Invasion is no worse than a routine giant bug movie. Its greatest crime is having been made twenty years too late, of being a standard 1950s giant bug movie in an era where the subgenre had moved to making eco-revenge film and killer shark ripoffs copying The Birds (1963) and Jaws (1975) rather than during the atomically-enlarged bug cycle of the 1950s. The film has a certain witty awareness of its competitors: “You’ve seen the shark in Jaws,” yells a panicking cop, “this makes it look like a goldfish.”

There are two features of The Giant Spider Invasion that every writer who derides it points to as clear evidence of its Golden Turkey status – one being that the giant spider is played by a Volkswagen, the second being the scientifically laughable notion that the giant spider emerges from a black hole that crashed to Earth. However, in both cases, these are pieces of evidence that have been distorted out of proportion to make the case. The black hole explanation probably comes from the fascination with black holes that was just starting to enter the public paradigm at the time the film was made and has the appearance of having been appropriated as a handy grab-all explanation.

To its credit, the film gives a lecture on what black holes are and gives the appearance that the scriptwriter actually went out and looked the material up in an encyclopedia, even if it is thrown in a boiler-plate info-dump. While the film never ties the idea of black holes and doorways to alternate dimensions as an explanation for giant spiders in any way that could be remotely regarded as scientific, one should at least place the notion in perspective – in the real world some have tried to seriously argue that a miniature black hole falling to Earth was the cause of the Tunguska explosion in 1912, so the notion is not as absurd as it might seem.

The same with the Volkswagen spider. One suspects that what everybody laughs about is simply the notion of the spider being played by a Volkswagen. One looked closely throughout and failed to find any occasions upon which they could see wheels or car bodies showing beneath the spider. Certainly, the effect is not as terrible as say the carpet monster with visible feet underneath in The Creeping Terror (1964) and the giant spider effects are at least comparable to those in the highly regarded giant ant film Them! (1954).

All in all The Giant Spider Invasion is a distinctly average rather than a terrible film. The pace is slow – not much happens at the start of the film – but director Bill Rebane does creates one or two frissons, mostly with the small actual-size spiders crawling over and pursuing people. The acting is at least up to a professionally competent standard and there is the odd amusing line: “I’m not eleven anymore – I’m 35-23-35,” says the strumpet of the show.

Director Bill Rebane has a reputation for making some genuinely awful films and The Giant Spider Invasion can actually be considered one of his better works. All of his other works fall within the sf and horror genre. His other films are:– Monster-a-Go-Go (1965), Invasion from Inner Earth (1974), Rana: The Legend of Shadow Lake (1975), The Alpha Incident (1978), The Capture of Bigfoot (1979), The Game (1982), The Demons of Ludlow (1983) and Blood Harvest (1987).