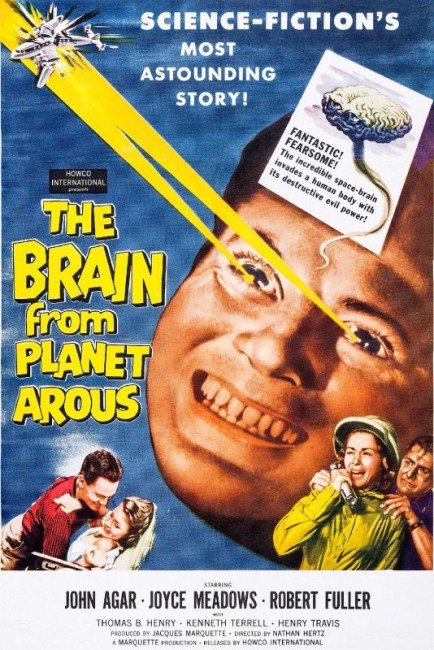 Nuclear physicist Steve Marsh goes to investigate a mysterious radiation source coming from Mystery Mountain. He returns possessed by Gor, a disembodied brain that is an escaped criminal from the planet Arous. Inhabiting Steve’s body, Gor delights in primitive human passions and takes megalomaniacal delight in flexing its mental powers. Gor gathers the heads of the military together where he mentally detonates an explosion more powerful than an A-bomb as a demonstration and then demands that the nations of the world bow to its will. Meanwhile, Steve’s fiancee Sally and her father are approached by Vol, a good brain from Arous that has come seeking their aid in stopping Gor. Vol takes over the body of Sally’s dog in order to get close to Gor unnoticed so that they can kill Gor at the time when he must emerge from Steve’s body to replenish oxygen.

The Brain from Planet Arous is another of those Z-budget 1950s genre movies that, along with the likes of Cat Women of the Moon (1953), Robot Monster (1953), Plan 9 from Outer Space (1959), They Saved Hitler’s Brain (1964) and Attack of the 50 Ft. Woman (1958) – the latter also being made by director Nathan Juran. It exerts a lurid fascination. The Brain from Planet Arous was all but forgotten after its release until it was rediscovered as a Z-movie classic in the 1980s.

On screen however, the film never lives up to such B movie luridness. It takes place with a straight-faced routineness and is drearily directed by Nathan Hertz. There are occasional scenes where it is woken up by a certain amusingly crude vigour, in particular the leery sexual designs of the evil brain: “Sally – a very exciting female. There are some aspects of the life of a savage that are exciting and rewarding. Even I must have some interest to spur me on – she will do verrry nicely.” The glowing brain itself looks effective but the effect is ruined by poor and obvious double-exposure effects.

Director Nathan Hertz was better known under the name of Nathan Juran. (Juran used to make the cheaper films he was embarrassed with under the name Nathan Hertz). Under both names, Hertz/Juran made a number of genre films throughout the 1950s and 60s, perhaps being best known for his collaborations with Ray Harryhausen. His films include:- The Black Castle (1952), The Deadly Mantis (1957), 20 Million Miles to Earth (1957), Attack of the 50 Foot Woman (1958), The 7th Voyage of Sinbad (1958), Jack the Giant Killer (1962), The First Men in the Moon (1964) and The Boy Who Cried Werewolf (1973).