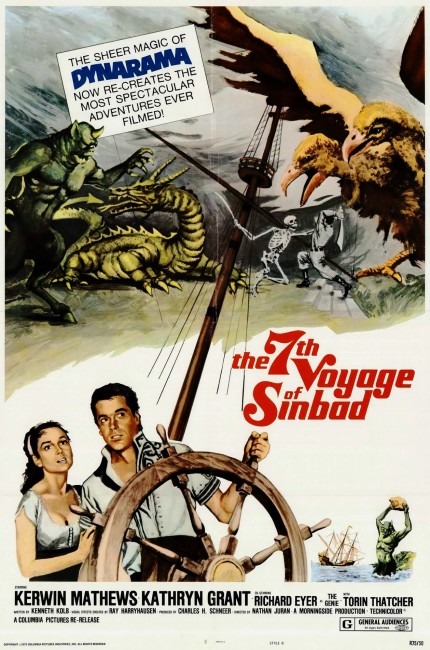 Sinbad the sailor and his crew come upon the island of Colossa, where they meet the sorcerer Sokurah. They are attacked by a giant cyclops. Sokurah saves them from the cyclops but in doing so loses his magic lamp. Back in Baghdad, Sinbad plans to marry his beloved, the Princess Parisa. When the Caliph refuses Sokurah’s entreaties to mount an expedition to return to Colossa to get his lamp, Sokurah secretly casts a spell that reduces Parisa to a few inches tall. When asked for his help, Sokurah says he needs roc egg shell to reverse the spell and so Sinbad is forced to mount a return expedition to Colossa. However, once the expedition is underway, Sinbad faces the perils of a mutinous crew, Sokurah’s treachery, and, once on the island, the cylops, the roc and a dragon.

The 7th Voyage of Sinbad is perhaps the most well remembered of Ray Harryhausen’s films. It was certainly the most popular and its success formed the template for the best of Harryhausen’s subsequent fantasies – with Harryhausen producing two further Sinbad adventures, The Golden Voyage of Sinbad (1973) and Sinbad and the Eye of the Tiger (1977), and using the same mythic adventure format in other films like Jason and the Argonauts (1963) and Clash of the Titans (1981).

Kerwin Mathews is serviceable as Sinbad, although Kathryn Grant as the Princess appears to have come straight out of high school. Torin Thatcher gives a performance that is at least admirable for its directness – someone like a Christopher Lee could have done great things with it but in shaven bullet-head and clipped accent Torin Thatcher comes across with an interestingly physical brutality. However, characterisation ends about there – Sinbad’s cutthroat crew seem to exist solely as a series of continuing lessons in not interfering in things they don’t know about. The plot swings its share of incredulities – it does seem incredible that nobody suspects Sokurah – a wizard and the most obvious suspect – of having shrunken the Princess.

Of course, what everyone came to see and what the whole of The 7th Voyage of Sinbad is directed toward, are Ray Harryhausen’s creations. These are expectedly fabulous. The scenes with the cyclops are superb, especially of it turning sailors on a spit and the fight with it pummeling men under trees. Harryhausen evinces the cyclops with an amazing sense of character – in the sense of pain on its face after Sinbad impales it in the eye with a burning brand, the way it stumbles about and is led to fall over the cliff.

The climactic fight between Sinbad and a skeleton is exceptional – with the choreography between the live-action and stop-motion being nothing short of amazing. It is only the roc scenes that never amount to much. Regular Harryhausen collaborator Bernard Herrmann contributes a score that has achieved just fame, one that relies on loud brass played on minor keys – it is unsubtle, nevertheless effective.

Director Nathan Juran/Hertz made a number of other genre films, all down the B-budget end of the spectrum. Indeed, The 7th Voyage of Sinbad was the most respectable film Juran ever made. Nathan Juran’s other films are:– the historical horror The Black Castle (1952), the giant bug film The Deadly Mantis (1957), Harryhausen’s 20 Million Miles to Earth (1957), the classic bad films The Brain from Planet Arous (1957) and Attack of the 50 Foot Woman (1958), Jack the Giant Killer (1962) – a blatant copy of The 7th Voyage of Sinbad, Ray Harryhausen’s The First Men in the Moon (1964), and The Boy Who Cried Werewolf (1973) wherein he reunited with Kerwin Mathews.