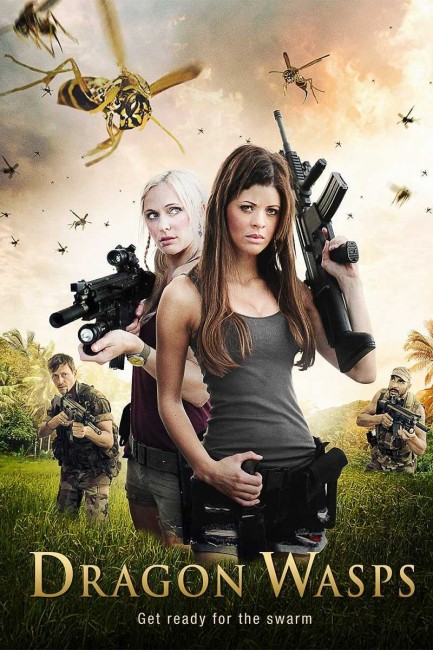 Entomology students Gina Humphries and Rhonda Gutierrez are studying in Belize when Gina learns that items belonging to her missing father have been found. The two of them head in search of him. This takes them into jungle territory where rebels are fighting and access is blocked off by US soldiers. John Hammond, the captain of the unit, agrees to accompany them into the jungle to find her father. Along the way they are attacked by wasps that have grown to giant size and breathe fire. Realising that the wasps have captured Gina’s father, they set out to find their nest. However, the way there requires passing through near the village held by the rebel leader/drug dealer Jaguar.

Dragonwasps was a Syfy Channel film.

Director Joe Knee had previously made the horror films Ghost Game (2004), Cult (2007) and Immortal Island (2011), although has done nothing since Dragonwasps. The film has several The Asylum associates on its credits – a screenplay by Mark Atkins, usually a regular Asylum cinematographer and a director of a great many of their films, and is produced by Anthony Fankhauser, a long-time Asylum producer and occasional director. Also as executive producer is Mark L. Lester, director of the likes of the Stephen King adaptation Firestarter (1984) ad the android schoolteachers action film Class of 1999 (1990).

The film emerges as a typical Syfy Channel monster movie – a genetically engineered menace; C-list stars signed on for any paycheque they can in the afternoon of their glory days; cheap CGI effects. Dragonwasps does nothing to vary from the standard. We get giant bugs and some briefly waved explanation about their being created by genetic engineering. There is an even more quickly pulled out of thin air explanation that allows for the destruction of the nest at the end, followed a cliché fadeout that reveals the menace has not ended. The plot travels in entirely predictable lines. The digital effects are expectedly cheap – they are passable but nothing more than that. To its credit, the film has actually gone and shot on location in Belize.

The only recognisable name the film has on offer is former teen star Corin Nemec who has found a comfortable niche during the 2000s/2010s making a host of other B genre films such as this. Nemec inhabits the role of the soldier surprisingly well and gives it a charismatic warmth. The less can be said for the two girls, Dominika Julliet and Nikolette Noel, who seem to have been cast from the standard Hollywood bimbo line-up.