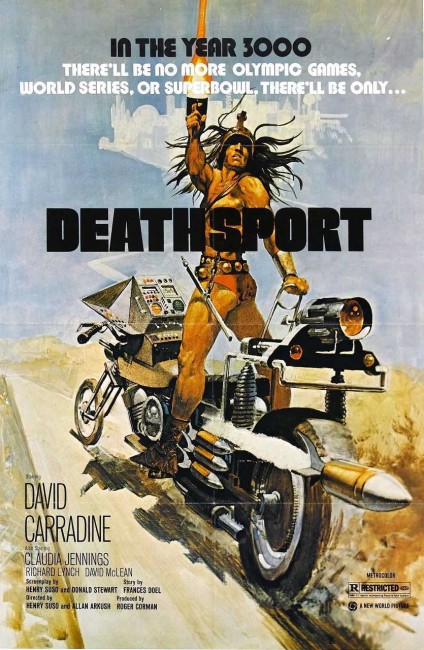 It is one thousand years after the Neutron Wars have destroyed civilisation. Lord Zirpola, the dictator of Helix City, captures Kaz Oshay and Deneer, two Range Guides – nomads with mystical powers who fight for good in the wastelands. Zirpola forces them to be combatants in his Deathsport – a gladiatorial arena where people fight to the death on motorcycles. However, Kaz, Deneer and several others make an escape on the motorcycles. Ankar Moor, a former Range Guide who became corrupted and serves as Zirpola’s right-hand man, usurps Zirpola’s rule and then pursues Kaz, Deneer and the others as they try to make their way across the desert to freedom.

Producer Roger Corman and star David Carradine made Death Race 2000 (1975), a quirky attempt to capitalise on the success of the future sports theme of the larger-budgeted Rollerball (1975). This proved to be a surprising box-office success and later became the basis of Paul W.S. Anderson’s Death Race (2008). In 1978, Roger Corman and David Carradine paired up again for Deathsport, which many took to be a sequel to Death Race 2000. Although it wasn’t a Death Race sequel, this was a connection that Corman was more than happy to play upon in pre-release.

Without even realising it at the time, Deathsport prefigured Mad Max 2 (1981) and its trend-setting depiction of the post-holocaust landscape as a realm inhabited by motorised crazies and loner heroes engaged in gladiatorial combat. Of course, what Deathsport was trying to imitate at the time was Star Wars (1977). While it uses the post-holocaust landscape instead of outer space as its playground, the film otherwise features the same type of story involving rayguns, heroes with mystical training, helmeted villains in black, and with motorcycle chases in lieu of interstellar dogfights.

Certainly, the idea of the mystical Range Guides gives the Mad Max copy a more intriguing and potentially substantial theme than usual. In actuality though, it is just David Carradine back in Kung Fu (1972-5) mode uttering imponderable epigrams – and here the prose really does become quite purple.

Ultimately, it is this and the cheapness of the production that does Deathsport in. The film has a single matte painting of a futuristic city background for the arena and uses it several times over – and obviously so. The same motorbike stunts and explosions are repeated several times. Worse the middle of the film turns into a lot of buzzing around the desert on motorbikes. The film clearly considered this would be enough in itself to maintain interest and this gives Deathsport extremely limited appeal beyond those that are motocross fans.

The film was apparently a mess behind the scenes. Corman wanted it made in 21 days based around David Carradine’s availability. Both Carradine and director Nicholas Niciphor have differing views about what occurred but both agree that Niciphor conflicted with Carradine and had a tyrannical manner, that Carradine assaulted Niciphor and that various of the crew, in particular Claudia Jennings (and possibly Carradine) were under the influence of drugs during shooting. Allan Arkush was brought in to conduct reshoots either because Niciphor quit or was fired on Carradine’s orders.

Director Henry Suso, alias Nicholas Niciphor, directed the obscure Goodbye Cruel World (1982) and these days writes for tv in Germany. Allan Arkush went on to direct Hollywood Boulevard (1976) and the cult Rock’n’Roll High School (1979) for Roger Corman, as well as the cute robot romance Heartbeeps (1981) and the fairytale spoof Prince Charming (tv movie, 2000). These days he directs a good deal of television. The heroine of the piece was played by Playboy Playmate Claudia Jennings who died in a car crash shortly after the film’s release. The soundtrack also features the peculiar novelty of no less than The Grateful Dead’s Jerry Garcia on guitar.