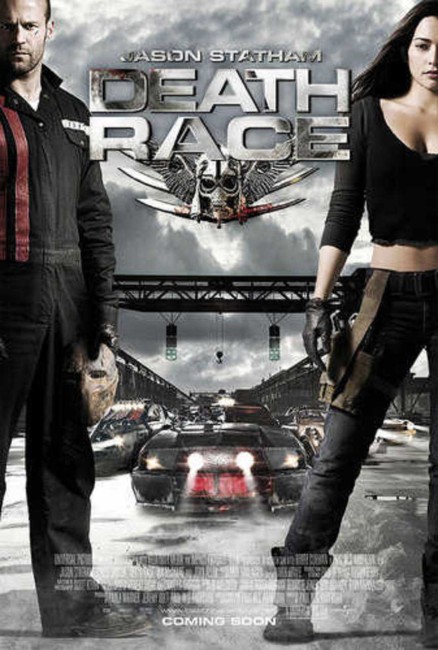 The year 2012. The USA has economically collapsed and prisons have become run by private enterprise. One of the toughest of these is Terminal Island, where Warden Hennessey runs the Death Race where inmates race around a track in heavily armoured vehicles eliminating one another. The Death Race has become a hit on pay-per-view television. Former racing driver Jensen Ames returns home from being laid off at his factory job, only for a masked assailant to break in, drug him, stab his wife and leave evidence planted to convict Ames for her murder. Ames is duly sentenced to Terminal Island. There Warden Hennessy offers him his freedom if he will participate in the Death Race. The masked competitor known only as Frankenstein has won four races but was killed in the last; if Ames can win the fifth posing behind Frankenstein’s metal mask he will earn the right to go free as all competitors do if they win five races. Ames agrees. However, as the race gets underway, Ames discovers that Hennessey was the one who framed him for the murder of his wife so that he could be brought there to boost the ratings and that she has no intention of letting him survive.

Death Race 2000 (1975) was a reasonable hit for legendary B movie producer Roger Corman when it came out – in fact, was one of the most financially successful films ever produced by Corman’s New World Pictures. At the time, Corman conceived Death Race 2000 as a quickie designed to capitalise on the success of the serious, big-budget Rollerball (1975), which concerned a dystopian future where the masses were placated by ultra-violent sports. In Death Race 2000, this was replaced by the blackly funny notion of road race across the US where drivers gained points by running down pedestrians. In fact, Death Race 2000 with its blackly funny satiric treatment received better notices than the more ponderous Rollerball did and attained a minor cult status for a number of years.

This remake of Death Race 2000 comes from a variety of talents so diverse that the mind boggles at thinking of all parties seated together around the boardroom table. Death Race is executive produced by Roger Corman, the famous penny-pinching producer-director who directed B movie classics like Attack of the Crab Monsters (1957), Teenage Caveman (1958) and The Little Shop of Horrors (1960). It is co-produced by Cruise-Wagner Productions, the production company of Tom Cruise, probably the Numero Uno star in the world.

And the production is directed/written by Paul W.S. Anderson. The British-born Anderson premiered with the non-genre Shopping (1994) but all of his subsequent films have been genre films, including Mortal Kombat (1995), Event Horizon (1997), Soldier (1998), Resident Evil (2002), AVP: Alien vs. Predator (2004), Resident Evil: Afterlife (2010), Resident Evil: Retribution (2012) and Resident Evil: The Final Chapter (2016) with the exception of The Three Musketeers (2011). Anderson has also written and produced Resident Evil: Apocalypse (2004) and Resident Evil: Extinction (2007), and produced The Dark (2005), DOA: Dead or Alive (2006) and Pandorum (2009). A substantial number of Anderson’s films are derived from video/computer games and almost all place an emphasis on action and special effects spectacle.

The Death Race that emerges from Paul W.S. Anderson does not have many resemblances to Death Race 2000. There is a race involving armoured vehicles trying to eliminate one another; there is a hero named Frankenstein (or at least whom the public believe is called Frankenstein) and an adversary named Machine Gun Joe … and well, resemblances end about there. What is entirely missing from Death Race 2008 is any sense of black humour, in particular the deliberately absurd notion of a road race where drivers win points by running people down.

One suspects the reasons for this are either that Paul W.S. Anderson does not have much grasp of the satiric absurdity of the notion – his films are not exactly noted for their sense of humour. Either that or the various suits involved in the production pushed for Death Race to be reconceived as an action film – a genre that did not exist (at least as it is perceived today) back in 1975 – and that it is next-to-impossible to conceive of a film about a race that involves running people down without telling it absurdly tongue-in-cheek. Thus the race where drivers gain points by hitting pedestrians is replaced by the far more mundane notion of convicts running around in armoured vehicles trying to kill one another as part of an ultra-violent gladiatorial cable tv show.

You could draw some analogies between Death Race 2000 and Death Race 2008 and when Rollerball was remade as the muchly disliked Rollerball (2002). Both are remakes of films that came out in close conjunction and on the theme of ultra-violent sports. Both remakes strip away the Dystopian future milieu that the originals existed in and substitute a tougher vision of the present-day. Both also see the ultra-violent sport in question as now being conducted for cable television audiences and create a new villain in the producer of the show who is seen as willing to endanger lives in order to create more bloodthirsty spectacle to pump up ratings. More importantly, both films are now reconceived as generic modern action movies and play into these with set-pieces that cater to action/adrenalin junkies. Action Films

What is even more noticeable is how Paul W.S. Anderson has reconceived the original in terms of the cliches of the modern action movie. Indeed, Death Race 2008 bears more in common with the Arnold Schwarzenegger vehicle The Running Man (1987) than it does Death Race 2000. The Running Man concerned a tv show where convicts were recruited to take place in an ultra-violent gladiatorial combat. In both films, the hero is a wrongly convicted man who succeeds in triumphing over a corrupt system that attempts to weigh the game against him and cause him to lose. See Prisons in Fantastic Cinema.

This also serves to push Death Race into another subgenre – the science-fiction/prison movie. Indeed, the prison is named Terminal Island, possibly in reference to the very first science-fiction prison movie Terminal Island (1973). Anderson wheels out the cliches of the genre as can be seen in films like Story of Ricky (1991), Fortress (1993), No Escape (1994) – notably the hero who is not in prison because he is a hardened criminal but because he has been wrongly framed; and his battle with a corrupt warden, which becomes a microcosmic battle against a dystopian future regime.

Paul W.S. Anderson conducts everything with a good deal in the way of grim, downbeat action and washed-out, almost sepia-tone lighting schemes. You would almost swear that he has conceived the film as a videogame at times – Anderson has directed or produced some six videogame-based films and is signed up for several others. It is not hard to imagine Death Race as being some kind of combination shooter/driver game – each round comes with levels of increasing complexity and there are even counters that one has to cross to pick up weapons points and so on. (Alien vs. Predator had exactly the same feel of being a cinematic videogame).

Characterisation has never been a strong point in Anderson’s films. Jason Statham holds the show together with the same bald-headed, grimly intent physicality that he has employed in every role since his first appearance in Lock, Stock and Two Smoking Barrels (1998). The one who catches the attention is Joan Allen as the fiercely tough warden (who more often than not is characterised by her clicking high heels). It is not a role that is original or uniquely delineated but where Allen stands out more for the fact that she has previously gained a name for her serious dramatic work and seeing her in an action role is a decided about-face.

There was a prequel with Death Race 2 (2010) where Paul W.S. Anderson took a producing role, which went back to tell the origin story of the Death Race and the character of Frankenstein, although was disappointingly only more of the same, and this was followed by Death Race 3: Inferno (2012) and Death Race: Beyond Anarchy (2018). Roger Corman subsequently went on to remake the original as Death Race 2050 (2017).