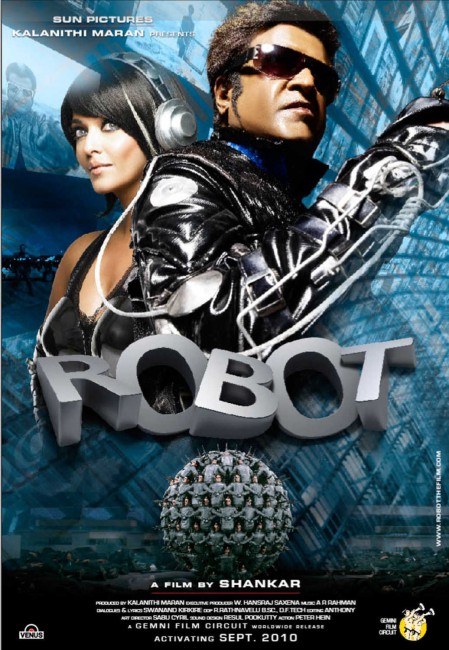 aka Enthiran the Robot; Robot

After labouring long and hard, the roboticist Dr Vaseegaran finally completes an android. Giving it lifelike skin and clothes, he then endeavours to teach it about the human world. Named Chitti by Dr Vaseegaran’s mother, the android demonstrates a literalness in interpreting orders but also great strength and versatility, including the ability to memorise books simply by looking at them. Professor Bohra, Vaseegaran’s superior at the university, is determined to obtain Chitti’s neural map for use in his own design for a military robot that he wants to sell on the arms blackmarket. After Chitti demonstrates heroism by rescuing people from a burning building but carries a girl out of her bath naked, shaming her so badly that she throws herself in front of a bus, Bohra seizes the opportunity to condemn Chitti as unstable and dangerous. Dr Vaseegaran decides he must educate Chitti in emotions and human values. Through this, Chitti comes to discover feelings for Dr Vaseegaran’s fiancee Sana. She responds to his attentions, which serves to enrage Vaseegaran who promptly dismantles Chitti and throws the parts away in the junkyard. However, Professor Bohra retrieves and rebuilds these, replacing Vaseegaran’s chip with one designed to turn Chitti into a killing machine. Chitti abducts Sana from her and Vaseegaran’s wedding ceremony and makes her his prisoner, determined that she will be his. Chitti then creates an army of copies of itself, taking what it wants from across Chennai to become even more powerful.

Enthiran the Robot (which is the title listed on the English-subtitled credits, although it is known as Endhiran on the IMDB and elsewhere) is the rare example of a Bollywood venture into science-fiction cinema. It is not that such has not happened before – there have been a few Bollywood superhero films such as The Indian Superman (1975), Mr India (1987) and Superman (1987), and in more recent years other efforts such as Action Replayy (2010) and the subsequent Ra. One (2011), Joker (2012) and PK (2014). However, the Bollywood tradition, which seems to be very much based around adding populist elements such as song and dance numbers and florid romance to every film is something that does not always easily sit with what we usually associate with good (serious) science-fiction in English-speaking territories – films of conceptual ideas exploring different worlds, cultures, technologies and how the future might turn out. Adventure-driven science-fiction such as Star Wars (1977) would probably be a shoe-in for Bollywood cinema, which could easily adapt the story to fit the mandatory singing, dancing and romantic numbers, but it would be much harder to adapt a classic conceptually driven science-fiction film – try and imagine 2001: A Space Odyssey (1968) or Blade Runner (1982) as a Bollywood film, although something like Zardoz (1974) would probably come out an even madder film than it is.

Enthiran/Endhiran is one such attempt at Bollywood/science-fiction fusion and the results are bizarre to say the least. Enthiran/Endhiran‘s greatest problem is that it seems to be trying to appeal to too many different niche interests. It is a film that tries to be everything – imagine an android self-awareness film like Bicentennial Man (1999) or A.I. (2011) combined with a superhero film of sorts, while in the latter half it turns into a killer android amok film a la The Terminator (1984) and sequels. Much of the plot seems a castoff version of the little-seen android chick flick Making Mr Right (1987) involving a love triangle by a roboticist, his lookalike android creation and a woman caught between the two of them.

This works okay but the film also tries to squeeze all the regular Bollywood song and dance numbers into this. Think of one of the films that Enthiran/Endhiran is trying to copy and imagine this being interspersed with slapstick comedy routines, goofy romantic interludes with the hero and heroine doing petty things to indicate their annoyance – like she deciding to walk off with the next man she sees because he is not giving her enough attention – or the addition of long song and dance numbers where they express their inner feelings and romantic frustrations.

Boiled down, Enthiran/Endhiran is an exceedingly simplistic android/artificial intelligence film – more down around the level of a 1960s artificial intelligence film. Like Star Trek: The Next Generation (1987-94), Bicentennial Man and A.I., it is founded in a humano-centrism – that being human is the culmination of existence and an android should desire to be able to feel emotions. Here, when Chitti begins to absorb the idea of emotions, we rather absurdly see digital flowers starting to grow inside his circuits.

The one thing that Enthiran/Endhiran has going for it are some reasonably impressive CGI effects – even if these would be a little cut-price to make the grade in an A-budget Hollywood effort. The production has obtained the services of Legacy Effects, the former makeup effects studio of the late Stan Winston, to create the animatronic versions of Chitti, along with a host of visual effects teams from around India and Asia. This made Enthiran/Endhiran the most expensive film ever produced in India. The film is at its most inspired in the sequences with Chitti in action – like one with him spouting skates out of his heels to race along a railway track after a train, leaping over oncoming trains, jumping into a carriage and single-handedly despatching dozens of opponents in furious hand-to-hand combat, or running along the side of the train at a 90 degree angle after being thrown off. It is a sequence that shows the influence of the Wachowski Brothers has even reached India with the sequence bearing more than a few resemblances to various ones from The Matrix Reloaded (2003).

There are some very good CGI during the scenes with Chitti conducting the rescue from the burning building. (This is a sequence that shows the difference in social values between India and the West – where Chitti does the logical thing and carries the girl naked from the bath, in a Western film this would be a subject of comedy, whereas in India a girl being seen unclothed is an issue of such shame that she promptly runs away and throws herself under a bus – one of the scenes where Enthiran moves away from comedy and into the sobering). There is a certain resonant imagery in these scenes and others where we see Chitti delivering a baby, although these sit aside other head-scratchingly bizarre ones such as where we see him conducting conversations with mosquitoes.

The CGI-enhanced car chase sequence contains some spectacular stuntwork, including a motorcycle crashing through the length of a bus; a car driving off a bridge and swinging around a pole to continue driving along the top of a bus; Chitti dragging two trucks together to tip the barrels on the back out into the path of oncoming traffic and then riding the explosion out while posed on the hood of a car; magnetically pulling all the soldiers’ guns to himself to promptly turn all of them back around at them. The best is saved for the final sequence where the CGI team lets all stops go in a sequence where the clones of Bad Chitti take on the Indian army and come together rearranging themselves into a giant sphere, a tube, a wall, even a snake that devours buses and helicopters, and finally a giant humanoid figure running down the highway after the control van like something out of Transformers (2007). The occasional shoddiness of some of the CGI does not detract from the sheer imaginativeness of the sequence.

Nevertheless, the need to have to add a romance and song and dance numbers to the mix as well is something that makes Enthiran/Endhiran a bizarre creation at times. There are the improbable romantic frustrations between Dr Vaseegaran and Aishwarya Rai Bachan – one number seems based around an Indian custom that would appear to require that the split up of a relationship necessitate the male sign a document to say that he has returned all of her gifts, whereupon he then demands with improbable contrivation that she also return the 500 or so kisses that he gave her. There are the song numbers – one involving them dancing across a desert landscape while singing lines like: “You are my hot wasabi in honey.” There is even a stab at conducting a science-fiction themed songs with lines like “Are you Isaac Asimov’s inspiration? Are you a miracle by Isaac Newton? Albert Einstein’s brainchild robot?” or between Chitti and Aishwarya Rai Bachan with she dancing in chromium earmuffs and bustier, singing sampled Spice Girls lyrics as they are surrounded by digitally created Cylon lookalikes.

As always, the translation of the song lyrics frequently leave ones eyebrows raised: the love tribute from Chitti to Aishwarya Rai Bachan: “Your eyes are mysterious Bermuda Triangles that one can get lost in … lips like sleeping zebras … waist a toddler’s chair.” The most bizarre is a sequence that takes place on location around Machu Picchu that involves lyrics such as “I am a five foot grown shrub/Nibble on me, I’m a goat … I am the tree/You are my woodpecker … Garnish me with pepper and spice/Taste your favourite soup … My plumed guinea now and then embrace me … My sugared spinach/Candy coated to the core/You fold my heart in two … Happy go lucky sensualist/Play me like an instrument.”

2.0 (2018) was a sequel. Superstar Rajini later made a cameo appearance as Chitti in the Bollywood science-fiction film Ra. One (2011).