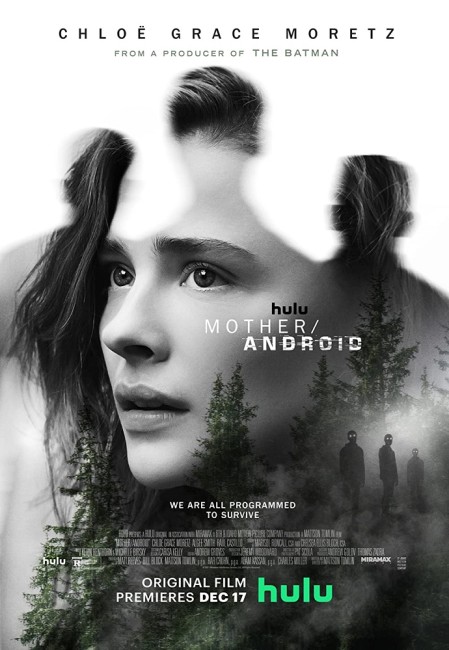 Georgia and her boyfriend Sam travel across country following the collapse of civilisation. Androids had been created to be used as servants but then rebelled against humanity. Georgia is nine months pregnant and they are trying to make it to safety in Boston so that she can give birth. After being thrown out of an army camp, they endeavour to make a dangerous journey across No Man’s Land.

Mattson Tomlin has been a screenwriter on the rise in the last couple of years, appearing with the scripts for the superpowers film Project Power (2020), which had apparently been the result of a bidding war, and the standout Little Fish (2020) about a pandemic that affects people with amnesia. This had him selected as writer of The Batman (2022). Tomlin had previously directed The Projectionist (2008) and Solomon Grundy (2012), neither being widely seen, before being given the directorial reins of Mother/Android.

I was hoping on the basis of the work he had delivered elsewhere, Mattson Tomlin would make Mother/Android into a defining classics among the fad for A.I./android films. I expected great things; I cannot think of an occasion when I have been more heavily disappointed. Mother/Android promises a delve into human-android relationships and the machine revolution. It takes place after the robot apocalypse has occurred and humanity and the machines are in a state of warfare, similar to the The Second Renaissance segments of The Animatrix (2003) or Terminator Salvation (2009). That said, apart from one okay scene near the start where android waiters at a party suddenly turn on the guests, and a later scene where they invade a military base, the machine revolution mostly exists on the periphery of the story.

Most of the film resembles a Post-Apocalyptic survival film, of people struggling in the aftermath of the collapse of civilisation. This is something that has potential. Other films like The Road (2009) and the recent underrated Light of My Life (2019) are stories of two people fighting to survive in a harsh realm after the collapse of society. Children of Men (2016) had done great things with the story of a man escorting a pregnant woman across a world in a state of social collapse. Or even Mad Max 2 (1981) and its assorted ilk, which turned the post-apocalyptic world into a kinetic action movie venue.

I was hoping that Mother/Android would find the urgency and emotional rawness of films like The Road and Light of My Life but Mattson Tomlin never does. There is nothing to Chloe Grace Moretz’s journey that has you rooting for her and hoping that she will make it to safety. The most the film ever becomes an action movie is a weak sequence with the two of them racing through the woods on a motorcycle pursued by drones. There is a slightly better sequence where Chloe ventures in to rescue Algee Smith from an android prison using a cloaking coat but even then you feel like the scene where she goes into labour just as they get away could have been played for far more dramatic impact – if I was writing the script, I’d have her go into labour in mid-rescue about the point that the fellow prisoner starts screaming while she still has to make it out of the complex rather than as Tomlin has it just at the fadeout as she gets away in the back of a van.

Mother/Android slips by with a bland lack of affect. I wanted to be engaged by it but the film offers a series of dull happenings and you feel uninvolved with any of them. I think Chloe Grace Moretz has been a talented child actress – Kick-Ass (2010) and Let Me In (2010) – although she has never done much to evince the same with her grown-up roles, which consist of a string of dogs like Carrie (2013), The 5th Wave (2016) and Tom and Jerry (2021) where anybody could have filled the role. Here neither she nor Algee Smith do much to convince theirs is a real relationship that has a life and affection that is anything more than two actors reciting lines.