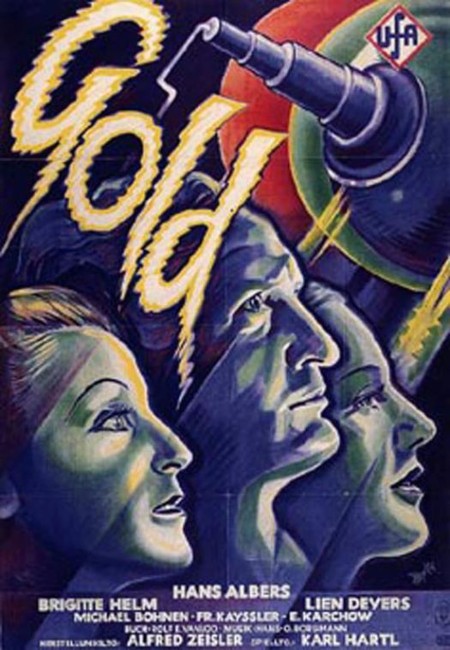 In Berlin, Professor Achenbach attempts to conduct an experiment that uses a powerful generator to transform lead into gold. However, the experiment is sabotaged by his assistant who is in the pay of others, causing a laboratory explosion in which Achenbach is killed. Sometime later, Achenbach’s associate Werner Holk is approached by henchmen of the industrialist John Wills and taken to meet Wills. Wills announces that he intends to replicate Achenbach’s experiments and Holk is recruited to come on board. He is taken to where Wills has built a massive laboratory under the ocean in Dunny, Scotland. As he prepares to make the first successful transformation of gold into lead, Holk is enticed by Wills’s daughter Florence. Certain that Wills was the one behind the sabotage of the initial experiment and responsible for the death of Achenbach, Holk plots revenge.

Gold was one of the films that came out of the great era of German Expressionism. Stylistically, it is not an Expressionist film – it does feature the characteristic giant sets but the lighting scheme are mundane. What it does draw on is the fascination with modern industrialisation that began in German cinema with Metropolis (1927). The 1920s and 30s were an amazing time of technological change. The first skyscrapers were being built, while the development of motorcars, the telephone, commercial airplanes and luxury liners were rapidly transforming society.

Metropolis and Fritz Lang’s subsequent Woman in the Moon (1929) represent the poles of dread and celebration with which German cinema regarded these technological changes – as being either something wondrous and amazing with the capacity to transform society or else as doomed and likely to enslave mankind. These polarities play out in several of the science-fiction films during the latter years of the Expressionist movement and into the sound era, from Metropolis and Woman in the Moon to Gold, F.P.1 Does Not Answer (1932) and The Tunnel (1933).

Gold is also very much a product of the economics of the era. It was made at the height of The Great Depression and in the decade just after Germany had undergone a catastrophic inflation crisis wherein almost all of the country’s money was rendered useless. Thus the immediate effect after the public announcement of the device that can produce gold is a montage of scenes of panic in the streets and world stock markets. The film gains its most interesting moments towards the end where Hans Albers heads a crowd of workers who confront technocrat Michael Bohnen, calling him a “murderer” and an “assassin”. You can almost see the film desiring to wave a placard and front a mob to vent loose at bankers and industrialists with all the pent-up anger at The Depression and inflation crisis.

The main problem that Gold is stuck with is that it was made only a few years into the advent of the sound era. Hearing people talk on screen was considered a major novelty for audiences so Gold has characters talk and talk and talk. They do almost nothing else – all of the action almost entirely transpires in terms of dialogue. The result is almost an entirely inert film. (Even then, the English-subbed version seen here and available on YouTube only runs to 102 minutes, missing nearly twenty minutes of the film’s original runtime). The other problem that the early sound era suffered from was that the equipment required to record the sound was large and bulky. Films of the late 1920s had discovered some amazing visuals but this disappeared with the advent of sound for the simple reason that cameras were too big to move fluidly.

The one advantage that the film offers is some amazing sets, in particular the massive laboratory that Wills constructs that comes with wall-sized control panels, a massive set of blast doors and the control house built with what look like giant sparkplugs on top of it. The film creates a marvellous piece of super-science at the climax where the generating process goes amok and the control room is flooded with massive arcs of electricity, before the entire laboratory explodes. The effects scenes were so impressive they ended up later being cannibalised in the Hollywood film The Magnetic Monster (1953).

The other intriguing thing about Gold is that it stars Brigitte Helm, alias Maria of Metropolis fame. It is fascinating to see her in a role where she is talking, for one. It is a relatively straightforward role but Helm has a presence that makes it anything but. Helm is tall, bony and angular. She has a peculiar heart-shaped face that is adorned with a hairstyle that looks like a strange bird with its feathers ruffled and a series of expressions that could either be seductive or the kind of shifty sidelong glances that silent movie mad people used to be characterised with. Unfortunately, the film fails to make worthwhile use of her. She is introduced as Wills’s daughter and someone who is tempting Hans Albers to forget his fiancee but the two merely have a single dinner together, after which he seems to want to avoid her altogether. You feel almost like the film has run away from any of the interesting dramatic possibilities here – a Hollywood film, for instance, would have blown the romance up and have Albers torn between the two women.

Gold was a successful film during its day. As was common for the era (before people discovered dubbing and subtitles), another version was simultaneously shot in French language also starring Brigitte Helm but otherwise with a different cast.

Austrian-born director Karl Hartl had a reasonable directorial career during this period. His only other genre outing was the earlier F.P.1 Does Not Answer (1932), a similar technological fantasy concerning the construction of a vast floating air runway in the middle of the Atlantic.