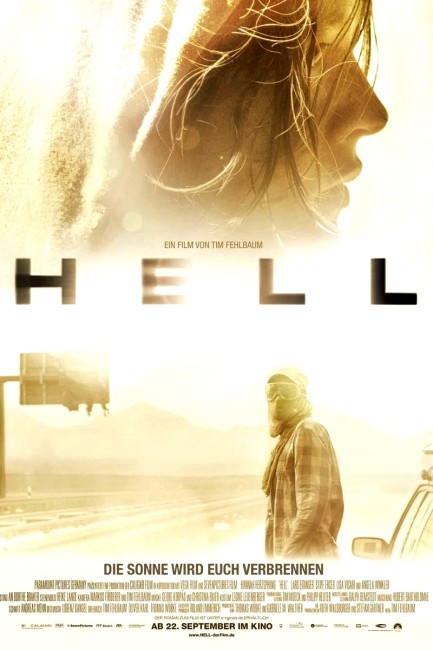 The year 2016. Temperatures worldwide have increased by ten degrees in four years, causing the collapse of civilisation. Leonie and her older sister Marie drive through the parched ruins with Phillip, hoping that they can find water in the mountains. As they stop at an abandoned gas station looking for supplies, a scavenger tries to break into their car and steal their food. This ends in a fight but Phillip bargains with Tom the scavenger and agrees to let him accompany them in return for his fuel supplies. They have to stop to remove a barrier blocking the road and at the same time venture down the hillside to search a crashed car for supplies. Back up above, scavengers appear and steal the car with Leonie inside. With Tom captured in a subsequent skirmish and Phillip wounded, Marie must set out on her own to rescue her sister.

Hell was a directorial debut for Swiss director Tim Fehlbaum. The production was a German-Swiss one, shot in the German language. Roland Emmerich, the director of massively scaled effects and mass destruction epics like Independence Day (1996), The Day After Tomorrow (2004) and 2012 (2009), serves as an executive producer. The film was released in English as Hell, which is the original title it was given in German, although in German this simply means ‘bright’ as opposed to referring to the place of damnation in the Christian afterlife. In the US, it was released as Apocalypse but known as Hell in most other English-speaking territories.

I do have an issue with the film’s premise about a world that has undergone a ten-degree rise of temperatures. The film never speculates as to the cause of such or dwells on the wider effects beyond the scope of the action before us – it would certainly result in a Global Warming scenario. However, I have doubts as to whether a ten-degree rise in temperatures would actually cause the collapse of civilisation. In winter when temperatures are regularly say zero degree Celsius, a ten-degree rise would still mean going out for the day wearing a coat. An average summer’s day for more temperate climates might be 20o Celsius so a ten degree rise would make things no different from the temperature at a more equatorial climate.

On the other hand, this would certainly make more equatorial and desert regions uninhabitable and drastically change the Earth’s environment in ways far more extreme than climate scientists are currently predicting. Would it cause the collapse of civilisation though? I doubt it – this ten-degree rise would not pitch the majority of the world into extremes that people are unable to tolerate living in. Not to mention that in many places that are affected people would just conduct business out of the heat of the midday/afternoon sun.

All of that said, Hell is a film that does very little to explore its premise. In fact, what we get is little more than a standard After the Holocaust film. There’s a standard lot with a group making the perilous journey across a wasteland in the aftermath of social collapse amid various encounters with marauders and a friendly community. The scrabble for survival – searching old gas stations for food, diving into tanks for gasoline, breaking open pipes to get any remaining water – is depicted with a harsh realism.

The surprise about the film is that though it comes executive producer by Roland Emmeruch it does not feature any of Emmerich’s trademark mass destruction sequences, rather is all fairly low tech and free of effects for the most part. There is a visual effects supervisor and visual effects house credited but it is not easy to pinpoint where their contributions are.

After setting up an original scenario, the disappointment of Hell is that Tim Fehlbaum does nothing to explore it any way. The same story could have been told as just a regular post-nuclear holocaust film, or even as a Backwoods Brutality film with the scavengers cast as backwoods hicks. The one good aspect of these scenes is German actress Hannah Herzsprung who gives an intent, focused performance as she is forced to set out on her own to rescue her sister.