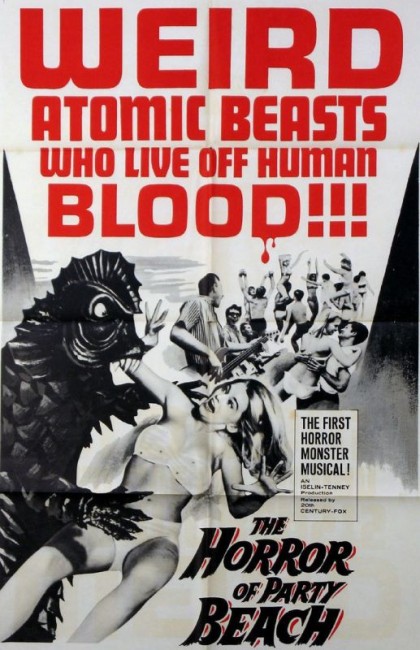 A chemical company has been dumping radioactive waste in the ocean not far offshore from a small Connecticut beach town. This causes a skeleton on the ocean floor to mutate into a sea monster. At a beach party, Hank Green’s girlfriend Tina flirts with Mike, the leader of a motorcycle gang, causing he and Hank to get into a fight. Tina swims off alone, only for the sea monster to attack and kill her. As Hank’s employer, the scientist Dr Gavin, is implored by police to find out what the monsters are, the creatures emerge and start killing people all over town, seeking to devour human blood.

The Horror of Party Beach has developed a major reputation as a Classic Bad Movie, one that can enjoy the company of other notorious films like Cat Women of the Moon (1953) Attack of the 50 Foot Woman (1958), The Creeping Terror (1964) and the infamous Plan 9 from Outer Space (1959). This was in large part due to The Horror of Party Beach‘s inclusion as one of the Medved Brothers The Fifty Worst Movies of All Time (1977).

The Horror of Party Beach was made by Del Tenney who had a brief career as a director of low-budget horror films during the mid-1960s. Around the same period, Del Tenney also made Psychomania/Violent Midnight (1963), The Curse of the Living Corpse (1964) (which was released on a double-bill with The Horror of Party Beach) and the notoriously retitled zombie film I Eat Your Skin (1964). After this, Del Tenney vanished for nearly 40 years before returning as producer of the slasher film Do You Wanna Know a Secret? (2001) and then directing the horror film Descendant (2003), before his death in 2013.

On the level of its basic premise, The Horror of Party Beach feels like it has borrowed the creature from The Phantom from 10,000 Leagues (1955), which featured an upright bipedal sea monster created by atomic radiation that emerged from the ocean to attack women. Here the Phantom has been multiplied several fold (well actually, there were only three creature suits built for the film) and pitted against a horde of rock’n’roll teenagers (who all seem well into their twenties if not thirties).

What contributes a considerable amount to The Horror of Party Beach‘s Z movie reputation is what must be the single most ridiculous monster in any B movie of the era, possibly of all time. When it emerges out of the ocean for the first time with its ping-pong eyeballs and ridiculous little cockatoo crest, not to mention the widely derided (rubber) hot dogs in lieu of teeth, one ends up in hysterics at the ludicrousness of the sight. Indeed, The Horror of Party Beach‘s credibility is shot in the foot from the moment we see the creature come to life in a long drawn-out lap dissolve sequence on the ocean floor where the fish swimming past on the sea bottom have simply been double-exposed and then that priceless moment where its ping-pong eyeballs roll up and open.

Half of the time it feels as though The Horror of Party Beach has been construed as a vaudeville stand-up routine. In between the main action on the beach, the teenagers are constantly cracking bad jokes. Del Tenney’s camera focuses in close-up on a girl’s dancing bikinied butt and then pulls back to two observing guys: “Hey that reminds me – did I bring my hotdog buns?” There are several other priceless exchanges. In one scene, a guy comes up and taps a girl kissing another guy on the shoulder, takes his place and continues kissing the girl until she breaks to note: “Johnny, I’ve never let anyone kiss me like that before,” to be told “My name’s not Johnny, I’m Irving,” whereupon she shrugs “What’s in a name?” and continues kissing him. In another scene, a couple are kissing and she stops and asks him: “Do you believe kissing is unhealthy?” only to get the answer “I don’t know I’ve never been – ” “You’ve never been kissed?” “No, I’ve never been sick.” Or the bikinied cutie who asks: “Hello Charlie, do you believe in bathing beauties?” which gets the answer “I don’t know I’ve never bathed one.” All that seems lacking is the drum roll and a groan from the audience.

The Horror of Party Beach is probably no better nor any worse than any other Beach Party film or low-budget monster movie being made around the time. It carries itself with a passable energy and basic professional competence and never drags or wears out its welcome. The film is at its best during about the first fifteen minutes where Del Tenney seemingly conducts a tick list of 1960s exploitation elements, throwing together partying youths making out on the beach, biker gangs (which were apparently played by a real biker gang that Del Tenney recruited for the film) and the monster attacking bikinied babes. There is a classic scene with strumpet Marilyn Clarke flirting with the leader of the biker gang, causing straight-laced hero John Scott and the lead biker (Agustin Mayor) to get into a fight on the beach while cheered on by a circle of teenagers. With slasher movie morality, she then swims off to pose on a rock in her bikini and become the monster’s first victim.

One of the classic elements of The Horror of Party Beach is the presence of a nowadays completely forgotten rock’n’roll group The Del-Aires who are probably the geekiest looking wannabe Beach Boys band ever formed. (Apparently, The Del-Aires put out less than a handful of singles, recorded the soundtrack for The Horror of Party Beach and split up immediately after). The lead singer has a crazy energy as he bounces about as though determined to be the life of the party, while one of the guitarists is surely the nerdiest Buddy Holly lookalike to ever strut a stage. The lyrics of their songs, which include the classic The Zombie Stomp (which is accompanied by teens doing a dance where they stumble around like zombies before collapsing), are downright hilarious.

The main problem with The Horror of Party Beach is that not a lot happens outside of the rock’n’roll numbers. Immediately after the beach fight sequence and the attack on Marilyn Clarke in the first few minutes, the film abandons the beach party aspect altogether. In any other film, the bikers might hang around to cause more trouble or be secondary nemeses but they are never seen again. The scientific investigation into the menace doesn’t take up much screen time – two scenes where everybody stands around discussing things, followed by John Scott travelling to New York City to get supplies of sodium and returning in time for everybody to throw chunks of it at the monsters as they attempt to abduct Alice Lyon. (Amusingly enough, most of the discoveries about what to do are made or suggested by the Black maid Eulabelle Moore). Most of what transpires in terms of plot that carries the drama forward could be condensed into about ten minutes of screen time. The rest of the film’s 78 minutes are padded out with rock’n’roll numbers, the aforementioned vignettes among the kissing couples on the beach and endless scenes of the monsters abducting women.

Peculiarly, the monsters, despite their claimed need for human blood, seem to prefer abducting only women and Del Tenney throws in a number of scenes of them carrying girls off like some incarnation of a 1940s pulp magazine cover. Indeed, despite their bloodlust, the monsters seem to be plain old red-blooded males who get uncontrollably worked up about girls – there is even a scene where one of them gets so worked up as to attack a storefront mannequin.