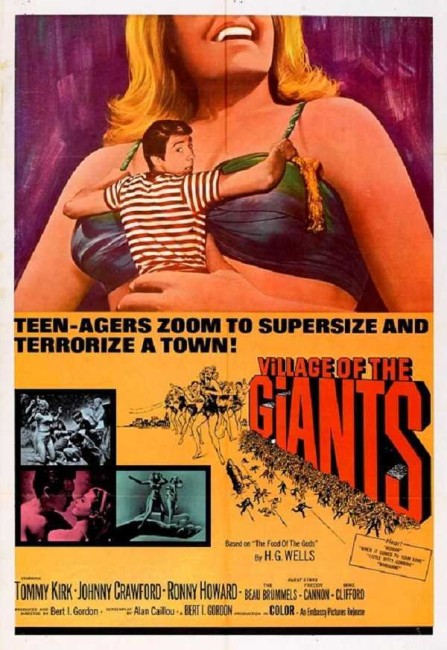 In the small town of Hainesville, Mike is present as his girlfriend Merrie’s kid brother Genius succeeds in creating a formula in his basement laboratory that makes the cat, the dog and some ducks giant-size. Mike thinks that they can make millions by using the formula to solve the world food crisis by making giant-size animals. However, a group of teens wander into town and see the giant ducks after one of the ducks accidentally strays into the dancehall. The teens then break into the basement and steal the formula. They use it to make themselves giant-size and proceed to terrorise the town and make the adults bow to their commands. Mike rallies the town’s teenagers to find a way of defeating the giants.

In the 1950s, director/screenwriter/producer and fairly much one-man band Bert I. Gordon became famed for his cheap giant bug and giant people films. Gordon was even nicknamed Mr B.I.G. (after his initials) for such. Gordon’s films included The Cyclops (1957), Beginning of the End (1957), The Amazing Colossal Man (1957), Earth vs the Spider (1958), War of the Colossal Beast (1958), and just for variety the miniaturised people film Attack of the Puppet People (1958), as well as the later likes of The Food of the Gods (1976) and Empire of the Ants (1977). Not many of these are particularly good films.

With Earth vs the Spider, Bert I. Gordon happened onto the teen monster movie that had become all the fad in the late 1950s/early 1960s with the likes of I Was a Teenage Werewolf (1957), I Was a Teenage Frankenstein (1957), The Blob (1958), The Horror of Party Beach (1964) and Monster from the Surf (1965). Trying to tap the same fad in Earth vs the Spider, Gordon interspersed monster attacks with rock’n’roll numbers.

By the time of Village of the Giants, the entire film has become a rock’n’roll teen movie. Upon becoming giants, for instance, the first thing the kids do is not establish their tyranny over the normal-sized people or marvel at their newfound size, but rather to dance in front of the rest of the townspeople. The opening scene consists of about five minutes of teenagers dancing in the rain and rolling in the mud to music on a car radio. The film frequently stands still for extended rock’n’roll numbers. Indeed, the first half-hour of the film features six such numbers – Gordon serves up three in a row at one point. The Beau Brummels at least turn out some halfway listenable songs.

Village of the Giants celebrates the sense of youthful vibrancy and cautious anti-authoritarianism into which many of these teenage monster films tapped. That said, Gordon makes a much more conservative film here than many of the abovementioned others. The teens are clearly divided into two camps – the bad ones who take the drug and become the giant-sized tyrants and the decent ones who stand up for tradition. The bad teens espouse such lines as: “The adults, honey, this ain’t gonna be their world anymore, it’s going to be ours.”

Village of the Giants is a film that Bert I. Gordon is clearly not taking terribly seriously. There is an embarrassingly silly scene where a giant-sized duck invades the dancehall and starts dancing too. Rather than be startled, most of the teens join in and groove along with it. Gordon gets mildly risqué, adding a number of shots focused on girls wiggling their bikinied butts and breasts. There is the prize camp image of a normal-sized guy trapped hanging down between the bikinied cleavage of a giant-sized girl. In the final scene, the teens depart town only to encounter a group of dwarves arriving to get hold of the drug!!!

Gordon certainly has a better budget than is usually the case with most of his films. It allows him to film in colour, for one. The effects and process photography when it comes to the giantism effects still looks cheap and shabby though. There is one conceptually challenging scene where the teens driving hot rods and motorbikes try to rope the legs of a giant-size Beau Bridges and bring him down. Alas, the scene fails through poor effects – we don’t even see Beau Bridges and the other teens in the same shot, while his giant legs look more like denuded tree trunks than human legs.

Village of the Giants also features an eleven-year-old Ron Howard, later of tv’s Happy Days (1975-84) fame and then director with the likes of Splash! (1984), Cocoon (1985), Willow (1988), Apollo 13 (1995), How the Grinch Stole Christmas (2000) and Oscar-winner with A Beautiful Mind (2001), as the geek kid scientist who invents the formula. Pop singer and dance choreography Toni Basil, mostly known in the 80s for the pop single Mickey (1982), also turns up as one of the teens and choreographs the dance routines – she’s the one in red that can be seen go-go dancing in a cage.

Gordon also had a tendency to in-reference his own films, long before filmic in-referencing became an obsessive fad, and at one point one can see one of the giant teens reading the June 1963 issue of Famous Monsters of Filmland that has a Basil Gogos painting of War of the Colossal Beast on the cover.

Bert I. Gordon Gordon reputedly based the film on the H.G. Wells novel The Food of the Gods (1904), a serious work about the discovery of a formula that creates giant animals. Gordon later returned to the same source work minus rock’n’rolling teens with The Food of the Gods (1976). The title of the film has clearly been conceived in an attempt to emulate the success of the hit British alien invader film Village of the Damned (1960).