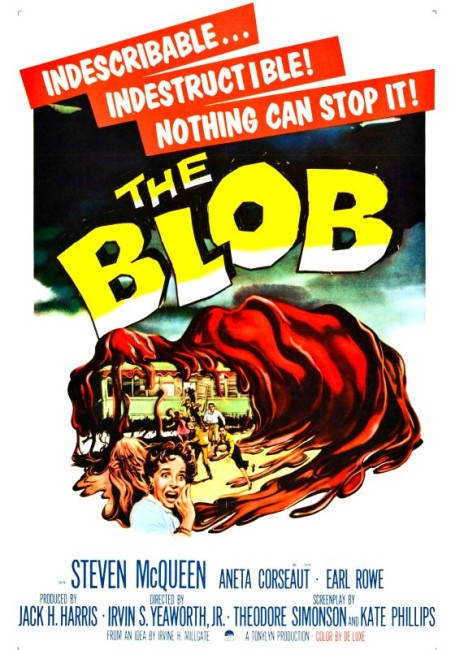 A red blob emerges from a fallen meteorite and promptly devours the arm of an old man who touches it. Teenager Steve Andrews and his girlfriend Jane Martin find the old man and rush him to the doctor’s surgery, only to see both the old man and the doctor devoured by the blob. The authorities disbelieve their story. With the blob growing in size and eating everything in its path, they gather together other teenagers to defeat the menace.

The Blob is a classic 1950s science-fiction film, although one always suspected its reputation was one that existed solely on its ability to epitomise the 1950s B SF movie. Its very title alone instantly conveys the cheesiness of the 1950s B science-fiction film. The creature seems like an existential aggregate of the looming symbols about threats of The Other and the devouring of the social order that America seemed so edgily concerned about in the 1950s.

The Blob also arrived at the time that filmmakers were suddenly discovering, following the runaway successes of Rebel Without a Cause (1956) and I Was a Teenage Werewolf (1957), that teenage audiences were a market force. As has been noted by many essayists, the spate of teen monster, rock’n’roll and hot rod movies, came to symbolise and tap into the rock’n’roll generation’s increasing feelings of alienation from their parents.

In The Blob, teenagers spend a good deal of time hanging loose, are almost inseparable from their cars, indulge in chicken races, but inside it all is a sincere message about wanting to be taken seriously by adults. As the friendly cop in the film says: “Just because some kid smacks into his wife on the turnpike doesn’t mean it’s a crime to be seventeen years old.”

In the end, the film opts for a more conservative social commentary than either Rebel Without a Cause or Teenage Werewolf, showing that the social threat has to be overcome in cooperation between the adults and the teens. Although in its own mildly subversive way, the film does offer the image of the school principal leading a gang of teens to save the day by smashing down the doors of his own school with a rock.

On the minus side, The Blob is more interesting as subtext than it ever is as drama. Director Irvin S. Yeaworth Jr has a major problem with pace – the mildly exciting blob scenes alternate with long periods of inaction where characters sit about and tediously talk. The film is best in the first half than in the latter. The scenes with the blob crawling up the stick to devour the old man’s hand and the images of his devoured torso are nicely gruesome.

However, once the blob gets bigger it loses much in the way of threat. The cuts away to its cranberry sauce mass sitting and pulsating are not that threatening and how in reality its snail’s pace would allow it to catch anybody is a mystery. The low budget is inadequate at even coming near appropriating the carnage and devastation of the blob – characters stand and talk about a never-seen off-screen fire, while the image of the blob covering the diner is merely a drawing. The blob concept was first done a couple of years earlier and much better in the British X the Unknown (1956).

There was a belated comedy sequel – the lame Beware! The Blob/Son of Blob (1972), which was played as a comedy, and a much better remake The Blob (1988). A further remake was announced in 2010 purportedly from Rob Zombie, although has yet to be greenlit. Blobbermouth (1990) was a version of the film released with a dubbed-over comedy soundtrack by the live cabaret group LA Connection. The Blob was also spoofed in Monsters vs Aliens (2009) and makes an appearance in Hotel Transylvania (2012), while Alien Trespass (2009) is an affectionate homage.

Director Irvin S. Yeaworth Jr and producer Jack H. Harris reteamed on two further genre films – the much better-budgeted The 4D Man (1959) and the revived dinosaur/caveman effort Dinosaurus! (1960). Jack H. Harris has also produced various cheapies like The Adventures of Taura: Prison Ship Star Slammer (1986), as well as John Landis’s first film, the genre spoof Schlock (1973). In later years, Harris became notorious as a penny-pinching producer, attaining the most fame when he brought up the rights to two student films and expanded them out as feature-length releases – the results being the occult Equinox (1970) and John Carpenter’s celebrated first film Dark Star (1974).