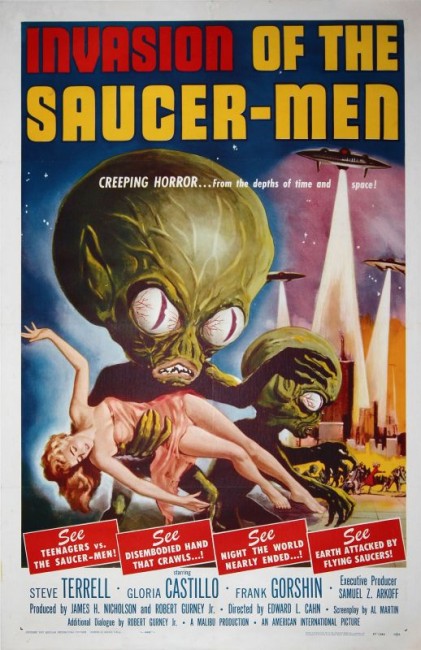 aka Invasion of the Hell Creatures

Pint-size aliens emerge from a saucer outside the town of Hicksburg and start killing people using their hypodermic fingernails. The only witnesses are a group of teenagers hanging out at the nearby Lover’s Lane but the authorities disbelieve the teens’ story. The only hope is for the teenagers to band together to defeat the menace themselves.

As with most of these films, the plot centres around a group of teenagers encountering the creature where the principle problem is not so much how to defeat the creature(s) but how to have their knowledge of the menace taken seriously by adults and authorities. “I guess we better hope that the next person who meets one of these is a 100% certified adult,” comments one of the doubted teens at one point.

Unlike most of the other teen monster films, Invasion of the Saucer Men takes itself reasonably tongue-in-cheek – at least that is what the jaunty comedy score would seem to indicate. It is never entirely successful at this. There is some weak comedy with the teens attempting to feed beer to Larkin’s cow. It is uncertain whether the scene with the disembodied hand threatening Gloria Castillo in the car and sneaking up to tap her on the shoulder is meant to be funny or scary. The alien frame-up job and the way the attempts to prove the story keep folding back on the hero have their slight amusements.

The aliens themselves are the best thing about the film, an amazingly evil looking bunch of goblins, as created by famous 1950s monster maker Paul Blasidell. They are only briefly shown, which adds to their nastiness. The disembodied hand with its attached eyeball and the images of evilly dripping hypodermic fingernails are rather neat too. On the whole though, Invasion of the Saucer Men is dreary.

There was a terrible remake conducted by Larry Buchanan with The Eye Creatures (1965).