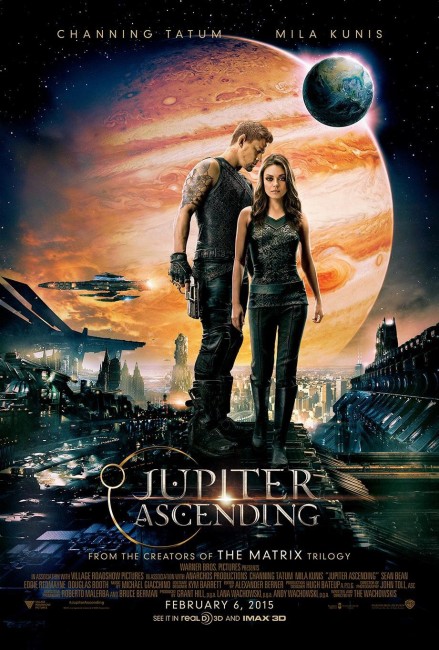 Jupiter Jones was born at sea after her astronomer father was murdered by Russian police and her mother left for life in the US. She now lives in Chicago and works as a cleaner. Her boyfriend Vasiliy has persuaded her to sell her eggs to earn money and she has signed up under the name of her friend Katherine Dunlevy. This brings her DNA to the attention of intergalactic bounty hunters. As she goes in for the operation, rival bounty hunter Caine Wise rescues her from an attempt to kill her by aliens posing as the doctors. He whisks her away on hover boots furiously pursued by the aliens through the skies of Chicago. Caine explains that the recurrence of her strands of DNA has marked her as the reincarnation of the matriarch of the House of Abrasax. This makes her the queen of Earth, something that Jupiter finds ridiculous given her lowly status. Taking her aboard the base hidden inside the Red Spot of Jupiter, Caine, himself a genetic crossbreed that is half-wolf, half-human, introduces her to the scientific marvels of the milliard species that inhabit the galaxy. At the centre of this is the millennia-old House of Abrasax, the original seeders of humanity on Earth. However, this has brought the matriarch’s three children, each the powerful owners of important sectors of the galaxy, seeking to take advantage of her inheritance. What Jupiter does not realise is that her people’s longevity is based on constantly rejuvenating their bodies in a serum distilled from humans and that Earth has been cultivated for the sole purpose of being bred to overflow so that its people can now be harvested.

The Wachowskis – originally billing themselves as The Wachowski Brothers before Larry’s post-op sex change to become Lana (with Andy following suit subsequent to the release of this film) – are cult figures. This is all due to the enormously influential hit of The Matrix (1999). The Wachowskis mystique is amplified by their aversion to publicity of almost any kind, they having it contractually stipulated that they do not do promotion for their films. On the other hand, there is a certain critical consensus (not one shared by this author) that The Wachowskis are one-hit wonders. Their two Matrix sequels The Matrix Reloaded (2003) and The Matrix Revolutions (2003) let down almost who praised the first film. Outside of that, their success rate has been uneven at the box-office and critically divided. Their gorgeous live-action adaptation of the Japanese anime Speed Racer (2008) was a critical and commercial flop; the ambitious era-spanning Cloud Atlas (2012) split audiences and critics and did middling box-office, although their tv series Sense8 (2015-8) was a popular hit. V for Vendetta (2006), which they wrote/produced, is well regarded, although the dynamic and exciting Ninja Assassin (2009), which they similarly produced, received only mediocre reviews. None of this changed with Jupiter Ascending, which received divided advance word and poor US box-office.

I happily still hold the cheerleading banner for The Wachowskis. Mainstream critical consensus is a strange and fickle beast that far too often wants to make blanket assumptions based on very subjective things like ‘being bored’ or ‘I didn’t understand what was going on’ and is notoriously intolerant of such notions as embracing the conception and ideas of a work. Science-fiction is often a genre that requires people give filmmakers a certain amount of rope to see where they are going. It is worth noting that the initial critical view of 2001: A Space Odyssey (1968) was one of confusion and boredom, while people also tried to tell George Lucas that audiences would ever understand the world he created in Star Wars (1977).

You have to be willing to engage with The Wachowskis’ films on a very different level to popcorn entertainment and/or the two-minute soundbite review. That said, Jupiter Ascending did not seem that promising. The initial trailer with Channing Tatum in funny ears and androgynous makeup seemed more absurd than exciting, while the film’s release was pulled from July 2014 to February of 2015, often a dead zone for studio releasing schedules, and did not presage well as a work that Warner Brothers had any faith in, while the critical and audience consensus about the finished result seemed universally negative.

One of the things I like about The Wachowskis is that they take familiar genres – the martial arts film, virtual reality themes, an anime tv series from the 1960s, the ninja film – and completely reinvent the genre every time by pushing the action scenes and visuals to a heretofore unheard of level, while throwing in a mind-bending series of ideas. With Jupiter Ascending, they have taken on the space opera. The film could easily have emerged as one of the numerous Star Wars clones. Indeed, you feel like the plot was conceived by The Wachowskis after a watching of Flash Gordon (1936) or its camp remake Flash Gordon (1980) whereupon they set out to elevate its melodramatic plot devices of ordinary mortals plunged into an interstellar adventure up against an intergalactic monarch (or royal dynasty).

There is the same sense in Flash Gordon (as well as Star Wars) of a galaxy inhabited by multifarious species, while the heroine here is even accompanied by a human-animal hybrid, Channing Tatum’s Caine, who at one point says he has more in common with a dog than a human, who could easily sit alongside Flash Gordon‘s Hawk Man, Lion Men and Shark Men. Both films also centre around villain’s climactic plans to marry the heroine. (You also cannot help but think the choice of Jupiter Jones as the name of Mila Kunis’s heroine is The Wachowskis tipping their hand that they are fans of the 1960s/70s juvenile detective novel series The Three Investigators).

Another thing I like about The Wachowskis is that they push the creative bar on their films into a stratosphere that is light years ahead of any other competitor. You could compare Jupiter Ascending to the Star Wars prequels – both films come with enormous creativity placed into their backgrounds but with George Lucas you feel that he has done precious little to think about the sociology, the rationale and cultures of the worlds he creates in anything beyond novelty costuming depth.

The Wachowskis love coming up with wild rationalisations and here create a fascinatingly original universe – one where the Earth is no more than an intergalactic breeding pen created by another species of human that has existed since before the dinosaurs; where the animal hybrids of Flash Gordon are rationalised as being genetically crossbred for military use; the idea that reincarnation is nothing more than the same genetic sequence repeating itself after numerous possible combinations; that the reason for the Red Spot of Jupiter has been storming for hundreds of years is that it secretly houses an alien base; or in the creation of a complex series of political machinations and rivalries that challenge something of the complexity of Frank Herbert’s Dune (1965).

There is the odd moment this slips into the slightly loopy – like scenes of bees all paying obeisance to Mila Kunis – but mostly the film rocks it. As always, their films are jam packed with astonishingly creative pieces of throwaway gadgetry that are so casually layered it has you going wow every few minutes.

The other distinctive thing about The Wachowskis is how they come up with amazing action sequences that are light years ahead of everybody else’s game. The film has you stunned from the sequence a few minutes in where Channing Tatum emerges from the fertility clinic into an ambush by the mercenaries that suddenly erupts into a barrage of raygun bolts before Tatum activates his anti-gravity hoverboots and flies up around the sides of buildings deflecting laserblasts with his portable forcefield. This is left for dead a few minutes later during the exhilarating sequence with the mercenaries pursuing Tatum and Mila Kunis through the skies of Chicago first on his hoverboots and then in an appropriated flyer, while destroying entire buildings, bouncing off vehicles, narrowly avoiding trains and even diving under water. It is a sequence that in its sheer exhilaration rivals the best of George Lucas.

The visual effects throughout are expectedly stunning – there are some shots of ships gracefully emerging out of the storm clouds of Jupiter or the ice rings of Saturn constructed for the pure beauty of it that give you fanboy orgasms. The climax of the film is a breathless sequence filled with mass destruction, people fighting on the edge of collapsing structures and colossal fireballs erupting below, before the extraordinarily triumphal last minute rescue.

Of all The Wachowskis’ films to date, Jupiter Ascending ranks as the most unpretentiously enjoyable, the least concerned with the epic meaning of it all and just a determination to create a rollicking good adventure. There is a good deal more humour than usual, not something Wachowski films are exactly noted for, with some overlong comic relief scenes cutting back to Mila Kunis’s Russian family. There is an extended sequence in the middle with Mila Kunis going through an intergalactic inheritance claims bureau that seems played for broad comedy that doesn’t suit the rest of the film – although the sequence does include a cameo from Terry Gilliam, unrecognisable behind a beard and wild hair, inserted as homage to his bureaucratic nightmare classic Brazil (1985).

I am still to warm to Mila Kunis as an actress of lasting substance. She at least passes through the role here delivering all that is required of her adequately. Channing Tatum on the other hand is an actor that has been stuck with pin-up status but is constantly making a series of intelligent casting choices that show there is far more going behind that big goofy smile. Here, outfitted with a gold-dyed leonine hairstyle and goatee, elf ears and mascaraed makeup job, the role could have collapsed into ridiculousness for another actor (try to imagine a he-man action hero like Bruce Willis or Jason Satham pulling it off), but Tatum plays fiercely determined and contrarily emerges with a sexual sizzle on screen.

Much of the film was shot in England and I was a little disappointed at The Wachowskis for settling for the casting of the intergalactic royalty with the standard cliches of upper-class British accents. Among these, Eddie Redmayne, whose name was big right then as a result of his Best Actor win at the Oscars for The Theory of Everything (2014), gives an okay performance of languidly bored arrogance, which is ruined by the decision to play it through a silly voice. Sean Bean gives a strong supporting performance.