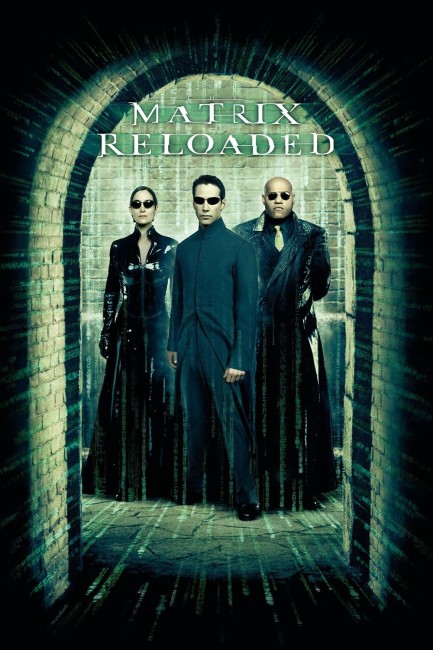 The AIs are drilling towards the city of Zion, the last bastion of humanity at the centre of the Earth. With only 72 hours before they arrive, Morpheus stands up before the council to argue that humanity’s only hope lies with The Prophecy and in trusting that Neo is The One. The Oracle directs Neo to find The Keymaker, who has the ability to unlock the backdoors of The Matrix. Neo, Morpheus and Trinity rescue The Keymaker from a powerful programmer known as The Merovingian in a fight up against The Merovingian’s assassins, the AIs and multiple copies of a now rogue Agent Smith. With The Keymaker’s help, Neo penetrates a backdoor in the Matrix where he encounters the Matrix’s designer The Architect and begins to discover his true purpose as The One. In doing so, he must make a choice between either saving Zion or the life of Trinity.

The Matrix (1999) was one of the genuine landmarks of science-fiction cinema in the 1990s/00s. It was a huge box-office success and developed an amazing cult following. It was one of the few science-fiction films of the decade to have a genuinely breathtaking scope of ideas. It created striking and unique martial arts moves that were instantly imitated and became the benchmark for just about every other action film out there. Indeed, by the time that The Matrix Reloaded premiered, the moves have become so prevalent they were being parodied in films as widespread as Deuce Bigalow, Male Gigolo (1999), Scary Movie (2000), Cats & Dogs (2001), Shrek (2001), Kung Pow: Enter the Fist (2002) and Austin Powers in Goldmember (2002).

As the advertising promises, 2003 was indeed the year of The Matrix. The Matrix Reloaded was the first of two Matrix sequels that were shot back-to-back by the Wachowski Brothers, along with The Matrix Revolutions (2003), which was released six months after this film. At the same time, The Wachowski Brothers also authorised The Animatrix (2003), a feature-length collection of animated shorts set in the world of The Matrix. Added to that was the usual baggage of merchandising tie-ins, even a series of Heineken ads featuring Carrie-Anne Moss and Enter the Matrix, a computer game that contains appearances from some of the stars.

The two films were an epic-sized production, rivaled only in scale in recent memory by Peter Jackson’s Lord of the Rings trilogy. The budget for both scaled the $300 million mark, which included the building of a mile and-a-half stretch of highway in Alameda, CA. It was also a production that was beset by more than a few problems, including the deaths of singer Aaliyah, originally cast in the part of Zee now played by Nona Gaye, and Gloria Foster who plays The Oracle, as well as the financial collapse part way through production of Bullet Time, the effects company originally responsible for the amazing slow-motion virtual pans in the original. Not to mention how after The Matrix Reloaded premiered, it was hit by a bunch of nuisance lawsuits – from actor Marcus Chong from the original who sued the producers for reneging on verbal agreements, after he was written out and replaced by Harold Perrineau when his ego and salary demands grew too high; to Larry Wachowski’s wife suing for divorce, claiming he left her for a dominatrix.

To say that The Matrix Reloaded arrived as the most anticipated sequel of its year would be an understatement. It was probably an anticipation second only to the eagerness with which the whole world awaited Star Wars Episode I: The Phantom Menace (1999). However, the results almost certainly disappointed almost all fans of the original. The first film took you with the mind-bending grasp of its story, its breathtaking cool and a series of unique action visuals that made your eyes pop at what you were seeing. This time the novelty of the reality-bending ideas is gone, while the martial arts moves have been copied by every other action film. The Matrix Reloaded was thus faced with a much harder sell to try and scale the heights that the first film achieved. All that was left for it to do are the two things that are left to most sequels – either to complexify the story or to up the scale of things in the original, of which The Matrix Reloaded chooses to do both.

In this regard, The Matrix Reloaded proves disappointing. It neither settles in with either the breathtaking originality or the plays of ideas and visuals that The Matrix did. It takes much longer to get started. The Wachowski Brothers at times seem to be padding the film with character interplay and family scenes, even a bizarre Zion rave sequence. There are more daylight scenes and, as a result, The Matrix Reloaded is missing the dark, subterranean, green-lit atmosphere that seemed an essential part of the original.

Most of the original cast return, although their roles seem to hold less stature than they did the first time. Keanu Reeves is stripped back to the point he is almost a caricature of a dark-avenging graphic novel superhero, outfitted in a knee-length black mandarin coat that flaps up around him like a cape. Carrie-Anne Moss looks uncommonly pallid and ill where she gives a performance that mostly consists of skintight vinyl poses. Laurence Fishburne looks much beefier than he did first time around, while Hugo Weaving’s Agent Smith is disappointingly sidelined as a principal nemesis.

The Wachowski Brothers certainly create some spectacular action sequences. There is a breathtaking opening dream sequence with the camera twirling to follow Carrie-Anne Moss as she dives out a window and she and an opponent shoot at one another during the fall down to the ground, with bullets whizzing past in slow motion. There is a show-stopping martial arts sequence with Keanu Reeves taking on literally dozens of Agent Smiths all at once in various wall-bouncing, flipping and mid-air twirling action. The showcapper is the highway chase sequence with colliding vehicles, people jumping from vehicle to vehicle and tearing the roofs off, Carrie-Anne Moss on a motorcycle, Laurence Fishburne in a martial arts battle atop a truck and the spectacular slow-motion head-on collision between two trucks.

However, there is the tendency of the action sequences to feel boiler-plated on. It feels as though the Wachowski Brothers and Yuen Woo-Ping conceived them on the drawing board and then tried to find a way to drop them into the plot – the pieces of plotting that lead up to these action sequences often feels thinly contrived. There is also the tendency of the action sequences to go way beyond the bounds of probability. The Wachowski Brothers began work as comic-book artists and clearly Neo has been reconceived as a superhero here, conducting various Superman-like flying moves.

However, this is also something that changes the bounds of the film. Whereas The Matrix was simply a cool film with some amazing martial arts sequences, The Matrix Reloaded is more of a superhero film. With that comes the problem with besets many superhero stories in that the action goes so beyond the bounds of probability that it ceases to be real any longer – there is the sense as Keanu Reeves twirls around a pole kicking hundreds of Agent Smiths or flies in to save people from explosions at the very last second that the film has become so insistently spectacular that anything can and will happen. Is there any point in the film that you truly believe that Keanu Reeves is physically in danger and can not do something utterly impossible to escape?

In terms of story, The Matrix Reloaded also does what a good sequel should but again with mixed results. It begins to answer many of the questions that the first film left unanswered – What is The Prophecy? What is The One’s destiny? Who is The Oracle? Who created The Matrix? These are intriguing questions and the Wachowski Brothers start to answer them in interesting ways. There is clearly much that will be answered in The Matrix Revolutions but the answers provided here are also less satisfying.

In all cases, the Wachowski Brothers muddy the question – they make The Prophecy and The Oracle into irrelevant or delusory issues, while revealing that Neo is not The One but the Seventh. Now there are a great many more unanswered questions. The film hints at predestination and raises some interesting philosophical points about causal determinism and free will. However, the revelation that Keanu Reeves is The Seventh creates much confusion. Does this mean that the entire Matrix has been replayed six times before? In that the Matrix was created by the AIs to house humanity in a mass illusion, is The Architect referring to the preceding Neos as existing in the Matrix only or in the real world? If the latter, does that suggest that the world outside of the Matrix is illusion too? Who is the Keymaker and is he meant to be a program, a programmer or a real person outside the Matrix?