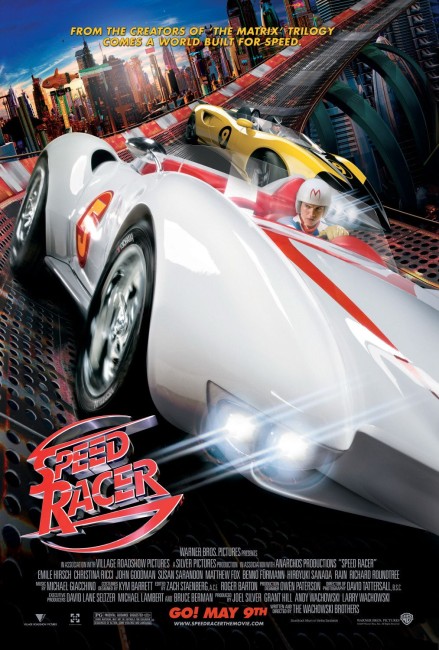 Young Speed Racer grows up with a family that builds racing cars. From a young age, Speed can think of nothing else except racing. Growing up, Speed becomes a racing driver in his father’s Mach 5 design. After winning a big competition, Speed is offered lavish sponsorship for the Grand Prix by businessman E.P. Arnold Royalton. However, Speed decides to decline the offer, after which an angry Royalton promises that he will get nowhere because the outcome and winning order of the Grand Prix is always fixed between the sponsors. Speed determines that he will enter the Grand Prix despite. He defies his father’s wishes and enters the brutally tough cross-country Casa Cristo race, the winner of which will automatically be granted entry to the Grand Prix. However, Royalton does everything he can to sabotage Speed’s chances.

Speed Racer was the fourth directorial film from the Wachowski Brothers, Andy and Larry (or these days just The Wachowskis, Lana and Lilly post their respective gender reassignments). The Wachowskis wowed the entire world with their second film, the groundbreaking The Matrix (1999). There, The Wachowski Brothers did amazing things with visual effects artistry and martial arts that turned both genres on their heads. The ideas they injected into either genre have been endlessly imitated since. The Wachowskis failed to quite follow that success up with their two sequels The Matrix Reloaded (2003) and The Matrix Revolutions (2003), which scored in terms of action/visual effects sequences but flopped in terms of reducing the originality of the first film to muddled mysticism and series of confused loose ends. Several years later, Larry now Lana Wachowski returned to direct/co-write The Matrix Resurrections (2021).

It is not certain yet whether one can dismiss the Wachowski Brothers as one-hit wonders. Outside of The Matrix series, their work is frustratingly divided – they wrote/produced the excellent V for Vendetta (2006), which turned Alan Moore’s graphic novel series into a powerful contemporary political allegory, yet on the other hand were uncreditedly responsible for the re-edits that turned The Invasion (2007) into a box-office flop but then subsequently produced the amazing Ninja Assassin (2009), before returning to direct the massively ambitious cross-historical drama Cloud Atlas (2012) and the space opera Jupiter Ascending (2015), as well as creating/producing the tv series Sense8 (2015-8). Speed Racer looked set to be confirming the downward spiral, receiving a negative critical reception fairly much universally and a box-office response that only earned back about a third of the film’s $120 million budget.

Speed Racer is based on the Japanese anime series Mach GoGoGo (1967-8), which was translated into English as Speed Racer. (The series was in turn based on a popular manga). The original series, which ran for only 52 episodes, concerned the adventures of young Speed Racer as he attempted to become a championship racer, while dealing with various villains who sought to prevent him. One of the influences on Speed Racer was the James Bond films and so Speed drove the Mach 5, which was outfitted with an array of gadgets, including buzzsaws, bulletproof bubbles and devices that allowed the car to convert to a submarine or take off into the air. The show has developed a modest cult audience. A live-action Speed Racer film has been planned since the early 1990s, having been announced by directors like Richard Donner, music video director Julien Temple, even reportedly Alfonso Cuaron and Gus Van Sant, while the central role was to have been at various points filled with names like Johnny Depp, Keanu Reeves and Henry Rollins.

Visually, Speed Racer is one of the most amazing films that one has seen in some time. In turning the anime into live-action, The Wachowski Brothers pump it up with a series of visuals that turn it into a totally mad visual confection. Imagine the original anime translated into a live-action equivalent of one of those time-lapse photographs of city’s nightlines where cars appear as streaks of multi-coloured light. Every frame of the film comes determined to display just about every colour of the rainbow all at once. Every vehicle has its own coloured speed trail.

The racetracks are amazing architectural marvels that send cars spinning through pretzel-shaped hairpin bends, between the columns of massive vaulted buildings, up into the sky in giant helix-shaped hoops or across narrow elevated bridges. The cars perform amazing acrobatic stunts – firing out springs to jump into the air, conducting vertical and horizontal leaps and spins, grinding their wheels into the cockpits of other drivers. It is frequently as though the Wachowski Brothers are trying to replicate the Bullet Time martial arts moves from The Matrix – but having cars kicking one another about and conducting mid-air flips rather than human combatants.

To understand what kind of revolutionary things the Wachowski Brothers do with Speed Racer, one should contrast it to most of the other live-action films that have been made out of cartoon series. Look at the likes of the likes of The Flintstones (1994), George of the Jungle (1997), Mr Magoo (1997), Dudley Do-Right (1999), Inspector Gadget (1999), The Adventures of Rocky and Bullwinkle (2000), Josie and the Pussycats (2001), Scooby-Doo (2002), Fat Albert (2004), Alvin and the Chipmunks (2007), Underdog (2007), Yogi Bear (2010), The Smurfs (2011) and Jem and the Holograms (2015). All of these are light-hearted films that replicate cartoon physics and pile on slapstick visual gags. Most of these play the original down at a level of inanity and usually pile on gags aimed at contemporary audiences.

By contrast, the most The Wachowski Brothers give us some comic relief with young Spritle and Chim-Chim the monkey, which gets corny at times, and a silly slapstick fight scene with a ninja (but then that was there in the original anime). The only English-language cartoon adaptation that comes vaguely near the ballpark of Speed Racer is Michael Bay’s Transformers (2007), which took the original (also an anime series) and blew it up into a loud and bombastic action/special effects vehicle. Perhaps the closest one might get is the Japanese-made Casshern (2004), which also adapted an anime tv series into live-action and pumped the original up with constantly over-ornamented artistic excess to the point that it takes place in a stylised world of its own.

Speed Racer is driven by artistic pretension no doubt. While many switched off and responded with cliches about all style, no substance, or that is was visually tiresome, what they failed to see was that was the sum of the film. It is like criticising Andy Warhol’s work for being repetitive – that is precisely the point of it. Speed Racer is a film that has been made for the sheer glorious visual excess of what possibilities the medium can be put to. You have to sit back and watch the film as the equivalent of visual eye-candy that comes at one like it is mainlining a dose of ADD.

Speed Racer is gorgeous in the visual excess of look and design that the Wachowski Brothers have piled on. Some scenes – like the Casa Cristo rally – are exhilarating in the sequences with cars conducting martial arts leaps through the desert or along mountainsides. Certainly, Speed Racer‘s box-office flop makes it seem a glorious and unique folly that is unlikely to be repeated by anybody else. Completely groundbreaking visually, it may well spell some doubt for the future of the Wachowski Brothers, but is the most delicious and edible piece of eye candy that one has seen in theatres in some time.

Driving the film is a strong message about artistic freedom, of doing something for the passion that runs through one’s blood and the love of doing it, vs corporate sponsorship, which regards the business of racing as irrelevant and what matters is the corporate stock of who is sponsoring the pre-determined winner. The Wachowski Brothers make a fair message here. As one watches, it is hard not to substitute filmmaking for racing, of the tug of war between creating films as art vs commercial product, and read some personal statement of integrity on the part of the Wachowskis into the film. Of course, with Speed Racer‘s box-office flop, the message of doing something for the pure love of doing it gains another entire level of ironic truth.