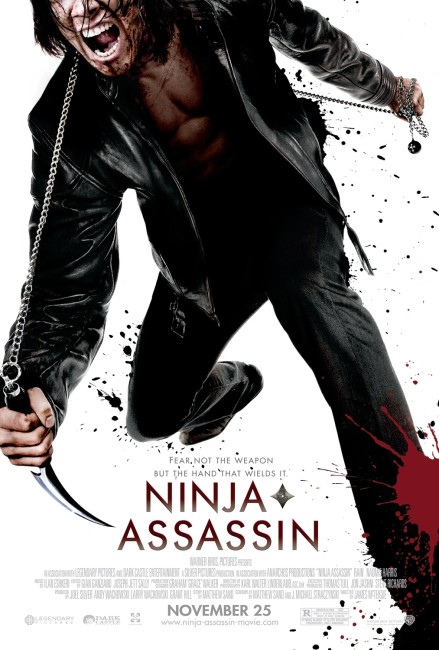 Mika Coretti, a researcher for the Europol agency, is rebuked by her superior Ryan Maslow when she turns in a report speculating about the existence of ninja clans. She is told that the last agent to do so, Alexi Sabatin, was blacklisted before dying in mysterious circumstances. Mika visits Alexi’s widow who gives her the research file he had built up about the Ozu Clan. Mika returns to her apartment to find an envelope of black sand – the clan’s calling card – waiting for her. As the clan come to eliminate her, she is aided by one ninja who eliminates the others and then introduces himself to her as Raizo. He was raised among the Ozu Clan but went rogue after the clan sensei Ozonu killed the female postulant he loved. Mika is now forced to go on the run with Raizo as both the Ozu Clan and Europol come hunting them.

The ninja film was one of the mini-themes that came on the tail end of the martial arts cycle of the 1980s. While most American martial arts films drew from models established by Hong Kong cinema during the 1960s and 70s, the ninja film was one theme the English language genre largely invented for itself. There had been a few sporadic and little known Japanese ninja films during the 1960s. The first English language appearance of ninja on screen as far as I am aware was in the James Bond film You Only Live Twice (1967). The American ninja genre began with martial arts hits like The Octagon (1980) and Enter the Ninja (1981). The genre had largely died away about the point it spawned gimmicky fads like the Teenage Mutant Ninja Turtles, the 3 Ninjas children’s films or parody titles like Zombie vs Ninja (1987), Cheerleader Ninjas (2002) and Tongan Ninja (2002), even an erotic film 9½ Ninjas (1992).

Apart from sporadic efforts like The Hunted (1995), Ninja Assassin is the first major attempt to make a ninja film in well over a decade and probably the first ever Western effort to be made as an A-budget film with a big publicity campaign. Ninja Assassin comes backed by The Wachowski Brothers. It is directed by James McTeigue, a former assistant director to the Wachowskis who previously made V for Vendetta (2006) under their aegis, as well as conducted uncredited reshoots for The Invasion (2007). The Wachowskis themselves have shown a more than passing interest in martial arts films. Their signature film The Matrix (1999), wherein they employed master Hong Kong fight choreographer Woo Ping-yuen, revolutionised the presentation of martial arts on screen through the combination of CGI effects and wire work and subsequently created its own copycat style. (The scenes where Keanu Reeves enters the martial arts simulation in The Matrix contains a list of styles that is a virtual tribute checklist to the Wachowskis’ favourite martial arts films). Further, they created an absurdist comic-book called Shaolin Cowboy (2004-7), while ninjas also turn up (albeit more comically) in their anime-adapted Speed Racer (2008).

The Wachowski Brothers have found themselves in the unique position of being regarded as intellectual action movie directors, if such is not an oxymoron. The Matrix (and to a lesser extent its sequels) impresses as much for its cool and ideas as it does for its boundary-breaking action moves. The same could be said for Ninja Assassin. The plot, co-written by newcomer Matthew Sand and J. Michael Straczynski, the cult creator of tv’s Babylon 5 (1993-8) and screenwriter for the Clint Eastwood film Changeling (2008), Thor (2011), Underworld: Awakening (2012), World War Z (2013) and later co-creator with the Wachowskis of the tv series Sense8 (2015-8), is nothing world-shattering. There are undeniable similarities to the manga adaptation Crying Freeman (1995), which also concerned a Japanese martial arts assassin who is hunted by his clan after going rogue and developing feelings for an ordinary woman who is caught up in the middle of action during the course of the story. The story arcs that both films follow are almost identical.

All the fun of Ninja Assassin comes in the cool of the moves, the way the film is redefining and seeking depth in the accepted iconography of ninja cinema. Where Michael Sand and J. Michael Straczynski’s script stands above other ninja films is in their determination to make it a story that delves in and finds the soul of a ninja. The ninja are played for the maximum mystique that they are associated with on screen – emotionless, inscrutable, with near-superhuman abilities to move with stealth – which are combined with the standard martial arts cliches of brutal training regimes. The film hovers on the borderline of fantasy – the ninja have mystical powers of healing and stealth, Sho Kosugi has a move that allows him to reach into someone’s stomach and cause maximum pain without penetrating the skin, while at the climax he reveals the power to move at an accelerated rate.

With V for Vendetta, James McTeigue was relatively restrained in the action department but more than proves his hand here in a series of superbly enervated visuals that light the film up with actinic flamboyance. Indeed, Ninja Assassin is as visually breathtaking and exciting as it was watching The Matrix for the first time ten years ago. This is no more evident than the opening scene where a brash yakuza acolyte in a tattoo parlour receives an envelope of black sand and is scorn is abruptly silenced as the screen is rapidly and bloodily wiped in a series of severed arms, sword guttings and bodies being beheaded, with the shadowy assailants only being seen in subliminal flashes. It is an incredibly vivid opening that jolts every member of the audience bolt awake like a triple shot of espresso mainlined direct to the veins and presages well for what is to come.

Subsequently, there is an exhilarating sequence with the ninja invading the underground hideout where Rain is being held prisoner, climaxing in Rain eliminating attacking ninja en masse with a whirling blade on the end of a chain and fleeing through the complex from a hail of shuriken that fly like machine-gun fire and finally engaged in a sword fight with an opponent bare-chested amid the flow of oncoming traffic on the street. The film climaxes on an amazing set-piece with Rain and a seemingly supernaturally empowered Sho Kosugi showing down in a fight to the death amid a burning dojo. The pace and exhilaration that McTeigue puts into these scenes has a kinesis that totally leaves any action film of recent memory for dead.

The show is largely dominated by South Korean pop star Rain (who had previously appeared in the Wachowskis Speed Racer). Rain maintains a lethal and incredibly well buffed presence throughout the film. Opposite him is a coldly autocratic Sho Kosugi, the Japanese born, US-resident star of many of the original ninja films of the 1980s. Naomie Harris, who came to attention as the female lead in 28 Days Later (2002) and the voodoo queen in Pirates of the Caribbean: At World’s End (2007), is passable as Mika, although the role is largely one that requires her to take a passive role to the action.

James McTeigue subsequently went onto make the horror film The Raven (2012), featuring Edgar Allan Poe up against a serial killer, and the non-genre action film Survivor (2015) and the home invasion film Breaking In (2018).

(Nominee for Best Director (James McTeigue) at this site’s Best of 2009 Awards).