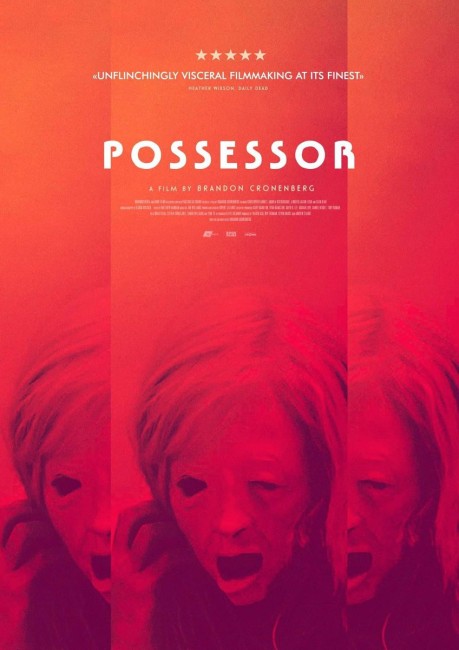 Tasya Vos works as an assassin using a process that projects her mind into the body of a selected individual who is then used to eliminate someone close to the target. At the end of the assignment, she is required to place a gun in her mouth and shoot the host just before she is extracted from their body. This time she wavers in her decision before being shot by police. Afterwards Tasya experiences lingering side effects including flashbacks and identity blurring as she tries to reconnect with her husband Michael and son Ira. She is called in for a new assignment – that of taking over the body of Colin Tate, the boyfriend of Ava Parse, in order to eliminate Ava’s father John Parse, the CEO of a corporation. As she takes over Colin’s body, Tasya starts to experience blackouts. She completes the assignment but then finds that she is unable to extract herself and is forced to go on the run in Colin’s body.

Possessor was the second film from Brandon Cronenberg. As everyone commenting on Brandon’s films notes, his more famous father is David Cronenberg, the cult director of films like The Brood (1979), Scanners (1981), The Fly (1986), Dead Ringers (1988), Crash (1996), A History of Violence (2005) and Cosmopolis (2012), among others. Brandon had previously worked as a special effects assistant on his father’s eXistenZ (1999) and directed two short films before making his debut feature with Antiviral (2012), an impressive science-fiction film set in a future where there is an industry built around celebrity viruses.

In his films of the 1970s and 80s, David Cronenberg was fascinated with new scientific ideas – the psychic powers of Stereo (1969) and Scanners, the parasites in Shivers (1975), the psychoplasmics in The Brood, the teleportation device of The Fly – and the ways people react to these, particularly in terms of sexual fetishism. Later Cronenberg films like Dead Ringers and Crash take the science out and are works about the psychological reaction and fetishism of inanimate objects like surgery and car crashes. You can draw quite reasonable parable about the people obsessed with cataloguing strange new medical disorders in David’s Crimes of the Future (1970) and the obsession with celebrity viruses in Brandon’s Antiviral.

Like his father, Brandon has a preference for science-fiction subject matters. Brandon has yet to jump into horror territory – or at least making science-fiction films that straddle both the SF and horror genres – but makes films that are not dissimilar to his father in the sense that they take a science-fiction idea – celebrity viruses, bodyswapping assassins – and concern themselves with the human reactions and various permutations that the idea can be put to.

The last couple of years have seen some standouts treatments of the bodyswap theme with Every Day (2018) and Lifechanger (2018), two films in which a body-hopping entity tries to reconnect with the girl it loves as it passes through various bodies. Possessor comes with the fascinatingly original premise of bodywapping assassins. The only film that came anywhere near this was Dreamscape (1984) with its assassins who enter the dreams of others. There have been somewhat similar action films such as Self/less (2015) and Criminal (2016) where the memories of one person is imprinted into the mind of another. Perhaps the closest we have to Possessor is the Joe Haldeman novel All My Sins Remembered (1977) about an intergalactic assassin who is surgically altered to become other people but remains haunted by those he is required to kill and the Canadian film Incontrol (2017) where university students stealing a device that allows them to inhabit the bodies of the successful people on campus.

Possessor gets your attention from its opening scene where we follow Gabrielle Graham as she passes through a function and then calmly and bloodily stabs a man to death then puts a gun in her mouth but seems unable to pull the trigger before being shot down in a hail of bullets by the arriving police. The scene then pulls back as Andrea Riseborough emerges from the mindmeld device and is subject to a battery of questions by Jennifer Jason Leigh where she seems to be struggling to remember objects familiar to her, while a subsequent visit to her husband (Rossif Sutherland, another of Donald’s sons) shows her in a banal domestic scenario in the midst of which she keeps having bloody flashbacks to the murder.

The idea of the heroine struggling with loss of her identity in the process of a bodyswap is a fascinating premise for a film. Brandon Cronenberg makes the film highly watchable from about the time that the hit on Sean Bean starts to go wrong and Andrea Riseborough is unable to extract and is forced to go on the run inside Christopher Abbott’s body. Brandon’s direction is maybe a little on the low key side sometimes – you could easily see this as a film that another director built out as a tight thriller or even an action film – but the script develops some fine twists during its latter third before reaching a grim conclusion.

Like his father in his earliest films – Stereo, Crimes of the Future, Shivers – Brandon has an eye for architecture and interior decoration that suggests a cool disquiet future. He creates a series of memorably perverse images that rival his father – particularly one in which Tasya is having sex with Tuppence Middleton while in Christopher Abbott’s body and we get momentary visions of Andrea Riseborough astride Tuppence with a naked erect dick.