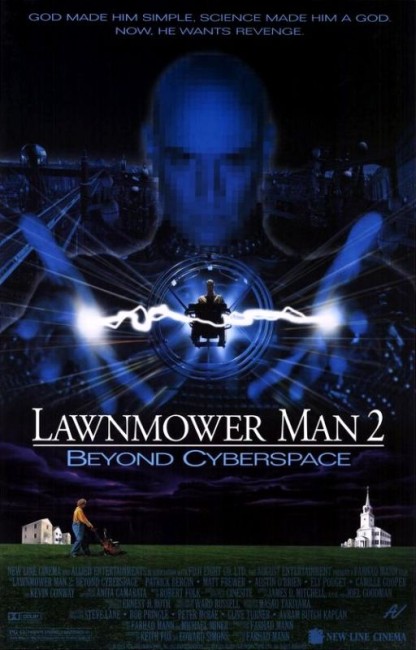 Jobe survives and is taken away by the Virtual Light Institute where he is rehabilitated in Virtual Reality. His mind becomes the cornerstone of the company’s plan to relocate their computers inside cyberspace. However, a group of homeless children and the reclusive computer genius Dr Benjamin Trace realize that Jobe is unstable. They discover that he is trying to obtain the encryption sequence that will allow him access to every programme in the world so that he can bring about the downfall of society. As a result, everybody will seek refuge in the city he has built in cyberspace and accept Jobe as their messiah.

The Lawnmower Man (1992) was far from a classic – it was an ill-informed and badly written science-fiction story that crudely exploited a fascination with the new technologies of Virtual Reality and cyberspace. As science-fiction, it was a B-movie the entire way – just one that had been dressed up with some nifty CGI effects. Nevertheless, it seems to almost be a classic when one sits down to watch this sequel.

The Lawnmower Man seemed written by people with a naive grasp of computing but the sequel seems to have been written by computer illiterates. It has no idea how computers, Virtual Reality, encryption or cyberspace works at all. The ‘information superhighway’ goes from a metaphor to an actual uplink. Cyberspace is treated as some alternate dimension that has ontological physicality.

The script tosses up stupid ideas like moving a computer network into cyberspace – the equivalent would be trying to move the projector showing a film inside the projected image on-screen. Or the bizarre idea that crashing systems and utilities everywhere in the world would make the whole populace want to seek refuge in cyberspace – one keeps wondering would this not also turn off the computers that support cyberspace? Of all the Virtual Reality films that sought to exploit the first Lawnmower Man, Lawnmower Man 2: Beyond Cyberspace is one of the silliest and least informed.

Even setting aside the inanity of its plot, Lawnmower Man 2: Beyond Cyberspace fails on the level of mindless prettiness that at least made the first film watchable. Where the first film inspired a new revolution in CGI animation, the effects here are cheap and threadbare with some of the same shots being repeated throughout.

Matt Frewer, doing a malevolent take on his Max Headroom (1985, 1987-8) persona, goes wildly over the top but at least appears to be having fun. The usually fine Patrick Bergin looks laughably silly, gone native and decked out in dreadlocks and with feathers in the hair.