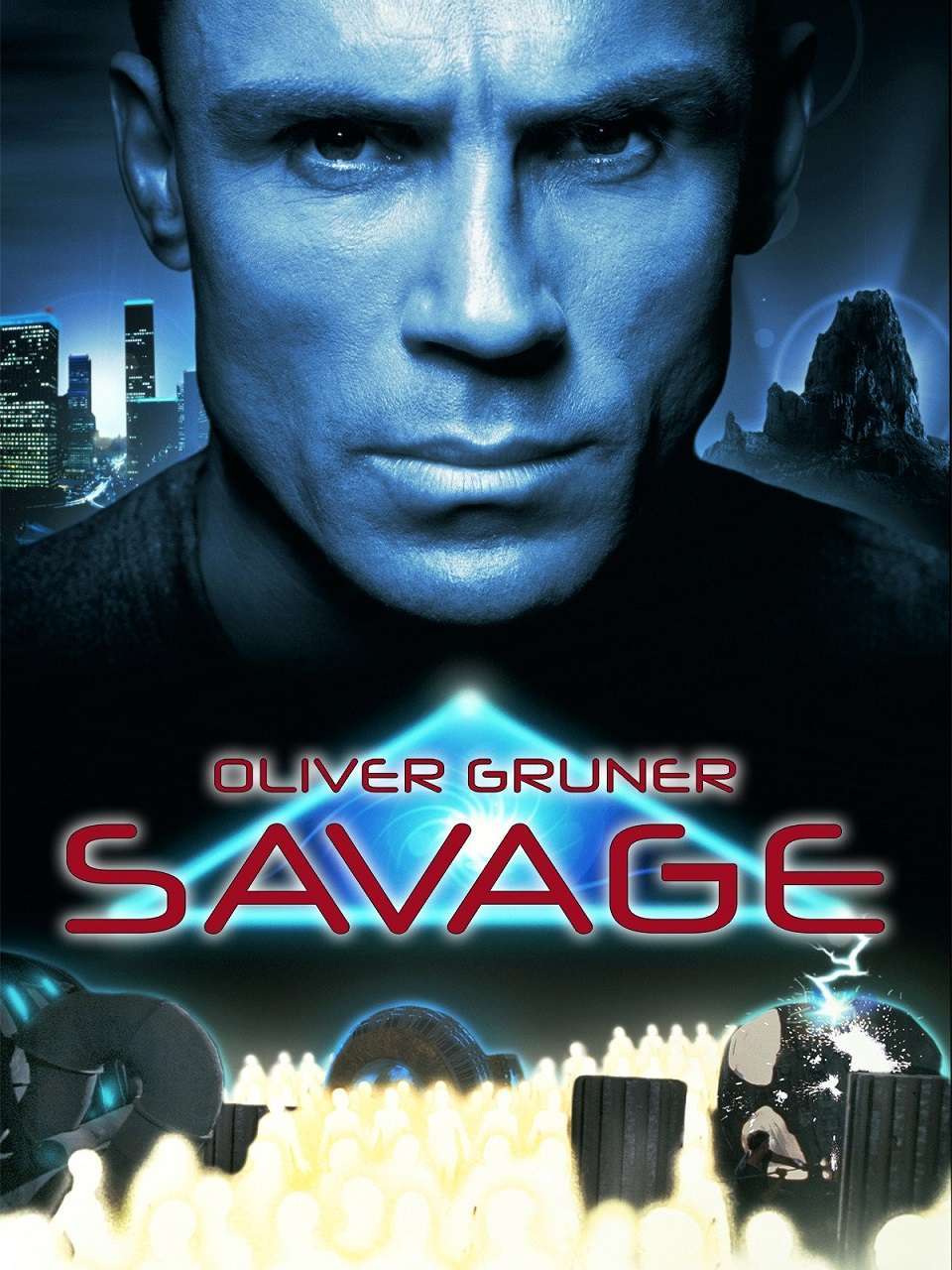 Rancher Alex Verne survives an attack in which his wife and daughter are killed and he is shot at point blank range. He is placed in a psychiatric institution where he retreats from the world and refuses to speak for several years. He then suddenly recuperates, makes an escape from the hospital and goes to live as a wild man back on the ranch. Aliens appear to him in a cave and enhance his simian ancestry, giving him greater strength and agility. Travelling to the city, he is captured as a vagrant but is immediately sought by Reese Burroughs, the ruthless CEO of the Virtual Reality game company The Titan Corporation. He goes on the run with police officer Nicky Carter, trying to stop Burroughs’ plans to open up an alien artifact that contains the secret of how the aliens, who founded Atlantis, raised humanity from the apes and discovered immortality by moving themselves into cyberspace.

Savage comes from Israeli-born director Avi Nesher. Nesher debuted with She (1983), a post-holocaust film that is so staggeringly whacked-out it is hard to tell if it has been made by someone akin to a latter-day Edward D. Wood Jr or it is trying to be camp. Avi Nesher subsequently redeemed himself with the quite good brainwashing action thriller Timebomb (1991) and the fascinatingly surreal Drew Barrymore horror Doppelganger (1993). He also made the voodoo film Ritual (2002), his final genre work, before returning to Israel in the mid-2000s and working as a director/producer there. Nesher also founded Mahagonny Productions, which was active during the late 1990s and made a handful of B-budget sf/action hybrids such as Automatic (1995), Mars (1996), The Outsider (1996), Legion (1998) and The Minion/Fallen Knight (1998).

As Avi Nesher’s films go, Savage unfortunately falls down somewhere in She territory. It is not quite the same mind-boggling, compulsively-bad experience that She was but definitely comes close at times. Savage is certainly a bizarre experience, as much for one not only having no idea where it is going, as not even what type of film it is trying to be, from one moment to the next.

The film starts out seeming like it is going to be a typical action movie revenge scenario with gunmen killing Olivier Gruner’s family, he going into catatonic silence in an asylum and then breaking out. It is then that the film starts to get weird as Gruner returns to his ranch and we see his progressive reversion to barbarism. A few minutes later, glowing aliens appear out of primitive cave paintings on the wall and use their super-science to enhance Gruner’s simian ancestry and turn him into a Neanderthal superman.

The film then flips to a standard Cyberpunk future (on the cheap) where Olivier Gruner becomes hunted by a sinister corporation that produces virtual videogames. At this point, why the corporation is hunting him and what they are trying to get from the aliens becomes a headscratching puzzle trying to follow. It involves something to do with the fact that the aliens somehow discovered the secrets of immortality and managed to relocate themselves in cyberspace – wherein the film seems to treat cyberspace as though it were an actual place rather than the metaphor formed out of several computers linked by telephone lines. Gruner seems to get clues as to what is happening from a videogame (the audience is not so lucky).

The film ends on a climax that has been filched from Raiders of the Lost Ark (1981) with the ancient alien artifact being opened. Making any sense out of this is a genuine challenge. It is certainly one of the most conceptually whacked out films one has seen in some time.

The script comes from regular Nesher co-writer Patrick Highsmith, who is possibly a pseudonym for Nesher himself (it is also the name of the fictional screenwriter hero in Doppelganger). As usual, Highsmith names his characters after popular artists in a particular genre – in The Outsider, for example, it was film noir actors. Here Highsmith has named all the characters after adventure or thriller writers. Thus we have characters named Nick(y) Carter, Marie Belloc, Lester Dent, Eric Rohmer, Mickey Spillane, Edgar Wallace, a Reece Burroughs (after Edgar Rice Burroughs) and a Julie [Jules] Verne.