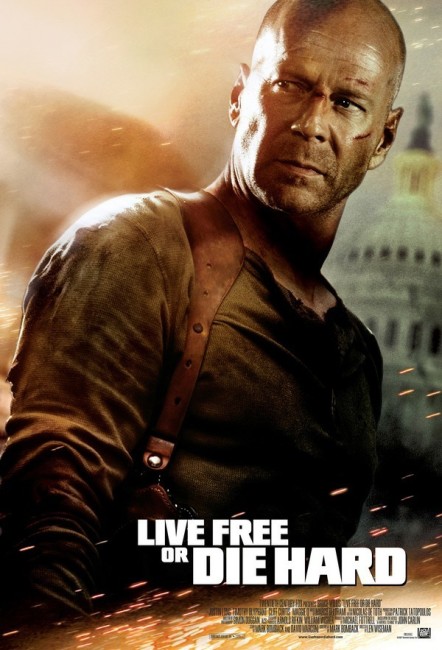 After hackers break in and shut down FBI computer systems, John McClane, now a senior detective with the NYPD, is assigned to go and pick up hacker Matthew Farrell for interrogation as a potential suspect. McClane arrives at Farrell’s apartment just as hitmen try to eliminate Farrell where he manages to save Farrell’s life. Pursued by the hitmen, McClane tries to get Farrell to the FBI in Washington D.C.. Meanwhile, the people behind the hack attack wreak havoc by switching traffic lights, sending the stock market into disarray, triggering anthrax alerts in government buildings and turning off power grids across the country. This is something that is nicknamed a firesale in hacker circles, designed to plunge the country into total chaos. With Farrell’s help, McClane discovers that the person behind the attacks is former FBI computer specialist Thomas Gabriel. McClane sets out to stop Gabriel’s real plan to steal the country’s entire financial records.

Live Free or Die Hard, known as Die Hard 4.0 in international territories, is the fourth film in Die Hard franchise. The series began back in the 1980s with Die Hard (1988), which was Bruce Willis’s first major starring role on the big screen. Die Hard had a deceptively easy premise – Bruce Willis plays a lone man who has to single-handedly defend a skyscraper as it is taken over by criminals on Christmas Eve. Die Hard was a huge hit and would certainly have to stand up on any Top 10 list of action movie classics. Since then the premise – of one man defending some kind of building or large vehicle against armed occupiers – has become one of the modern action movie templates and has been endlessly borrowed by other films.

Before Live Free, Die Hard was sequelized twice. First up was Die Hard 2 (1990) where original director John McTiernan was replaced by the perpetually awful Renny Harlin who promptly blew the modestly contained original up into a big-budget action film of improbably oversized set-pieces. This was followed by Die Hard With a Vengeance (1995) where John McTiernan returned to the driving wheel and made half a good film – the first half where bad guy Jeremy Irons has Bruce Willis running around the city in a series of psychological games, before the second half became taken over by even more over-the-top action set-pieces.

Aside from original director John McTiernan, who is listed here as a producer, Bruce Willis is the only common figure from the other Die Hard films. The new director this time is Len Wiseman. Len Wiseman previously appeared with two genre films – Underworld (2003) and its sequel Underworld: Evolution (2006), which concerned a secret war across the ages between clans of vampires and werewolves. In Underworld, Wiseman displayed a cool eye for glistening Gothic poses, although by the time of Evolution this had been taken over by a mindlessly spectacular array of CGI-assisted action sequences.

Sitting down to watch Live Free or Die Hard, the one thing that is immediately noticeable is how the action movie, the nature of movie heroism/villainy and indeed the state of the world had radically altered since 1988. In the mid-1990s, the action movie became suborned by the CGI revolution and propelled towards creating larger and larger scenes of spectacle for their own sake, whereas in comparison Die Hard is restrained in terms of action set-pieces. During this time, the movie hero has become someone much grimmer and more flawed. Most importantly, the backdrop against which the films takes place is a completely different America. Die Hard took place in the great Reaganite bubble economy of the 1980s; Live Free or Die Hard on the other hand comes in an America where the overriding sense is of fear – fear about terrorism and about vast catastrophes on American soil post 9/11 and post-Hurricane Katrina.

Sitting watching Live Free or Die Hard‘s feats of plotting and technological credulity, one was reminded of just how much the film resembles the improbabilities and plotting contortions of tv’s 24 (2001-10), which likewise comes from production company 20th Century Fox. Indeed, Live Free or Die Hard could easily serve as a plotline for 24 – all that seems missing is the time counters on the screen and the constant revelations of traitors on the side of the good guys. In fact, the plot about a massive hack attack and net shutdown being conducted as a feint to distract from another more sinister activity is very similar to a plotline that was conducted at the start of 24‘s fourth season, while the country-wide attack used here was then borrowed by 24‘s seventh season. Equally so, both are similar in their politics. Jack Bauer is a hero who embodies the ethos of the George W. Bush White House – of the necessary employment of torture and abandonment of civil liberties in the battle against a greater evil. Live Free or Die Hard is all about Bruce Willis’s John McClane having been reconstructed as a post-9/11 hero who is now fighting a shadowy plot to wreak catastrophe upon the American nation.

Whereas all the other Die Hard films fell into strictly mundane realms, no matter how improbable their action scenes, Live Free or Die Hard falls into the parameters of being science-fiction by virtue of its imagined catastrophic scenario of a hack attack across the entire US information network. Indeed, the computing technology on display is so preposterous that it should have Live Free or Die Hard correctly placed in the arena of fantasy. The film has the implausible notion that because the entire USA is connected across an information network, this means that hacking said network would give access to data systems anywhere. The film seems to have no idea that major corporate and government data systems are protected by a mass of firewalls and security protocols – one might be able to penetrate one of these with cleverness or a great deal of effort but what we are talking about is thousands of highly protected organisations, each with their own individual security systems. At another point, we have fantasy technology that allows the identification of one individual wanted by the hackers from a single line of dialogue heard in the background as one agent talks on FBI communications bands.

As with the previous Die Hard sequels, Live Free or Die Hard has only ever been constructed around a series of spectacular action set-pieces. Len Wiseman frequently pushes these towards an improbable point where you just sit nodding going “ohhh right” – Bruce Willis crashing a vehicle through a fire hydrant where the eruption of water knocks out a helicopter-borne gunman overhead; he launching a police car into the air to blow up a helicopter; charging through the corridors of a power plant with Maggie Q on the hood of an SUV and then fighting with her while the vehicle is wedged halfway down a lift shaft.

The silliest and most undeniably spectacular of these is the climactic sequence, which has Bruce Willis fleeing down a highway in a truck and its rig while being shot up by a fighter plane, with freeway overpasses collapsing behind the truck, the trailer and roof being torn to shreds by gunfire, the truck hanging on the edge of a collapsing off ramp and Bruce jumping onto the back of the plane as it is damaged by falling debris and left hovering pilotless after the pilot ejects. It is a sequence that is as entertainingly spectacular as it is preposterous.

The sad thing about most of these action sequences is how easy it is to sit back and go “nice show that the stunt and visual effects people are putting on” without ever engaging with any of it on an adrenalin level. The CGI spectacular has reached a point that the more each action film tries to top what went before, the more it recedes into the level of eye candy without affect. Particularly noticeably, Live Free or Die Hard includes an impressive effects shot of the White House blowing up, which featured prominently in the film’s trailer, but feels incredibly contrived in terms of any justifiable place it has in the film.

While on most levels, Live Free or Die Hard is a completely by-the-numbers action movie of mindlessly spectacular action sequences and ludicrous technological feats, the one thing that almost saves it is the Die Hard series’ greatest asset – Bruce Willis. Once again, Bruce plays with the natural charisma, flip cocky wit and unflappable cool under fire that got him through the previous films. It is his wry wit, honed to perfection here, that carries the film and gives it a human face. Certainly, without Bruce Willis’s presence, Live Free or Die Hard would be a forgettable film.

Perhaps in recognition of Bruce Willis’s advancing years, he is given a youthful sidekick in the person of Justin Long’s hacker. The film writes much self-consciously cutsie banter between the two of them – arguing about classic rock, the manipulation of the media and so on. Even the scene where Bruce fights with Maggie Q around a control room the scene is undercut by their comic banter going on at the same time. While in all the other Die Hard films McClane was a loner, it now feels like the Die Hard series has turned into something akin to the constantly bickering comic relationship between Mel Gibson and Danny Glover in the Lethal Weapon series, albeit spread across a generational barrier.

This was followed by A Good Day to Die Hard (2013), which took Bruce Willis to Russia.