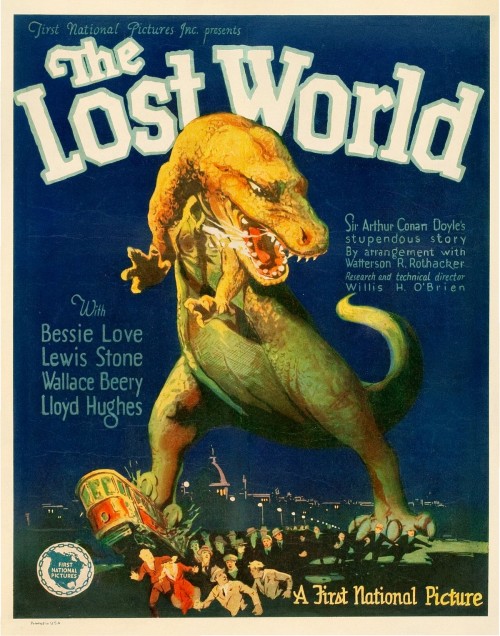 The dinosaur first roared onto the cinema screen with this silent film version of Sherlock Holmes’ creator Arthur Conan Doyle’s novel The Lost World (1912). From King Kong (1933) through The Beast from 20,000 Fathoms (1953) and Jurassic Park (1993) and numerous copies of these, the dinosaur has exuded a particular fascination on screen ever since. Special effects man Willis O’Brien, the creative force behind The Lost World, had made the earlier dinosaur shorts The Dinosaur and the Missing Link: A Prehistoric Tragedy (1915) and The Ghost of Slumber Mountain (1919), but The Lost World was the dinosaur’s first full-length feature film – indeed, it was the first usage of stop-motion animation in a full-length feature film.

It is difficult to estimate the effect the film must have had in its time. Genre history never devotes a great deal of time to The Lost World today. One suspects that the film must have been a marvel to audiences of its day for its production of something that had never been seen on the screen before. There is a story about Arthur Conan Doyle showing some of the dinosaur footage to an audience and telling them they were seeing real live dinosaurs and receiving an amazed response.

The film spends time in solid build-up. Director Harry O. Hoyt chooses his shots for dramatic dynamism and the opening builds the setting very well. However, what everyone is waiting for are the dinosaurs. The first appearance of the grazing stop-motion animated brontosaurus and the customary detail Willis O’Brien puts into it – seeing it breathe, its slow movement – is excellent. It contains the same sense of wonder that the first appearances of the dinosaurs do in Jurassic Park, albeit with greater technical sophistication on the part of the latter.

Many of the other dinosaur shots reveal a crudity today, the lack of fine detail in the models being particularly evident in closeups. Nevertheless, there are some excellently staged pieces throughout – the fight between the allosaurus and the brontosaurus on the edge of a cliff; a great widescreen shot with the brontosaurs fleeing as the volcano erupts; and the struggle of the brontosaurus trapped in the mud.

The film is surprisingly short – it is only an hour long (there are other prints in existence with running times of up to 90 minutes, although the footage from the original ruuning time of 106 minutes is considered lost). The essence of the story still manages to be packed in during that time – the film never wastes any time detailing the trip to the plateau as you would get in a modern film, and the hints that Paula’s father might still be alive are left undeveloped. Wallace Beery gives a great bullish, brooding, domineering performance as Professor Challenger – he is everything that one imagines the character of Challenger should be. The incredibly young seeming Bessie Love, who is for some reason top billed, plays with the 1920s version of angelic innocence.

The plot was rehashed in many respects in Willis O’Brien’s King Kong, which was the pinnacle of this lost world genre. Both films feature explorers venturing into a primeval lost world, encountering prehistoric beasts and returning to civilisation with one of the lost world’s greatest creatures, which then gets loose in a major city, causing chaos, before being brought down and revealing mankind’s hubris. (In the book, Professor Challenger merely returned with a pterodactyl egg that hatched and flew about the lecture theatre; the film expands this in scale allowing Challenger to return with a brontosaurus. which then gets loose in the streets of London). The major twist that Willis O’Brien placed on the prehistoric animal in King Kong was the investiture of the animal with a personality and, of course, its strange relationship with the leading lady. The difference of course turned one film into a cinematic classic while it leaves the other merely as an historic curiosity piece.