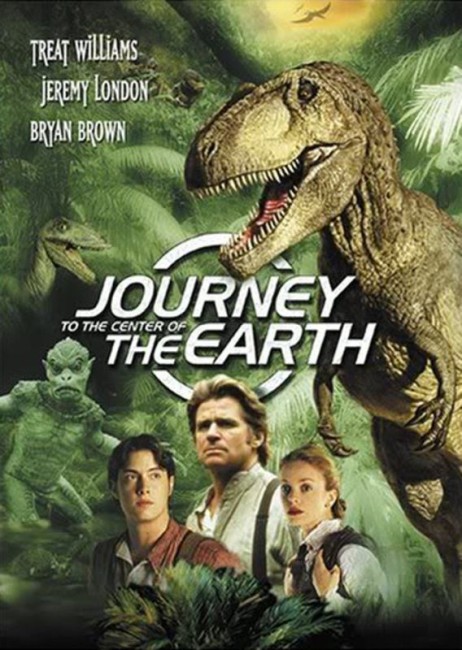 Boston, 1875. Geology and palaeontology professor Theodore Lytton is trying to find financing for an expedition to test his theories about the centre of the earth. With his nephew Jonas as assistant, he is earning money by fighting as a bare-knuckle boxer. They are approached by Alice Hastings who offers to fund Lytton’s expedition in order to find her husband Casper who has been missing for seven years. They travel to New Zealand where they venture through hostile Maori territory and into a series of caves. They travel so far down that they eventually come across an entire underground sea and a world inhabited by various species of dinosaur and prehistoric human races. Finally, they find Casper who has appointed himself teacher and benevolently rules over the human tribes. There they become caught up in conflict as the prehistoric humans try to defend themselves from attack by the evolved reptilian Sauroids.

Journey to the Center of the Earth is a tv mini-series from Hallmark Entertainment, the US-based subsidiary of the Hallmark family entertainment cable channel. Hallmark have produced a number of other genre movies and mini-series for television – see the bottom of the page for listing. The mini-series screened in two two-hour parts.

Hallmark have co-produced this version of Journey to the Center of the Earth in conjunction with Australia’s Nine Network. While the mini-series headlines American actors like Treat Williams and Jeremy London, the majority of the cast are all Australian actors, including well-known names like Bryan Brown and Hugh Keays-Byrne, best known as Toecutter in Mad Max (1979) (who has magnificent presence and steals the show as a tough-as-nails Scotsman who joins the party). To counter popular confusion, director George Miller is not the other Australian director also named George Miller of Mad Max movies and Happy Feet (2006) fame but the lesser-known Australian George Miller who made films like The Man from Snowy River (1981), Les Patterson Saves the World (1987), The Neverending Story II: The Next Chapter (1990) and Attack of the Sabretooth (2005). The mini-series is scripted by Thomas Baum who has written a number of interesting genre films including Simon (1980), the fine The Sender (1982), The Manhattan Project (1986) and Vlad the Impaler (2000).

adaptation up to that point. Baum keeps the professor and nephew as the principal explorers (although adds several others to the party, notably a romantic interest). The story generally replicates most of what Jules Verne had on the page – the gas explosions, the dinosaurs, the underground ocean, the discovery of the prehistoric humans and the explorers’ escape on a raft via a geyser at the end. It should be noted that the mini-series also makes a number of substantial additions to Verne – most notably the entire last half of the mini-series involving Bryan Brown and the prehistoric humans and their rivalry with the lizard people (Verne by contrast had the explorers only view a single prehistoric human at a distance and never interact with them), as well as everything up to the initial descent, in particular the scenes with the professor also doubling as a bare knuckle pugilist.

Whereas Jules Verne has his explorers descending into the bowels of the Earth from a volcano in Iceland, this version of Journey to Center of the Earth relocates the story in New Zealand (where the Australian film crew have hopped across the Tasman to take advantage of the real locations, perhaps the only adaptation of the Journey to the Center of the Earth to actually do so). This naturally comes with references to Captain Cook, kiwis, earthquakes and sheep jokes. Although the surprise is that Maori culture is treated with reasonable respect and an attempt made to approximate the historical era of the Maori Wars that the mini-series falls into, as well as to cast various Maori actors and allow them to speak their own language. (In fact, these scenes seem to be taking Journey to the Center of the Earth 1999 in the direction of another Jules Verne novel In Search of the Castaways/Captain Grant’s Children (1868), which had a group of explorers arriving in New Zealand and being captured by Maori tribes).

Jules Verne’s Journey to the Center of the Earth is not a story that has dated well but the surprise is that the mini-series manages to do a good job of adapting it. The production team do an impeccable job of recreating the period Victoriana, while Thomas Baum’s script has done an excellent job of researching the culture, history and especially the geology the mini-series covers. Once underground, George Miller throws in the usual cliches of collapsing rock bridges and rolling boulders. Eventually we come to some wonderfully imaginative pieces – the arrival at the vast underground ocean with rock pillars reaching all the way to a cavernous ceiling, the flight of a herd of pterodactyls across the golden skies between the pillars, the journey across the ocean by raft, encounters with dinosaurs on a beach and then with a piercingly beautiful redhead girl (Petra Yared) who abruptly scuttles up a cliff face like a lizard, the pursuit of her through a forest of blue foliage, the arrival at the underground city, and the journey down a river on a raft surrounded by banks of trees in dazzling blue and autumnal colours.

Alas, Journey to the Center of the Earth 1999‘s great crime is that despite a magnificent and wondrous build-up in Part I, the second part loses it altogether. The moment we arrive at the prehistoric city, the mini-series falls back onto the cliches of the lost world genre. Thus we get lost cities, prehistoric civilisations, nasty lizard people and the missing white man eventually discovered as the self-appointed ‘teacher’ who lives amongst the tribe as their god/ruler. The sense of wonder created during the first half gradually dissipates into tired cliches and dramas concerning tribal rivalries that are drawn out far longer than they need be, as well as Jeremy London’s romantic attraction to Petra Yared and Treat Williams’ romantic rivalries with Bryan Brown over Tushka Bergen. Even Petra Yared’s lovely enigmatic prehistoric turns out to be no more than an awkward girl who looks all of about eighteen.