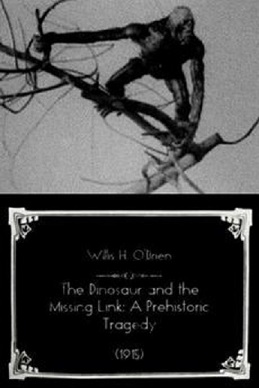 Three cavemen, The Duke, Stonejaw Steve and Theophilus Ivoryhead, come wooing Amarinta Rockface. She invites them to her cave for dinner. However, the dinner has been stolen from the pot by Wild Willie, the Missing Link. The men are forced to go hunting for food but encounter a dinosaur.

The Dinosaur and the Missing Link: A Prehistoric Tragedy was the first film from Willis O’Brien (1886-1962). O’Brien was a pioneer in the field of stop-motion animation – an almost bygone art these days in which models are adjusted by minute increments and filmed one frame at a time to give the impression of fluid movement. O’Brien had worked on the railroads and as a cowboy before becoming a sculptor. Some of his models were animated by another filmmaker and on the basis of this O’Brien was given $5000 by producer Herman Wobbler to make The Dinosaur and the Missing Link.

Subsequently, O’Brien was hired by Thomas Edison to make several other prehistoric shorts in the same vein before another producer bankrolled him to make The Ghost of Slumber Mountain (1919). From there, O’Brien went on to much more ambitious work, delivering stop-motion animated effects on the feature-length The Lost World (1925) and his magnum opus King Kong (1933). He did sporadic other stop-motion animated work over the years with The Son of Kong (1933), Mighty Joe Young (1949), The Black Scorpion (1957) and The Giant Behemoth (1958), although suffered from poor health in later years. Other films such as The Beast of Hollow Mountain (1956) and The Valley of Gwangi (1969) were based on his story ideas.

The prehistoric genre had only begun a couple of years prior to this with The Cave Man (1912) and D.W. Griffith’s Man’s Genesis (1912) and it is quite possible that The Dinosaur and the Missing Link was the very first film that pitted cavemen and dinosaurs together. The film itself is incredibly slight – prehistoric suitors visit a cavewoman a-wooing, missing link steals the dinner and so they have to hunt for more food, during which they encounter a dinosaur. The whole show only runs to six minutes long. It is more like the set-up for a film – you could imagine it as the basis for a modern prehistoric comedy like Caveman (1981), The Croods (2013) or Early Man (2018).

The film is too crude to really work. Moments of humour do slip in – Amarinta says she would invite the cavemen for tea “but that hasn’t been invented yet.” However, you feel that Charlie Chaplin or some other comic of the era would have made far more out of the basics. All of the characters, including the cavepeople, Missing Link and dinosaur are stop-motion animated, which makes the film more resemble a Claymation work. However, Willis O’Brien’s work is rudimentary at best – based on this film, you would never be able to tell that you are seeing the work of the subsequent maker of King Kong. The dinosaur itself looks like a jerky child’s toy made out of pipe cleaners and the entire battle against it is over within the space of a single shot where the camera remains placed in a wide (albeit miniature) angle and you can hardly see what is happening.