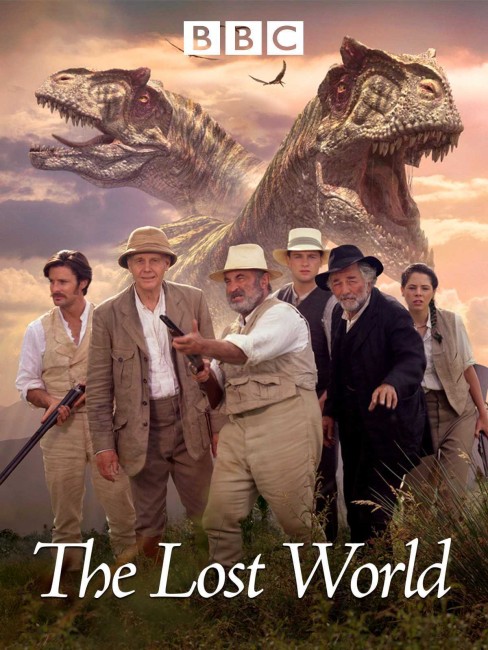 1911. Professor George Challenger interrupts a lecture by Professor Summerlee at the Natural History Museum in London to claim he has evidence that dinosaurs still exist. He creates an uproar when he produces what he claims is the bone of a pterodactyl wing. He proposes a return expedition to the Amazon to find more evidence. Summerlee agrees to join the expedition, as does the dashing explorer Lord John Roxton and Edward Malone, an ambitious young reporter for The Gazette who is looking for a good story. The group set forth down the Amazon. They are joined along the way by Agnes Cluny, who has grown up her entire life in the jungle, and her uncle, the missionary Theo Kerr who condemns the idea of dinosaurs as being of the devil. Braving superstitious natives, they make it to the plateau and indeed discover it to be filled with dinosaurs.

The Lost World (1912) was a classic novel by Arthur Conan Doyle, best known as the creator of Sherlock Holmes. Conan Doyle laid down what has become the cliche of the lost world adventure where pockets of prehistory survive to this day in a remote area – the most well known cinematic iteration of this was King Kong (1933). (For more examples of the genre see Films About Lost Worlds). The Lost World was popular and Conan Doyle wrote two further books featuring Professor Challenger. The book was first filmed as The Lost World (1925), a silent movie classic with stop-motion animated dinosaurs from King Kong creator Willis O’Brien, and it has undergone multiple film adaptations since then (see below for which).

This was a version of The Lost World produced by the BBC – a tv mini-series designed to be aired in two two-hour parts with commercials. The Lost World was made not long after Jurassic Park (1993) had been a huge success and revolutionised the portrayal of dinosaurs on screen with CGI effects. It was followed a few years later by the BBC tv documentary series Walking With Dinosaurs (1999), which used CGI effects to offer a highly realistic depiction of the prehistoric world of dinosaurs. The Lost World has been intended as some kind of follow-up to Walking With Dinosaurs, also being made by the BBC and employing the same effects company Framestore.

The mini-series holds good faith to the Arthur Conan Doyle book for the most part, retaining aspects that other versions drop like Edward’s beloved Gladys. There’s the odd change – the addition of a romantic plot with the new character of Agnes played by Elaine Cassidy; while the treacherous porter who was a former slave in the book is replaced by the character of Peter Falk’s missionary; and Roxton is killed (although at the very end it appears this is not the case after all). The mini-series also reaches a downbeat ending where the pterodactyl escapes from the lecture hall as per the book but Challenger and the party all agree to a cover-up of the truth of what happened to prevent exploitation.

The Lost World is an enjoyable work for the most part. It is given the full period treatment. The characters are a likeable bunch with Bob Hoskins making a suitably gruff Challenger and Tom Ward a dashing Roxton. The early sections are padded with standard adventure elements – encounters with water snakes, the venture across a log bridge as someone cuts through the other end, the stopover to introduce missionary Peter Falk and niece Elaine Cassidy and the hint of romance with her.

When the show arrives at the plateau, the dinosaur effects are very good. Even watching the show nearly twenty years on from when it was originally made, these hold up well and haven’t dated as many other visual effects from the era have. The main issue one would make is that once we do get to the plateau there is not too much more to the show dramatically beyond the dinosaur scenes. These are interspersed with the encounter with the natives and ape-men but never amount to anything particularly exciting.

Stuart Orme is a British television director who has also made the fine dark children’s fantasy film The Wolves of Willoughby Chase (1989) (1989) for cinematic release and then went onto the alien body snatchers film The Puppet Masters (1994). Almost all of Orme’s other work has been in British television. His other genre works have included:- the award-winning tv mini-series The Sculptress (1996) from the Minette Walters thriller; the mini-series The Last Train (1999) about a trainful of passengers who are cryogenically frozen; the children’s story adaptation Fungus the Bogeyman (2004); and the serial killer thriller Cold Blood (2005-6) and its sequel Cold Blood: The Last Hurrah (2007); and the haunted submarine tv movie Ghostboat (2006).