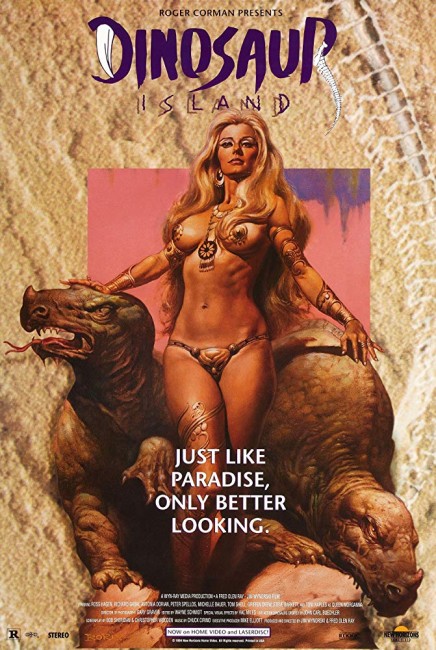 Captain Jason Briggs is supervising a flight aboard which three soldiers accused of desertion are being taking to be tried. The plane then goes down over the ocean and six of them wash ashore on an uncharted island. They soon discover that dinosaurs roam free on the island. They then encounter an all-girl tribe who take the men prisoner. When the smiley face tattoo on Skeemer’s arm is discovered, the girls believe that it is a sign that the men have been sent to destroy the Great One – the toughest of the dinosaurs on the island to whom girls have to be regularly sacrificed. In between showing the girls the old-fashioned loving they have never known, the men set out to defeat the Great One.

Fred Olen Ray and Jim Wynorski were the two most prolific directors of B-movies during the 1980s and 90s. (See below for either’s credits). Their careers began fairly much around the same time in the early 80s; they have covered very similar territory and made numerous films in the science-fiction, horror and action genres; and both overrun their films with copious amounts of softcore nudity and a love/parody of B genre movies. The two were the most prominent directors associated with the Scream Queen fad of the late 1980s. The two appear to be friends in real life and often produce and make cameo appearances in the other’s films. They had previously co-directed Scream Queen Hot Tub Party (1991) and Dinosaur Island has been their second and final co-directorial outing to date.

It is important to place Dinosaur Island in context. It came out twelve months after Jurassic Park (1993) went massive and at a time when people could rake in bucketfuls of money by slapping the words ‘dinosaur’ or ‘jurassic’ on anything. Olen Ray and Wynorski were two filmmakers who quickly rushed to milk the fatted cow and have simply churned out another of their typically cheap B movies (the film is produced Roger Corman’s New Horizons production company).

In essence, they have just put ‘dinosaur’ on the title and otherwise filled the show with their usual parade of well endowed and minimally talented actresses. The two have done little more than given us a standard plot about wayfarers encountering a prehistoric lost world and run it over with softcore love scenes. At almost timed intervals throughout, the lead actresses shed their clothes for topless romps with one or other of the men. Occasionally we get a dinosaur scene but these feature some of the most pitiful dinosaur effects of any film made during this decade.

One of the worst aspects is the way Olen Ray and Wynorski run everything over with lame comedy relief. This principally comes from the direction of Richard Gabai, a director in his own right with several softcore films including Virtual Girl (1998), who spends the entire film tossing off wisecracks and one-liners. A dinosaur rumbles into view while he is making out with Antonia Doran: “It’s the Great One,” she exclaims to which he replies “I haven’t even taken it out yet.” Or the sheer inanity of the scene where she is trying to warn him about a creature approaching from behind him in a cave while he takes this as a game of Charades.