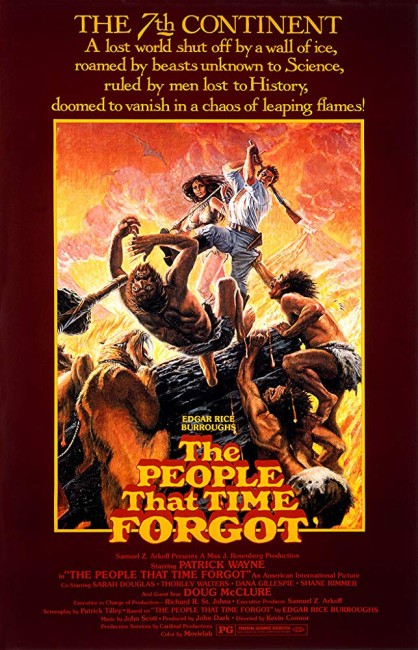 The log of Bowen Tyler’s discovery of the continent of Caprona, a land that still exists in the Cretaceous, has been found. An expedition to rescue Tyler has been mounted aboard the Polar Queen by Tyler’s old friend Ben MacBride. The rescue team fly over the wall of Antarctic ice and into the humid interior of the continent in a biplane. After crash-landing, they must brave dinosaurs, hostile tribes and an exploding volcano in order to rescue Tyler.

England’s Amicus Productions had a reasonable success with the prehistoric lost world film The Land That Time Forgot (1974), directed by Kevin Connor, produced by John Dark, starring Doug McClure and adapted from the novel by Tarzan creator Edgar Rice Burroughs. With that success in mind, Amicus and all the abovementioned went onto adapt a further Edgar Rice Burroughs novel with At the Earth’s Core (1976). Amicus, a modest company that had success with a number of horror films during the 1960s and early 70s, particularly their horror anthologies, folded shop shortly after that. However, Connor, Dark and McClure regrouped at the English division of American International Pictures (AIP) to make The People That Time Forgot. They would all subsequently go onto make Warlords of Atlantis (1978) for EMI/British Lion, which was not adapted from Edgar Rice Burroughs, but could well have been in that it assembled the same lost world and prehistoric monster elements that were a central element of the other three films.

The Land That Time Forgot (1918) was the first in a trilogy of books by Edgar Rice Burroughs set on the prehistoric continent of Caprona and so for the sequel Dark, Connor et al turned to the second of the books in the trilogy, The People That Time Forgot (1918). (The third and final book in Edgar Rice Burroughs’ Caprona series, Out of Time’s Abyss (1918), remains unfilmed). This time Dark and Connor did not retain the services of celebrated sf/fantasy Michael Moorcock who had adapted The Land That Time Forgot and turned to Patrick Tilley, a minor British science-fiction writer best known for the post-holocaust Amtrak Wars series. Tilley follows Edgar Rice Burroughs’ book reasonably well, although substantially reduces the number of primitive tribes and much of the running around on Caprona.

The majority of John Dark and Kevin Connor’s lost world films are better than many genre viewers are often prepared to give them. The main problem that Dark and Connor had was that the imagination on display was often in excess of what the special effects department could deliver. The People That Time Forgot notedly opens with a wonderfully imaginative sequence where the explorers fly up over the wall of Antarctic ice in a biplane, only to face a pterodactyl that starts trying to chew up the wings and they have to shoot it down with a Vickers machine-gun. The sequence teeters between soaring with a genuine imagination and failing through seeing a pterodactyl that only has clunky hinged-jaw movements.

The same problem extends throughout the film – the stegosaurus that the explorers encounter is painfully clearly only an immobile model with legs that make mechanical back and forth movements as it is winched along behind some rocks. I could not help but break into unintentional titters during the sequence where the party try to traverse a cave passage as snake heads keep popping out, which kept reminding me of the old Frogger arcade game.

The filmmakers went to shoot in Santa Cruz de la Palma in Spain, which makes for a convincingly primordial and untouched prehistoric landscape. The show moves along colourfully – one particularly liked the journey to a city on a mountainside that has been constructed as a giant skull. However, the adventures concerning dinosaurs, giant snakes, being captured and nearly sacrificed in a volcano by tribes are routine. Everything goes up in the predictable exploding volcano cliche climax where the special effects team set off what would surely have to be a record number of explosions in a film.

The film has an interesting cast. The lead actor is Patrick Wayne, the son of John Wayne. Patrick Wayne had a minor career as an actor, which hit a peak in 1977 when he appeared as a leading man in both The People That Time Forgot and Sinbad and the Eye of the Tiger (1977). Patrick has the handsome certainty of a classic matinee idol – the great mystery is why he almost entirely vanished off the radar after 1977.

Sarah Douglas appears in one of her first performances before she found fame as a super-villainness in Superman (1978) and particularly Superman II (1980) and then went onto uber-bitch roles in Falcon Crest (1981-90) and a good number of B movies. Here she walks through the film, radiating a good deal of confident, sexy, upper-class breeding. There is also the bewitchingly lovely Dana Gillespie, who makes a jaw-dropping appearance as a primitive girl, even if the film promptly provides her with nothing else to do throughout other than show off her undeniably impressive cleavage.