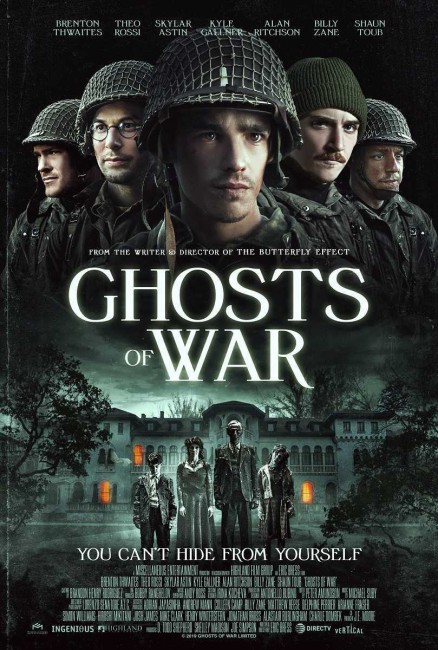 Nazi-occupied France, 1944. A unit of five American G.I.’s are posted at a chateau. As they arrive, the previous unit stationed there seem eager to leave. As the men settle in, it gradually becomes apparent to them that the chateau might be haunted. A troupe of German soldiers arrive and a shootout ensues with the G.I.’s. During the midst of this, ghosts appear and kill the Germans. The G.I.’s realise that these are the ghosts of the family that lived at the chateau who were killed by the Germans. As they stay on, deeper secrets become apparent.

Ghosts of War was the first solo directorial film from Eric Bress. Bress had previously worked in collaboration with J. Mackye Gruber. The two had written the screenplay for Final Destination 2 (2003) and then made their writing/directing debut with the time travel film The Butterfly Effect (2004). They subsequently created the tv series Kyle XY (2006-8) but appeared to part ways after that. Bress went on to write The Final Destination (2009) and Gruber has announced solo projects.

Ghosts of War is one of several films that derive from The Keep (1983). The Keep had a highly original premise of Nazis facing an ancient evil in a Romanian fort during World War II. Since then, there have several films that have conducted variations on the basics of The Keep with the likes of The Bunker (2001), Deathwatch (2002) and The Devil’s Rock (2011) – all with plots about World War II era soldiers encountering supernatural/occult elements in forbidding locales. Ghosts of War gives us a seemingly haunted French villa and peoples the story with G.I.’s and briefly a troupe of Germans but is in essence the same set-up.

The film starts out seeming as though it is a ghost story, Here all of Eric Bress’s tricks and jumps come by the standard playbook and emerge with an utterly generic lack of affect. There was not a single one of these spooky moments that remained in memory as I write this up a day after watching the film. About the only thing that did was the character of Kyle Gallner who appears to have some major psychopathic issues underneath the surface that start to come out in interesting ways – although the film seems to be setting these up to explode but that never happens.

Ever since M. Night Shyamalan and The Sixth Sense (1999), fantastic cinema seems infected with the need to produce a Conceptual Reversal Twist that offers a last minute reveal that everything we assumed was going on is not the case. We’ve had some ridiculously hokey twists offered up before – see the abovelisted theme link. There’s a ridiculous one here where [PLOT SPOILERS] the film pulls back at the end and suddenly reveals that the entire chateau and World War II era setting is all a Virtual Reality simulation for present-day soldiers that have been wounded in Middle Eastern combat. It is a twist that has largely been borrowed from Open Your Eyes (1997), which was remade as the Tom Cruise film Vanilla Sky (2001).

It is a twist that makes little sense when you sit and think about it. Wouldn’t contemporary soldiers be massively confused to find themselves in a World War II environment? A whole bunch of things they are familiar with, including modern combat training methods, would have vanished. They seem very familiar with the vehicles, weapons, character backgrounds, milieu they are in – where does all that comes from? Not to mention that adding a bunch of ghosts into the simulation hardly seems something designed to help soldiers recuperate.

The G.I.’s also make reference to films – Abbott and Costello Meet the Mummy (1955) and I Was a Teenage Frankenstein (1957) – that left me puzzled. They are films made a decade after the 1944 setting – either Bress has not done the five minutes research it would take to confirm these or else he is signalling in a subtle way that only film nerds like me would get that the setting is anachronistic.