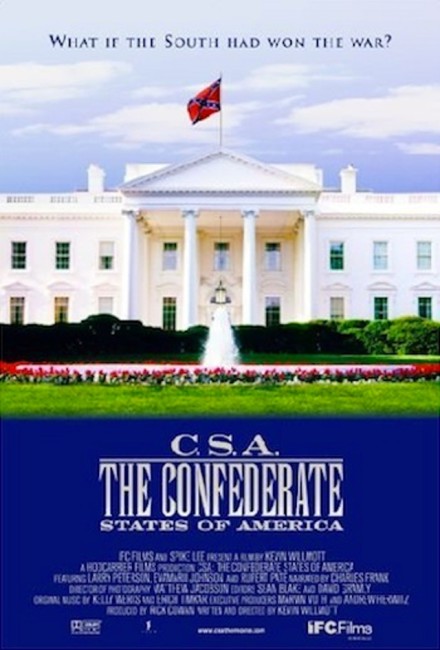 ‘C.S.A.: The Confederate States of America’, a documentary made by the British Broadcasting Service, screens on a San Francisco television station, recounting the history of slavery in the CSA. Following President Abraham Lincoln’s Emancipation Proclamation in 1861 and the revolt by the Southern slave-owning states, the North was defeated at the Battle of Gettysburg thanks to foreign allies. President Lincoln was arrested and forced into exile. Afterwards, the two sides were united by new President Jefferson Davis who created a tax cut for those who owned slaves, which the people of the North readily adopted. Slavery became entrenched as the CSA expanded its empire into the conquest of Central and South America. During World War II, Adolf Hitler was a welcomed in the CSA, although the CSA differed over his proposal of the Final Solution, preferring to keep slaves rather than exterminating entire races. In the 1950s, the Cotton Curtain developed between the CSA and Canada after they opted for the abolition of slavery. A war of tension grew between the two countries as the Abolition movement sought inroads into the CSA. President John F. Kennedy sought a move towards Abolition but was assassinated.

Though it has flourished and become its own distinct sub-genre in the printed medium, the alternate history has only enjoyed sporadic success on cinema and tv screens. We have seen occasional filmed efforts such as It Happened Here (1965), Quest for Love (1971), Fatherland (1994), White Man’s Burden (1995), Sliders (tv series, 1995-2000), The Man in the High Castle (tv series, 2015-9), SS-GB (2017), For All Mankind (tv series, 2019- ), Yesterday (2019), The Plot Against America (2020) and Noughts + Crosses (tv series, 2020- ). C.S.A.: The Confederate States of America ventures into one particular sub-theme among alternate histories that has been of great fascination to American writers – the idea of a world where the South won the Civil War – see works like Ward Moore’s Bring the Jubilee (1952), various Harry Turtledove books, even Newt Gingrich’s Gettysburg: A Novel of the Civil War (2003).

C.S.A.: The Confederate States of America is made by Kevin Willmott, an African-American who has been active in civil rights issues and holds a professorship in Film Studies at Kansas University. Willmott made his directorial debut with Ninth Street (1999), a film about a Kansas street block over the decades, and went onto reasonable acclaim with C.S.A.: The Confederate States of America. Willmott subsequently made Bunker Hill (2008), a fantastical film set in a town suffering from an inexplicable power failure, The Only Good Indian (2009) about the forced assimilation of Indians into Western society during the 19th Century, Jayhawkers (2014) and The Association (2015). Willmott made a return to genre material with Destination Planet Negro (2013) where a spaceship full of African-Americans from the 1930s goes through a time warp to end in present-day America.

As with all of these other abovementioned South Wins works, Kevin Willmott sees the point that his world diverges from our history (known in genre terminology as the Jonbar Hinge) as being when the South instead of the North won the Battle of Gettysburg. The crucial difference is seen as being that the South was aided by several European nations, allowing the states that favoured the ownership of slaves to overturn Abraham Lincoln’s Proclamation Declaration.

C.S.A.: The Confederate States of America comes with all the casually littered inversions of the everyday that are familiar to alternate history fiction – the film opens on a montage of potent images of the Confederate flag flying over the White House, being planted at Iwo Jima and in the background during the Moon Landing. There is a considerable cleverness to some of the twists on the familiar – how the woman’s suffrage movement is now spun as wives complaining about their husbands siring mixed race babies; how Elvis Presley was forced to flee to Canada because of his adoption of banned Black-influenced music. There are some beautiful throwaway touches – like the popular Presidential candidate (who is wont to come out with unnerving lines such as “our dear family friend, Chancellor Hitler”) whose career is derailed by accusations that he is a half-breed, resulting in the line “My grandaddy did not have sexual relations with that woman.”

Some of the writing as we trace the course of the alternate history is devastating. Kevin Willmott is politically astute and more than willing to dig beneath the feelgood romanticism that tars much populist US history. He very much ties the thinking that drove the South to a Christian self-righteousness – the desire to make the country an all-Christian nation, resulting in the expulsion of other races and banishing of Jews to a reservation. There are some incredibly nasty scenes like where a Black African leader stands up before a conference to argue in favour of the reasons for selling his own people into slavery, although “only those that are his enemies”.

Some of the most devastating scenes come around the period of World War II where Adolf Hitler (a not very convincing look-alike) visits the US to roaring success, even if the CSA does not give tacit approval to his Final Solution because they consider the elimination of other races a waste of slaves. Most alternate history films throw in a couple of such background details that overturn the familiar but the brilliance of what Kevin Willmott has done is that he has imagined an entire alternate history for the US that stretches from the mid-19th Century through to the end of the 20th – the film’s website elaborates even further details that do not appear in the film.

Some of the film’s most devastating bite comes in the media clips we see from the alternate history. There is a mock-up of a silent film called The Capture of Dishonest Abe (directed by pioneering silent filmmaker D.W. Griffith whose famous The Birth of a Nation (1916) featured the Ku Klux Klan as heroes) where we see Abraham Lincoln trying to escape disguised as a slave and the scene is played out in black-face slapstick comedy and caricatures of the era with Abe’s dialogue consisting of him trying to affect Ebonics.

Willmott saves the most biting satire for the commercials – the film poses as a documentary about the history of the Confederate States that is airing on a tv channel and thus frequently stops for commercial breaks. There is an ad for a motor oil that is an amusing dig at tv’s Southern-themed The Dukes of Hazzard (1979-85) featuring the General Lee, which points at the inherent racist attitudes in the show; an infomercial for Better Homes and Plantations about good etiquette on slave handling that is hosted by an unnerving Martha Stewart look-alike; commercials for Niggerhair cigarettes featuring a Marlboro Man look-alike, among others.

There is even a university recruitment ad appealing to those who have dropped out to find careers as an overseer, a slave monitor, a paddyroller, a breeder and something called e-slave accounting. There is a parody of the tv show Cops (1989– ) called Runaways involving the round-up of runaway slaves, which even comes with a gospel rendition of the Cops theme song Whatcha Gonna Do? I also loved the throwaway touch about a certain well-known credit card referred to as MassaCard.

The most devastating thing to learn over the end credits is that many of the ads that one took to being made up by the film are based on products that actually existed – Niggerhair Tobacco and Darkie Toothpaste were real brand names and there was a real fried chicken outlet called Coon Chicken Inn. The disturbing thing about these is realizing how in the real world many of the products continued on past the point that such portrayals became unacceptable with the manufacturers simply watering down or replacing the terminology but retaining the basic concept. As the end credits devastatingly note: “Today the use of slave imagery in the promotion of products often goes unnoticed. Just ask Aunt Jemima and Uncle Ben.” Even physician Samuel Cartwright and his identification of Drapetomania (a medical condition that is said to cause discontent and the desire to flee in slaves) was something taken from the history books rather than made up by the film.

C.S.A.: The Confederate States of America is a science-fiction film where the scenario has been worked out with superb detail, something that rapidly propels it to become the best of the sporadic screen ventures into alternate history. The only flaws one can point to are in some of the film recreations. There is an interview with an aging Abraham Lincoln in 1905; however, the synchronization of film and audio did not exist until the 1920s, apart from a few unsuccessful attempts to invent such a system. Other film recreations such as the 1940s film called The Jackson Brown Story is clearly not the Technicolor it is trying to be but merely something shot on video.

One set-up that works very well is the 1950s scenes recreations where we have the fear of Abolitionists delivered in terms of the same fear of Communism and ideological infiltration that we saw in starkly fearful terms in films such as I Was a Communist (1949), which is equally cleverly made to tie into this the sense of depersonalisation and lack of emotions that plays out in genre films of the era such as Invasion of the Body Snatchers (1956).