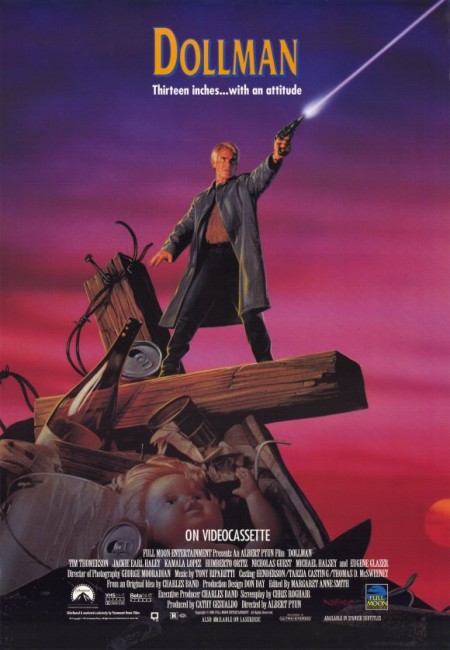 On the planet Arturos, 10,000 light years from Earth, Brick Bardo, an ultra-tough, rule-bending cop, comes up against his frequent adversary Sprug, a crime kingpin whose body parts have been successively blown away by Bardo until he now exists only as a head attached to an anti-gravity disc. Sprug escapes in a spaceship, hotly pursued by Bardo. They crash on Earth in the South Bronx where both are now a sixth of their normal size. Bardo falls in with Debi, a human woman who leads a neighbourhood crusade against gangs, while Sprug forges an alliance with a local drug dealer.

Dollman is a low-budget production from Albert and Charles Band’s Full Moon Productions. Dollman is an unassuming and likable production, although it has been called one of the Bands’ worst films. It is also a considerably better film than usual film for Albert Pyun, director of a number of low-budget sf/action films. (See below for Albert Pyun’s other films).

There is an hilariously blackly funny opening with psycho Frank Doubleday holed up in a laundromat (apparently on Arturos they spell laundromat as ‘laundrymat’) with a group of fat ladies as hostage. Tim Thomerson turns up, dressed in traditional dark glasses, trench coat and tight-lipped expression. “What are you going to do?” asks his captain. “I’m going to use hot water for my whites and cold wash and a warm rinse for my colours,” Thomerson replies, whereupon he enters the ‘laundrymat’ and nonchalantly proceeds to do his washing in full view of Doubleday. When Doubleday starts getting antsy, Thomerson threatens to blow him away right through one of his fat hostages, something that causes the fat lady to have a heart-attack and collapse on top of Doubleday. It is an hilariously bad taste sequence that sets the tone of the film perfectly.

The rest of the scenes on Arturos keep a similar tone – there is some amusing gunplay with Tim Thomerson wielding a weapon that entirely splatters his targets and the equally preposterous image of one victim blown away until he is nothing but a torso, smoking his last cigarette. Tim Thomerson carries the part off with panache – he perfected this type of role in the Bands’ Trancers series. (Indeed, the Bands managed to turn Tim Thomerson into a cult figure through these roles).

The scenes on Earth take a very different tone. Here Albert Pyun opts for a strong and often angry sense of social realism. The opening montage cruising the Bronx and casually observing liquor store holdups is highly effective. Best of all is Kamala Lopez who portrays her part with a convincing sense of moral purpose – a scene where she tells Tim Thomerson about how her husband was killed by gangs is heartfelt. However, the tone of these sequences jars with the tone of black comedy and comic-bookish ultra-violence in the initial scenes on Arturos. As a result, Dollman never satisfactorily finds a vein to settle into during these scenes.

The film is further weakened by mediocre special effects. Despite the central selling point of its pint-sized hero, the very area that lets the film down is an unconvincing portrayal of its miniaturisation effects – Tim Thomerson is almost never seen in contrast against any normal-size people. There is one amusing gag where Kamala Lopez cuts off discussion about whether Tim Thomerson should stay out in the open by simply picking up his spaceship and carrying it home. There is an equally amusing scene where gang leader Jackie Earl Haley hears Sprug’s plans for the bomb then simply squashes him under his fist like a bug.

For all that, the Dollman’s adventures in The Bronx never amount to much – we are only getting into their flow when the film’s slight running time is over. Perhaps it is that the Bands’ intended to make a Dollman series like they did with their Trancers and Puppetmaster films – although this is something that never eventuated, apart from Dollman Vs the Demonic Toys (1993), which brought back Tim Thomerson and paired him up with several other creations from Full Moon films.