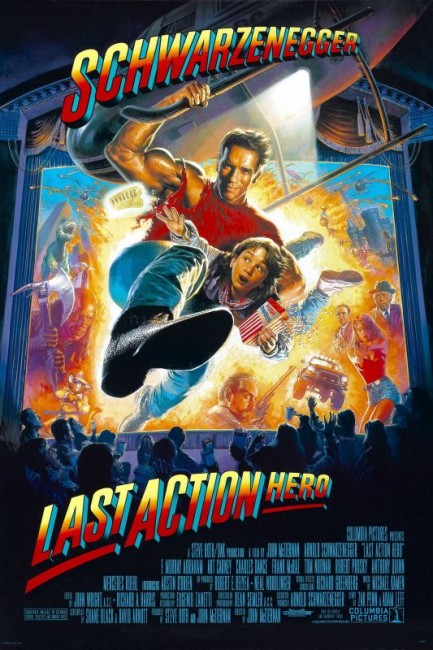 Young Danny Madigan spends all his time watching action movies in a rundown theatre. His aging projectionist friend Nick invites Danny to a special preview screening of Arnold Schwarzenegger’s new action movie ‘Jack Slater IV’ and gives him a special ticket that he claims has magical powers. During the screening, the ticket suddenly comes to life and propels Danny through the screen and into the movie. There Danny finds himself in the unreal world of the action film alongside Jack Slater. As Danny struggles to convince Slater that this is a movie that doesn’t resemble real life, Slater’s nemesis Benedict manages to get hold of the ticket and escapes through into the real world. There he marvels at how different things are to the world of action movies – how nobody seems to care about stopping criminals. Danny then realises that Benedict is planning to kill the real Arnold Schwarzenegger at the movie’s premiere. He and Slater must return to the real world and race to stop Benedict.

Last Action Hero was subject to so much negative publicity – mostly concerning whether it would recoup back its then sizeable $85 million budget – that it was dead on its feet even before it had been released. Following its release, it weathered a storm of universally negative reactions from critics and audiences alike who for once seemed in unison in condemning it as confused and difficult to follow. In subsequent interviews, director John McTiernan even joined the voices of condemnation. Which is all a shame as Last Action Hero is a rarely intelligent film. It certainly isn’t confusing and those who condemned it as overblown seem to be have an inability to see that it was parodying the excesses of an already overblown genre.

Last Action Hero‘s central concept – that film is literally an alternate dimension – is presented with considerable ingenuity. Here action movie cliches are wittily sent up – the kid realising that his life is in danger when he discovers he is meant to be the comedy sidekick; Arnold Schwarzenegger’s Jack Slater being able to brush himself off and come out clean in a few seconds after a fall into a tar pit; his complaints about the number of closet doors he has to keep replacing as a result of all the people who hide in ambush. A car chase at the beginning is a car chase parody to end all overblown car chases with cars surviving jumps from bridges, landing on the roofs of other cars and people being killed by cones flung out by exploding ice-cream vans.

Last Action Hero gains another level of sophisticated satire when it emerges into the ‘real world’. Here it allows star Arnold Schwarzenegger to indulge in an enormous amount of self-parody – at the film premiere, he excitedly tells the press about how this is a much more responsible film because they only killed 48 instead of 148 people, while real-life wife Maria Shriver rolls her eyes when he starts using the photo opportunity to promote another Planet Hollywood restaurant. Schwarzenegger has so regularly subjected himself to self-deflation on screen that it is hard to imagine any other popular action star being able to carry off such a parody of one’s image as he does here.

The film allows other stars a surprisingly gamesome amount of playing around and parody of other films too – F. Murray Abraham is identified as “the guy who killed Mozart” after his famous role as Salieri in Amadeus (1984); while Sharon Stone, straight out of Basic Instinct (1992), an animated cat police officer and even the black-and-white ghost of Humphrey Bogart make appearances at the police station. James Belushi makes an extremely funny appearance at the film premiere, commenting to the press “actually I don’t really like his films – I’m just waiting for him to fall from the No.1 spot so that I can take over.” Although the funniest dig is at Mel Gibson and his stab at ‘serious acting’ in Franco Zefferelli’s Hamlet (1990) in a daydream sequence that conducts an action-movie interpretation of Hamlet.

Last Action Hero has a serious side too, where, albeit under the guise of satire, it casts a rare human side to being a larger-than-life action hero – having Slater complain how more complicated his life has become since they started making sequels, his discovery of the joys of simply being able to talk to a woman or of listening to classical music instead of rock on the soundtrack. At one point, the script has a remarkable soliloquy where the action hero stands up to his real-life counterpart (ie. the real world Arnold Schwarzenegger) to say “I don’t like you – you’ve made life difficult for me” and list the pain he went through of losing his son for the sake of drama.

When the film returns to the ‘real world’, it makes some troubling contrasts between the world of the action film and real life – cars not blowing up when they are shot at or crash into one another; Schwarzenegger finding that he feels pain when he punches through car windows; Charles Dance’s villain marvelling at seeing people being killed simply for their shoes and that police cars don’t instantaneously arrive on the spot when he shoots someone.

In dispelling the myths created by the action movie and (it seems) in trying to examine their overblown mindless spectacle, Last Action Hero is almost an action film that reaches a point of moral responsibility. The climax perhaps does trade on exactly the sort of screen dramatics that the film is meant to be parodying and does tread a very narrow dividing line between having its cake and blowing it up too, but that hardly gets in the way, and for its two-hour plus running time one has what is both one of the most sophisticated self-parodies and most intelligently self-examining action films Hollywood has ever created.

Director John McTiernan has made a number of other genre films, all of which are generally worthwhile:– the excellent urban ghost story Nomads (1986), Predator (1987) with Arnold Schwarzenegger facing an alien huntsman, the Tom Clancy techno-thriller The Hunt for Red October (1990), the dull Green-conscious medical drama Medicine Man (1992), the Michael Crichton adaptation The 13th Warrior (1999) and the remake of Rollerball (2002).