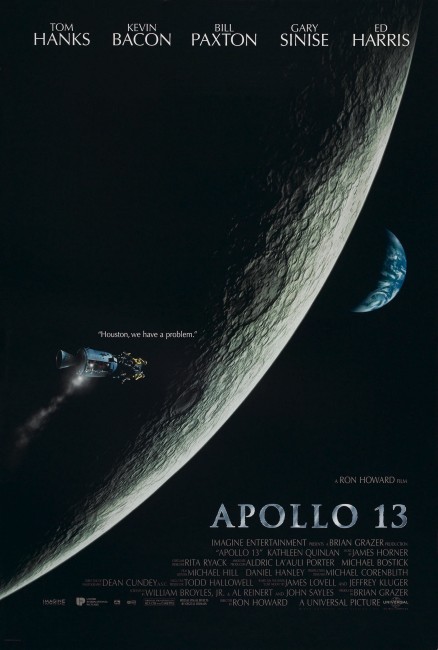 The true story of the disaster of the planned Apollo 13 Moon landing in 1970. Soon after the Apollo’s launch, an explosion occurred in the mixing tanks. The only solution for the mission controllers was to abandon any attempt at landing on The Moon and concentrate on trying to bring the three astronauts back safely. However, the explosion had damaged power systems, meaning that the capsule had to be brought in on minimum power. This meant that with no heat the astronauts had to endure freezing conditions in the capsule. Without any air recycling systems, the CO2 in the cabin was mounting to toxic levels, not to mention the fact that the explosion had damaged several heat shields making successful reentry an uncertain option. Through it all both the ingenuity of the technical staff and the heroism of those aboard kept finding solutions.

Apollo 13 is based on the real-life failed 1970 Moon landing. Apollo 13 was a big critical and public hit when it came out, even being nominated for Best Picture at that year’s Academy Awards and Golden Globes, and Tom Hanks being nominated for the Best Actor Academy Award. The film has been made with painstaking effort at authenticity. For example, rather than the usual astronauts flying about on wires used to represent zero gravity in science-fiction, the filmmakers shot in NASA’s so-called ‘Vomit Comet’, a jet plane whose high-speed, high-altitude dives allow conditions simulating zero g for 30 seconds at a time.

Apollo 13 makes for an interesting comparison to Philip Kaufman’s film of Tom Wolfe’s The Right Stuff (1983), which was also a factual account of the US space program. The Right Stuff saw the American space program in terms of testosteronally-hyped cowboy antics and motivated most of all by a desire to achieve political one-upmanship over the Russians. No such self-questioning assails Apollo 13 however. Apollo 13 comes with a four-square solidity where the astronauts are good All-American boys and the space program is serving the noblest of human and patriotic endeavours. The exercise is conducted with considerable solemnity – the camera angles focus on the faces of the film’s ordinary heroes as they nobly contemplate the vastness of their endeavour and reverentially pans past the American flag and so on. Although, as fitting with this era of post-Vietnam War, post-Watergate social disillusionment, Apollo 13 is ironically a film not about the victory of the space mission but rather about asserting the triumphant heroism of the mission that failed.

One gets the impression Ron Howard is very much the same person as Richie Cunningham in real life, a simple and uncomplicated middle-class American boy who likes Mom and apple pie. All of Howard’s films have a honest cleanshaven simplicity to them and seem filled with the greatest reverence and respect for traditional values. In in all of this do consider – if a film about say a US military operation were conducted with such flag-waving and heroic reverence as Apollo 13 is, would it not be considered one of the most shameless pieces of patriotic propagandism?

Apollo 13 is not a bad film by any measure – indeed, it is probably best film in Ron Howard’s otherwise rather stodgy and prosaic oeuvre. Howard is very effective at bringing out the simple human strengths of the characters. The drama once it gets up into orbit is gripping. The effects visualisation of the capsule in orbit creates a genuine feeling for the vastness and emptiness of space, unlike most spaceborne science-fiction films. All give capable performances, although these are somewhat mitigated by the relative blankness of the characters. Tom Hanks’s Academy nomination, considering the lack of challenge his fairly nondescript role requires, was most certainly overrated and unnecessary. The one who triumphs the best is the always reliable Ed Harris.

Ron Howard’s Imagine Entertainment, with Tom Hanks as producer, returned to make the excellent cable mini-series From the Earth to the Moon (1997), which expanded out and told the stories of the other Apollo Moon landings.

Ron Howard’s other genre films are:– the mermaid comedy Splash! (1984); Cocoon (1985) about a meeting between geriatrics and extra-terrestrials; the George Lucas sword-and-sorcery collaboration Willow (1988); the Dr Seuss adaptation How the Grinch Stole Christmas (2000); the supernatural Western The Missing (2003); The Da Vinci Code (2006) based on the historical/religious conspiracy bestseller and its sequels Angels & Demons (2009) and Inferno (2016); and Solo: A Star Wars Story (2018).

(Nominee for Best Adapted Screenplay and Best Special Effects at this site’s Best of 1995 Awards).