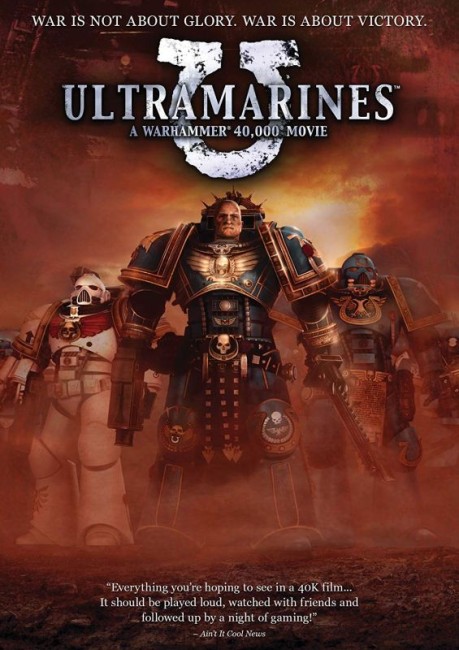 It is the 41st Millennium. The Ultramarines are an elite division of the Space Marines. They fight in the service of the emperor against the forces of Chaos, demons and mutations that have emerged through rifts on the edge of the galaxy. A division of new Ultramarine recruits from Ultima squad are despatched to the planet Mithion, the site of a shrine, after another division of Marines, the Imperial Fists, have activated an emergency beacon and are no longer responding. On the planet’s surface, the Ultramarines encounter demons and Chaos Marines, before encountering the two sole survivors from the Imperial Fists. Travelling back to Ultramarine base at MacRagge, they begin to suspect that the survivors may have become tainted by Chaos.

Ultramarines – known everywhere as its dvd-cover title Ultramarines: A Warhammer 40,000 Movie, also in some places as Ultramarines: The Movie, but just as Ultramarines on both its opening and end credits – is an animated film based on the table-top game Warhammer 40,000. Created by Games Workshop in 1987, Warhammer 40,000 is a science-fiction wargame that is played with miniature soldiers and monsters, each being equipped with various weapons, powers and abilities. There is an elaborate series of rule books governing play and character powers, which has developed out into a complex back mythology set in a futuristic empire that operates along Mediaeval lines where gods and demons sit alongside spaceships and genetically enhanced soldiers. The game has proven so popular that Games Workshop has spun off a comic-book, eighteen videogames and created its own publishing subsidiary Black Library, which has produced more than 200 novels set in the Warhammer 40,000 universe, including four of these from noted British science-fiction author Ian Watson, best known here as the original screenwriter for A.I. (Artificial Intelligence) (2001).

While live-action films based on videogames have become big box-office – see the likes of Mortal Kombat (1995), Lara Croft, Tomb Raider (2001), Resident Evil (2002), Doom (2005) et al – there have been a smaller number of animated ones that are released direct to dvd – see the likes of Final Fantasy VII: Advent Children (2005), Resident Evil: Degeneration (2008), Halo Legends (2010), Mass Effect: Paragon Lost (2012), Resident Evil: Damnation (2012), the Dead Space films. These are usually pitched much more to hardcore gamers and are far more conversant in and steeped with the minutiae of game canon than the live-action films. Ultramarines falls into the same company as these.

The script for the film comes from Dan Abnett, a British writer on numerous DC, Marvel and 2000 AD titles, who has also written some 25 of the Warhammer 40,000 novels. Ultramarines is a directorial debut for British animator Martyn Pick who had previously conducted the animated segments for The Age of Stupid (2009), the promotional film for the London 2012 Olympics campaign and the live-action horror film Evil Never Dies (2014).

The animation in Ultramarines is very reminiscent of Final Fantasy: The Spirits Within (2001), the so far only theatrically released animated film based on a videogame. Both films come in a far more realistic style than the average cartoon and with the same gritty texturing to the characters– faces – they are clearly animated films intended for adult rather than juvenile audiences. There are some reasonable action scenes in Ultramarines, particularly when the film gets the marines into battle. In the end though, the animation on Ultramarines is B-budget and it never takes the animation to the heights that you feel it could have done. The film also does not do enough to give each of the almost identically outfitted soldiers any distinction – it is frequently difficult to tell one apart from another. That said, when it comes to the voicing roles, Terence Stamp is magnificently cast and does the aging, battle weary senior soldier routine to perfection.

As with the game and the highly detailed backstory built up in the Warhammer 40,000 manuals and books, the world that Ultramarines takes place in is a fascinating mixture of hard-edged science-fiction and Mediaeval religion. The menace being fought against seems a mix of comic-book H.P. Lovecraft and mediaeval demonology – where aliens are referred to in terms of being demons. The suits the soldiers wear are modelled along the lines of mediaeval tunics and suits of armour, while the space station is even outfitted with such archaic things as burning braziers, stained glass windows and an altar.

The basic plot set-up in Ultramarines closely parallels Aliens (1986) – a group of tough space marines are given orders to go to a remote world and discover why all communication from a colony has ceased. It is not particularly original but the set-up has potential. Unfortunately, it comes without much pay-off. There is some ominous brooding anticipation in the build-up and a few minor attacks scenes that never amount to much. That is about it before the encounter with the survivors, whereupon the film segues into a debate over whether they are infected by Chaos or not. The film is over within a surprisingly brief 70 minutes.

The climactic twist reversal about one of the party being possessed is more confusing than it is a shock twist – it leaves far too many questions about how said character (who you are unable to tell apart from the others anyway) ended up becoming possessed by the forces of chaos in the first place. In terms of where the film could have gone with this, the eventual let down in regard to the build-up of the scenario is enormous – you feel like it should have mounted to something amazing with the Ultramarines battling the forces of chaos to the death rather than simply a hunt through the space station for one possessed man.