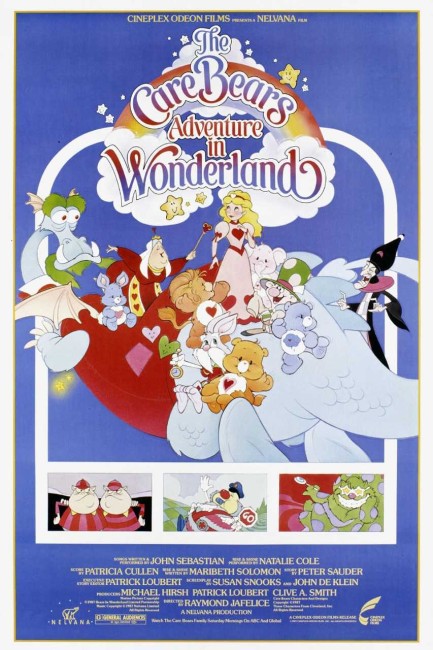 A white rabbit appeals to the Care Bears to ask their help in finding the Princess Alice. The evil Wizard of Wonderland has abducted Princess Alice. Unless they find her, The Queen will have no choice but to crown the Wizard the ruler of Wonderland. The Care Bears find a girl, also called Alice, who looks identical to the princess. With Alice, the Care Bears head into Wonderland, a place of perpetually strange and nonsensical sights. While several of the Care Bears search for the Princess, having to fight off the Wizard’s minions, the others take Alice to The Queen. There however the Wizard demands that Alice undergo The Princess Test and prove that she is a true princess.

While the other two Care Bears films are amiable as children’s movies go, The Care Bears Adventure in Wonderland is the weakest of the three films. Here, Nelvana have had the peculiar idea of combining a standard Care Bears/moppet animation adventure with a retelling of Lewis Carroll’s Alice in Wonderland (1865). The results are peculiar to say the least.

Nelvana have certainly been liberal in their interpretation of Lewis Carroll, resulting in some intriguingly strange modernisations – The Caterpillar is a traffic warden; The Cheshire Cat a rapping soul cat; while the Mad Hatter’s hats cause him to undergo personality changes every time he dons a new one; and Tweedledum and Tweedledee neatly slot into becoming standard dim-witted villain’s sidekicks. There are familiar aspects from the Lewis Carroll books – a Red Queen, a White Rabbit, a croquet game and Alice is put on trial – but all of these aspects perform decidedly different functions to the ones that they do in the books.

Moreover, the film has cleaned Alice in Wonderland up for the moppet audience – there are no cries of “Off with her head” from the Red Queen – indeed, the Red Queen becomes a motherly figure, welcoming Alice as her own daughter – and there are no games of croquet using storks as mallets. There is also nothing of Lewis Carroll’s delight in wilful absurdity and nonsense rhymes.

Largely, The Care Bears Adventure in Wonderland is a case of snippets of Lewis Carroll having been grafted onto the formula of the moppet animation fantasy – Wonderland is now banally threatened by an evil wizard, Alice has to go on a quest and there is a major cop-out ending where we learn that Alice and the real princess have changed places.

There are places though when the film bursts through with a joyous surrealism that captures something of the visual nonsense of Disney’s Alice in Wonderland (1951) – the Care Bears flying about in cars made of cloud; birds that are shaped like houses with wings; creatures that juggle their eyeballs; a landscape that collapses to reveal it is the fantail of a bird; a swam of B’s; parasol birds. The end credits come with a bizarre rap song about eating food.