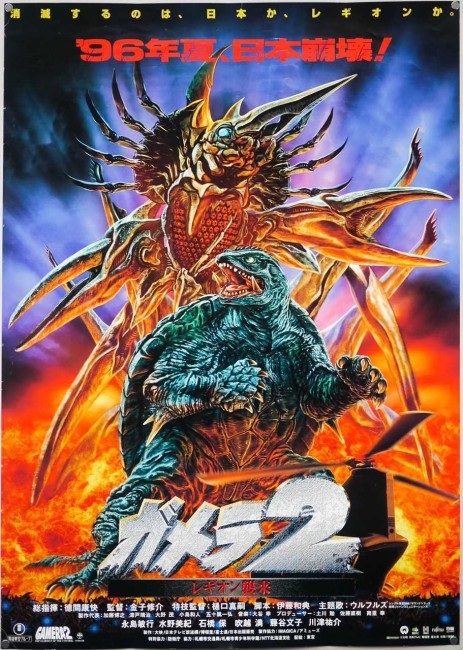 A meteorite lands in the mountainous area north of Sapporo. Soon after, alien bug creatures attack in the Sapporo City subway. A giant pod smashes up through the buildings and starts to change the air. Scientists believe it is an alien creature that is attracted by silicon and electromagnetic radiation. They name it Legion because the insects act as a hive mind. Gamera appears and battles Legion. Legion then hatches into an even more powerful form and rampages across the countryside.

Gamera is a Japanese monster that was originally created as a copy of Toho’s Godzilla by rival company Daiei. Beginning with Gammera the Invincible (1965), Gamera was put through seven cheap films, before Daiei’s financial collapse in the mid-1970s. (See below for listing of the other Gamera films). In the 1990s, director Shusuke Kaneko conducted a revival of the series with the sensational Gamera, The Guardian of the Universe (1995), which immediately set a new benchmark of effects in the Japanese monster movie. Kaneko next made Assault of Legion here and completed the trilogy with Gamera 3: Revenge of Iris (1999), which is one of the 2-3 best Japanese monster movies ever made. (For more detail see Japanese Monster Movies).

I watched Assault of Legion after having seen both The Guardian of the Universe and Revenge of Iris and having been blown away by both. Assault of Legion is the least widely available of the three films. In finally tracking it down, I sat down to watch expecting more of what Shusuke Kaneko had conducted on the other two films – and came away disappointed.

Shusuke Kaneko follows the same approach he does in his other monster films – he takes some time in the build-up before he unveils the monster(s). On the minus side, nothing much happens during these scenes – Legion sends forth some bug creatures that kill people in a subway car and then creates a giant plant that sits atop a building not doing much except apparently changing the air. The human characters seem even more perfunctory and irrelevant to the special effects than they usually do in a Japanese monster movie.

The mass destruction scenes kick in somewhat with the arrival of Gamera, which perks things up. Mindedly, the film reaches the one-hour point with still not a great deal having happened. The film does finally get it together for a standard spectacular mass destruction ending – even so, it feels routine in comparison to the other modern Gamera or Godzilla entries. Gamera also gains the heretofore unmentioned ability to harness the energies of the Earth to make a revival after being downed by Legion.

Certainly, the full form of Legion is one of the more outlandish of all Japanese monsters. It has something akin to a scorpion body and an upright torso with a circular head that is surrounded by spikes that stand out in a halo, a long abdomen that has multiple tails waggling after it, and a long proboscis that opens up into a maw that uses its two jaws to fire energy bolts at people like a giant Van der Graaff accelerator.