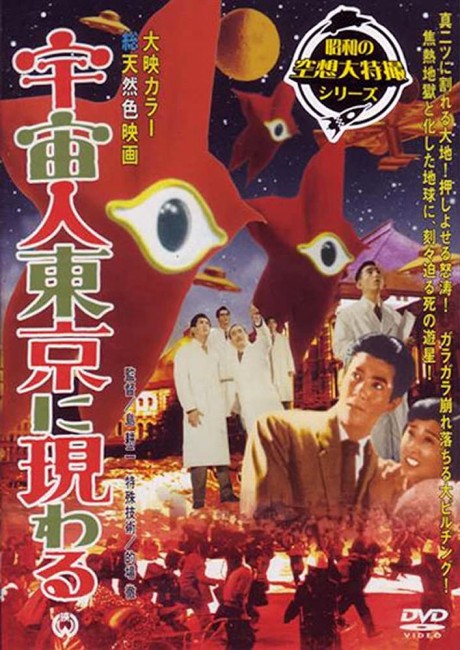 There are sightings of UFOs all over Japan. These are piloted by starfish-shaped Pairan aliens who come from a planet on a counter-Earth orbit on the far side of the sun. The No 2 Pairan takes the form of the popular singer Hiari Aozora and appears on Earth. She is taken before scientists and reveals that the aliens have come to deliver warning of a planet that is on a collision course with the Earth.

Warning from Space was a very early entry in the Japanese science-fiction film. Director Ishiro Honda had stated the genre off a couple of years earlier at Toho with Godzilla (1954) – by the time Warning from Space was made, Honda had already made a sequel Godzilla Raids Again/Gigantis the Fire Monster (1955). The year after this Honda would make The Mysterians (1957) and launched a series of colourful space operas that carried on throughout the 1960s with the likes of Battle in Outer Space (1961) and Gorath (1962). All of Honda’s films were made at Toho, which became the foremost Japanese producer of science-fiction and monster movies throughout this period. Warning from Space came from the rival company Daiei who were better known for their Gamera series beginning with Gammera the Invincible (1965).

Warning from Space was the first Japanese entry in the great cycle of alien invader films that was sweeping Hollywood (even though the mid-film revelation shows that it is not really an alien invasion film). The plot about the alien come to deliver a warning to humanity takes a huge leaf from The Day the Earth Stood Still (1951). The film is also informed by the fascination with UFOs (flying saucers as they were being called back then), which were a new phenomenon everyone was talking about in the day (the term ‘flying saucer’ had only been coined in 1947).

The plot about an oncoming astral body on a collision course with the Earth has been taken from the then recent Hollywood hit of When Worlds Collide (1951), while the attempts to deflect it with missiles is something that prefigures later films like Meteor (1979) and Armageddon (1988). In an interesting side note, this is also the very first use of the highly unscientific notion of the counter-Earth orbit theme – that there is an unknown planet orbiting the sun in exactly the opposite place to the Earth – which has proven surprisingly popular in films such as Doppelganger/Journey to the Far Side of the Sun (1969), The Stranger (1973) and Another Earth (2011).

Alas, Warning from Space is terminally dull. A few UFOs appears but nothing happens for long stretches of time. These scenes are taken up by dully directed scenes of various people talking about what is going on, even going fishing. The films seems to set out to be an alien invasion film but this is reversed in mid-film and we learn that the aliens are benevolent and have merely come to deliver the titular ‘warning from space’. The alien visitors and warning plot is then placed on a backburner and the film essentially becomes a disaster movie.

The principal problem is that Daiei are not operating with the special effects budget that Toho afforded their films, nor the expertise that Ishiro Honda and Eiji Tsuburaya found in dealing with effects. The effects here are cheap and impoverished. The film does have thing going for it – starfish-shaped aliens, which look unique and completely awesome. On the other hand, the mass devastation caused by the oncoming planetary body is limited to no more than a school being flooded and some collapsing buildings.

The film also suffers from the terrible dubbing that plagued almost every Japanese film released to English-speaking countries during this era.