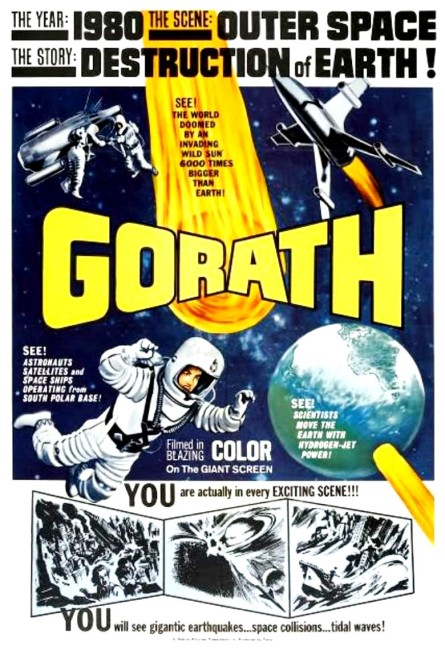 The Japanese spaceship JX-1 is launched under Captain Raizo Sonoda. It is then diverted from its planned course of exploring Saturn to investigate a planet heading towards Earth. The planet, named Gorath, is six thousand times the mass of the Earth. However, the JX-1 is destroyed as it tries to land on the planet. As Gorath nears, scientists come up with the idea of constructing massive atomic engines at the South Pole in order to blast the Earth out of its path. A second spaceship JX-2 is sent up to rendezvous with Gorath. The astronauts observe that Gorath is growing bigger, absorbing the debris it encounters. Scientists fear that the nuclear engines will not be enough to deal with the enlarged Gorath and it will instead make a close pass, catastrophically disrupting Earth’s tidal patterns and causing massive earthquakes.

Japanese director Ishiro Honda (1911-93)’s greatest claim to fame will always be that he was the man who created Godzilla in Godzilla/Godzilla, King of the Monsters (1954). Honda went on to make 51 films, most of them in the kaiju genre (see below for Ishiro Honda’s other films). Honda also created the Japanese space opera with The Mysterians (1957) and Battle in Outer Space (1961). It was not long after this that he began to merge the Japanese monster movie and space opera together wherein alien invaders pitted various monsters against each another as part of an invasion plan as in the likes of Ghidrah the Three-Headed Monster (1964), Monster Zero (1965) and Destroy All Monsters (1968).

I have seen a number of reviews that have lumped Gorath in with the various other giant monster films that Honda and Toho were putting out during this era. The planet Gorath even made a cameo reappearance in the Toho monster rally Godzilla: Final Wars (2004). The sole reason for this is the appearance of a giant walrus that is resurrected out of the ice by the nuclear engines in the latter quarter of the film – shades of The Beast from 20,000 Fathoms (1953). Unlike almost every other monster to appear in a kaiju film, the giant walrus has never appeared anywhere else again.

The upshot of this is that Gorath is incorrectly perceived as a monster movie where it should more accurately be seen either as a space opera/space exploration film or a disaster movie. It has less allegiance to Godzilla and any of its ilk, or for that matter The Mysterians, than it can be considered a Japanese version of When Worlds Collide (1951) – or of works inspired by When Worlds Collide such as Meteor (1979), Armageddon (1998) and Deep Impact (1998). Of particular similarity is the Italian space opera Battle of the Worlds (1961), which came out the year before and featured a similar plot about astronauts trying to land on a roving planet.

Gorath is fairly typical Ishiro Honda fare. That is to say, all the emphasis is on special effects spectacle while the human element plays a distant second behind this. The human dramatics are so stolid that it is, for example, difficult to individually distinguish the crew of the various JX expeditions from each other.

Certainly, the effects are very good. There is some colourful and, for the era, reasonably convincing miniature shots of rocketships travelling through space, passing space stations and nearing the coruscating red-orange mass of Gorath. These effects are certainly a great deal better and more convincingly detailed than the Italian space opera spectacles of the era such as Assignment Outer Space (1960), War of the Planets (1965) and War Between the Planets (1966).

Even better are the scenes of the construction of the polar base where the film offers up some of the best miniature and model work the era had to offer. Naturally, Honda winds the whole film towards a mass destruction climax where the planet’s near path causes a tsunami to flood the streets, overwhelm a speeding train, demolish buildings and the like where Honda and crew are clearly showing off with the budget at their disposal.

The downside of Gorath comes in comparison to the Godzilla films and The Mysterians. They feature humanity (or Japan) dealing with an identifiable and personified menace – rampaging giant monster(s), alien invaders – whereas there is not anything as clearcut here – just a giant planet heading towards Earth. Thus there is not a great deal of drama to the film – the various space launches, most of which consists of the journey there and some tension about the ships landing/being drawn into its orbit, and Honda occasionally remembering to cut back to girlfriend Yumi Shirakawa worrying over pilot Akira Kubo who loses his memory as a result of his close encounter with the planet.

There is some drama with the building of the polar engines where the film tends to resemble more a giant engineering spectacle film akin to Gold (1934), Trans-Atlantic Tunnel (1935) or Crack in the World (1965). You suspect the reason the giant walrus turns up at the end is to give these scenes some drama – the walrus doesn’t feel like it belongs in the film, even if the effects are perfectly competent.