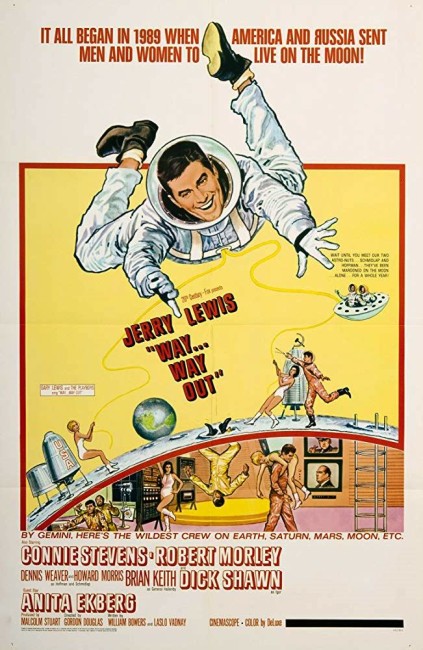 It is near the end of the Twentieth Century. The United States has established a moonbase to monitor weather on Earth but the two men stationed there for the last twelve months have gone stir crazy and are attacking each other. NASA director Harold Qounset’s solution to this is to send up a married couple. However, the couple selected have had a marital spat and now refuse to go. With the launch about to take place on Thursday, Qounset hurriedly turns to the next astronaut candidate Peter Mattemore. With only three women sufficiently qualified to accompany him to choose from, Peter settles on the prettiest looking one Eileen Forbes. However, sparks fail to fly on their date – he is eager but she remains unmoved. They however agree to marry in name only for the sake of the mission. Once on The Moon, they must deal with the two lust-crazed former crewmen and the couple from the nearby Russian moonbase who are undergoing their own relationship difficulties.

Jerry Lewis was possibly the biggest comedy star of the late 1950s/1960s. Lewis found fame in the late 1940s, initially partnered in a stand-up act with Dean Martin, with the two moving on to radio and early tv broadcasts. They first appeared together on film in My Friend Irma (1949) and made sixteen films together over the next decade, including one Old Dark House comedy Scared Stiff (1953). The team parted ways in 1956 – the reasons are not clear but speculation has it that Lewis was considered the funnier of the two and was being favoured in publicity. Beginning with The Delicate Delinquent (1957), Lewis then launched a highly successful solo film career. He went on to make about two films a year for the next decade, including the likes of The Sad Sack (1957), The Geisha Boy (1958), The Bellboy (1960), Cinderfella (1960), Visit to a Small Planet (1960), The Ladies Man (1961) and The Nutty Professor (1963), among others. Lewis also directed twelve of his own films. Alas for Lewis, Way … Way Out was not a box-office success and heralded a period when his popularity started to thin out.

Way … Way Out was one of a spate of Space Mission comedies made during the 1950s/60s. Almost every comic of the era ventured into space at least once – Abbott and Costello in Abbott and Costello Go to Mars (1953), The Three Stooges twice in Have Rocket, Will Travel (1958) and The Three Stooges in Orbit (1962), Norman Wisdom in The Bulldog Breed (1960), Bob Hope and Bing Crosby in The Road to Hong Kong (1962), Frankie Avalon in Sergeant Deadhead (1965) and Don Knotts in The Reluctant Astronaut (1967).

I remain fairly much in the middle regarding Jerry Lewis. He doesn’t grate with me the way that Jim Carrey and Adam Sandler do; equally, his work has not left me much to rave about – The Nutty Professor and The King of Comedy (1982) excepted. All of that said, Way … Way Out is not a particularly great example of Lewis’s comedy. For one, it has a non-too-funny sexism that doesn’t play so well today.

The set-up is less a comedy about the Space Race than one premised on the tried and true plot of a man and a woman forced to marry even though they don’t have feelings for one another – a trope so creaky it goes way back to the 1920s. Even then, the premise sort of peters out once Jerry and Connie Stevens reach The Moon where, rather than having the comedy about them discovering feelings for one another as you would expect the arc of such a story to be, we instead get drawn-out slapstick involving the two previous crewmen followed by the Russians.

Even then, none of the comedy is particularly funny. In many of the earthbound scenes, Jerry Lewis even gets upstaged by Robert Morley over-acting his head off with the ripeness of a three-week old ham. There is the odd scene that amuses like the wedding ceremony that takes place in the elevator ride up to the rocket where the lines the minister is trying to get the couple to say keep getting cut off by Robert Morley urging them to hurry along.

On the other hand, once we reach The Moon, everything gets dragged out into a series of unfunny scenes as though the film had no idea where it was trying to go. The scenes with Howard Morris and a young Dennis Weaver fighting, drawing dirty pictures, lusting over the thought of Connie Stevens bathing and soaping her body play out pretty embarrassingly today. The scenes getting drunk with the Russians, played by Dick Shawn and Anita Ekberg, are not much better and drag out far longer than they should have been allowed to.

Director Gordon Douglas began working for Hal Roach Studios and made a great many Westerns during the 1940s. He made a surprising number of other genre films including Zombies on Broadway (1945); Dick Tracy vs Cueball (1946); the classic giant atomic monster film Them! (1954); the spy film In Like Flint (1967); and the Missing Link film Skullduggery (1970).