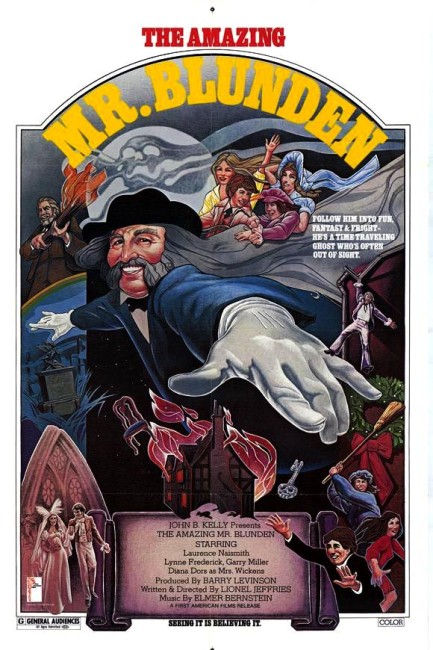 The solicitor Blunden appears to impoverished widow Lucy Allen, offering her a housekeeping position on the rundown Langley Park estate. She happily accepts. Wandering the grounds, her two children Lucy and Jamie meet the ghosts of Sarah and Georgie Latimer, two children from the year 1818 who have travelled forward in time to obtain their help. Agreeing to help, Lucy and Jamie take a potion and travel back in time to 1818 to prevent Sarah and Georgie from meeting a foul end at the hands of their uncle and his cruel mother-in-law who are plotting to kill them in order to obtain their inheritance.

This rarely seen children’s ghost story has a highly acclaimed reputation from the few who have seen it. Although this is something that should, allowing greater exposure, prove slightly over-rated. Not that The Amazing Mr Blunden is a bad film, far the contrary.

The Amazing Mr Blunden should be complemented for taking a complex plot that requires much cross-temporal wangling and for pulling it off largely with success – at least until its last third where the convoluted strands become too much and the story deteriorates into a straightforward melodrama.

Actor Lionel Jeffries does a fine job as director – the scene where the library leads the children to it contains a wonderful atmosphere of innocent wonder. There is a marvellous flashback scene where the children describe the marriage with a childlike innocent eye – how, for example, Arabella the West End dancehall girl becomes a ‘ballerina’ or a visit to the Wickens’ pub is nicely formalised as a ‘going to ask for her hand’. Diana Dors OTT performance does jar with the delicate balance of the film, but both Lynne Frederick and Rosalyn Landor, both of whom would go onto more substantial careers as adult actors, impress.

Most peculiar of all are the end credits where the entire cast appear one by one to say goodbye, thanking the audience for coming and even hoping they will come again.

Lionel Jeffries was better known as an actor, playing old duffer roles throughout the 1960s. He had a huge success in his debut as director with the children’s film The Railway Children (1970). The success of this allowed him to go onto a modest career as a children’s film director with the likes of this, Wombling Free (1977) and The Water Babies (1978). Though the credits state the film is produced by Barry Levinson, this is unrelated to the director of Good Morning Vietnam (1987), Rain Man (1988) and Bugsy (1991).