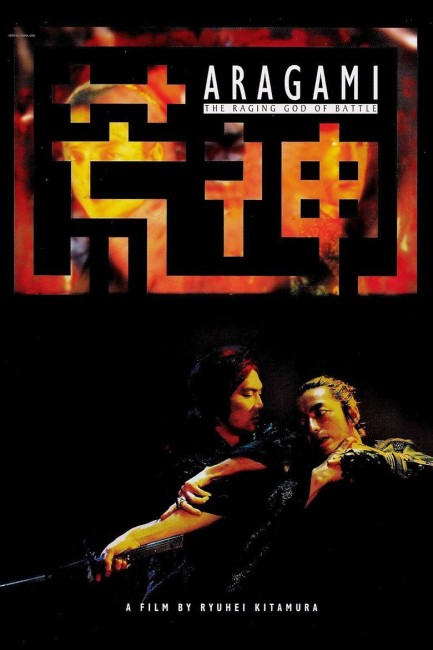 Aragami was the third film from Japanese director Ryuhei Kitamura. Kitamura burst onto screens with the blood-drenched Yakuza/zombie film Versus (2000). He subsequently went onto other genre films such as Alice (2002), an interesting sf film about a psychological experiment conducted in a prison; a segment of the horror anthology Jam Films (2002); Sky High (2003) about a woman who returns from the afterlife as a vengeful ghost; Godzilla: Final Wars (2004); the English-language Clive Barker adaptation The Midnight Meat Train (2008); the animated science-fiction film Baton (2009), the English-language psycho film No One Lives (2012); a live-action adaptation of the manga Lupin III (2014); the English-language horror Downrange (2017) about a roadside sniper; the Mashit episode of the horror anthology Nightmare Cinema (2018); and the non-genre action film The Doorman (2020), as well as produced Battlefield Baseball (2003) and Hellgate (2011)..

Ryuhei Kitamura is not quite as out there as countrymen such as Takashi Miike or Shion Sono but likes to make his films in eccentric ways. Versus, for instance, used only a single exterior setting – a forest – and no constructed sets. Aragami goes one step beyond this – it is an action film that is shot in a single room, the set for the interior of a temple. Indeed, Aragami might hold some kind of record for the only action film to ever be shot using a single set. There are other similarities to Versus – both films feature immortal warriors engaged in an enigmatic battle across the ages.

Aragami starts out seeming like a giant shaggy dog story. Samurai Takao Osawa staggers into the temple with his companion, comes around and is invited to dine and enjoy a few drinks by his enigmatic host (Masaya Kato). The initial conviviality of the conversation starts to take some alarming turns as Masdaya Kato warns Osawa if he goes out he may be attacked by the Aragami and then leans in to tell him “I am that Aragami.” The conversation immediately slips back into laughter as though Osawa is not sure if he should start taking this piece of information seriously. Kato continues, casually asking the samurai how many he has killed, before answering “I have killed 764.” And then the conversation gets onto the subject of the samurai’s recovery where Kato tells Osawa that he in fact raised him from the dead – and that in order to do so he had to feed him the flesh of his companion, indeed that it was his companion’s flesh that he just ate.

There is something akin to the fascinating psychological film The Caller (1988) to these scenes – a film contained to a single location that keeps snaking around with twists and turns and constant carpet from under the feet revelations that leave you not sure if you should believe what is going on. The performances from the two lead characters are perfectly pitched.

The second half of the film branches out into an action film. Here Ryuhei Kitamura creates something oddly atemporal – the presence of a samurai suggests shogunate Japan, yet there are modern handguns among the Aragami’s weapons. The fights are expertly filmed. Kitamura employs Hong Kong-styled wirework – at one point he offers up the novelty of a swordfight that is filmed entirely in darkness lit up only by the flashing sparks from the combatant’s clashing swords. The slight disappointment is that during the second half, the initial highly captivating psychological game between two characters gives way to merely a series of swordfights.