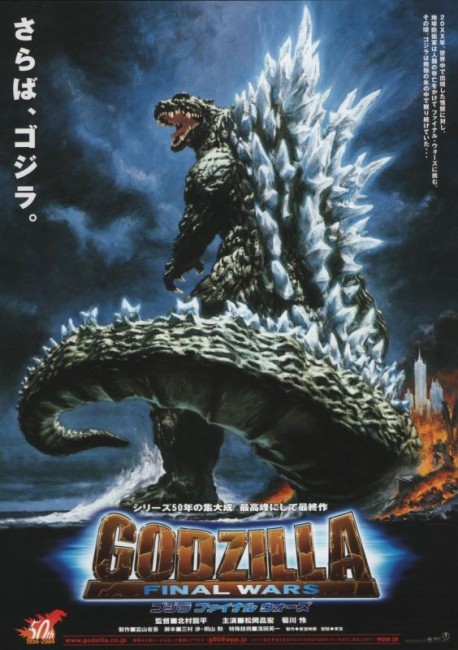 Giant monsters are on the attack all over the world. The Earth Defense Force has created M Organization, an elite corps of mutants with superior fighting abilities, and they do what they can to stop the monsters. A UFO then appears and causes all the monsters to disappear. UN Secretary General Daigo has been snatched by the aliens and is now returned. He announces that the alien Xilians are peaceful and want to unite all of Earth in a Space Nations (as opposed to United Nations) to help fend off the planet Gorath, which is on a collision course with Earth. However, M Organization soldier Ozaki, biologist Miyuki Otonashi and her sister Anna, a tv presenter, work out that the Xilians have replaced Daigo and others with duplicates and that the oncoming planet is a hologram illusion. They realize that the Xilians only regard humanity as cattle. Their ruse discovered, the Xilians unleash the giant monsters to decimate the Earth. Humanity’s only hope is for Ozaki and the others to free the individualistic Captain Gordon from jail. Gordon takes the flying submarine Gotengo and sets out to the North Pole to free Godzilla, the most dangerous destructive force on Earth, to take on the other monsters.

Godzilla: Final Wars was the 28th Japanese Godzilla film. It was made as commemoration of the 50th anniversary of the original Godzilla, King of the Monsters (1954) and is supposed to be the final Godzilla film. Somehow one suspects that the title is as final as it was when the Friday the 13th series announced both Friday the 13th: The Final Chapter (1984) and Jason Goes to Hell: The Final Friday (1993) and in both cases went on to make several more entries in the series. Indeed, Godzilla’s official death was already supposedly announced once before in Godzilla vs Destoroyah (1995) and then subsequently ignored.

Toho introduce a new director to the series in Ryuhei Kitamura. Kitamura had debuted with Versus (2000), an ultra-violent film that attempted an interesting melange of the Yakuza and zombie genres, had no plot whatsoever but featured some cool fight scenes and a supremely high level of on-screen gore. Kitamura has subsequently stayed in the fantastic genre with the likes of the sf film Alice (2002), the immortal samurai film Aragami (2003), the ghost story Sky High (2003), the excellent English-language Clive Barker adaptation The Midnight Meat Train (2008), the anime Baton (2009), the English-language horror film No One Lives (2012), a live-action adaptation of the manga Lupin III (2014), the English-language horror Downrange (2017) and the Mashit episode of the horror anthology Nightmare Cinema (2018), as well as produced Battlefield Baseball (2003) and Hellgate (2011).

Many of the other Godzilla films of the 1990s have remade or reworked the old Godzilla films or else resurrected their monsters with an animatronic and CGI makeover. If the Godzilla films of the 1990s can be considered remakes of earlier films, then Godzilla: Final Wars is surely a remake of Destroy All Monsters (1968), which was made to commemorate Toho’s 20th monster movie and brought together just about every monster in their films up to that point. Godzilla: Final Wars similarly brings together just about every monster that has appeared in the Godzilla series over the last 50 years. There are all the regular suspects – Mothra, Rodan, Baragon, Gaigan and Ghidrah/Ghidorah, who both get new armoured makeovers, as well as lesser known monsters such as Angilas from Gigantis the Fire Monster (1955), Ebirah the giant crab from Godzilla vs the Sea Monster (1966), Gimantis the praying mantis and Kumonga the giant spider from Son of Godzilla (1968), Hedorah from Godzilla vs the Smog Monster (1971), the sea serpent Manda from the non-Godzilla Atragon (1963) who was subsequently incorporated into Destroy All Monsters, and the most ridiculous looking of all Japanese monsters, the giant puppy dog King Sesar from Godzilla vs the Cosmic Monster (1974), as well as the bald, sunglasses clad aliens from Planet X who first attempted to use giant monsters to invade Earth in Monster Zero/Invasion of the Astro Monster (1965). Godzilla’s son Minya also turns up and there is even an appearance from the Godzilla of the much maligned American remake Godzilla (1998), who promptly gets trashed (Toho seem to enjoy making snide putdowns of the American version).

Not content with ending the homages there, Godzilla: Final Wars also features references to a host of other Toho movies – the inclusion of Varan from Varan the Unbelievable (1958), a flying super submarine that has been modelled on the one in Atragon, as well as mention made of the planet Gorath, which appeared in Gorath (1962), a Japanese monster movie about a planet on a collision course with Earth. The homages even extend to bringing back actor Akira Takarada, who had a role in the original Godzilla.

Godzilla: Final Wars is one of the best Godzilla films we have had in some time. The battles manage to be particularly exhilarating, with the Toho effects team on top form. There is a huge degree of fun to be had particularly during the culminating scenes with Godzilla, Gaigan, Ghidorah and Mothra battling it out and ripping one another’s body parts off amid much mass devastation. I don’t think I’ve seen a Japanese monster movie before that leaves Tokyo so completely devastated as Final Wars manages to.

The Godzilla films of the 1990s and 00s always trod an uncertain line as to whether they wanted to cast Godzilla as the defender of Japan or return to the original conception of it as a rampaging aggressor. Godzilla: Final Wars intriguingly attempts to straddle both interpretations, before coming to a touching final scene of sorts where Minya stands up and persuades Godzilla to stop his path of rampage and the two are seen walking off into the sunset in the ocean. In this version, Godzilla is said to be angry as a result of originally being disturbed by atomic bombs and the end is one that figuratively says it is time to put such hurts to rest.

My main complaint with Godzilla: Final Wars might be that Ryuhei Kitamura allows his predilections to get away with themselves. Kitamura clearly has frustrated ambitions to be an action movie director. This was the case with Versus where he spent a good deal of time copying the poses of the John Woo-styled Hong Kong action movie. It is the same here. For a substantial part of the film, there are nearly more action sequences than there are monster movie scenes. Here Kitamura substantially borrows moves from Woo and The Matrix (1999) with characters punching and shooting it out in slow-motion, racing on motorcycles while the camera twirls around them – there is even a slow-motion Bullet Time sequence at one point. Kitamura loves to pose – just about every character in the film comes wearing black leather or PVC and shades and has their hair trendily styled. However, this gives Godzilla: Final Wars a problem in that it starts out with a great many monster attack scenes and then suddenly shifts gear and becomes an action movie, where for the middle third of the running time it has nothing to do with giant monsters. It feels somewhat of a misstep, especially for an audience that has come to a film like this expecting mass destruction and instead find Ryuhei Kitamura getting carried away with his action movie predilections.

The film does pick itself up for an exhilarating climax that is all that one expects of a kaiju eiga. Moreover, the action scenes are considerably boosted by a highly entertaining performance from Don Frye, an American professional wrestler based in Japan, who steals a substantial part of the film whenever he is on screen as a hard-as-nails military commander. Although it is hard to guess at times if the filmmakers created the character of Gordon as a parody of a certain caricature or if they believe that that is how Americans actually behave. Certainly, Godzilla: Final Wars should be commended for being one of the few Godzilla films to take place in various international locations and show non-Japanese cities being trashed. It also has dialogue that vies between Japanese and English, although there are times when the film would have benefited from having a native English speaker on the set as some of the lines do not sound like anything an English speaker would say. The dubbing has one or two misspellings and howlers – at one point, the Xilians announce that they have “captivated” their prisoners. There is also a completely bizarre sequence set in New York between a cop, a wino and a pimp that looks like he has stepped out of a Blaxploitation film – as to whether the Japanese thought this was an accurate portrayal of New York City or whether it was construed as a parody is anybody’s guess.