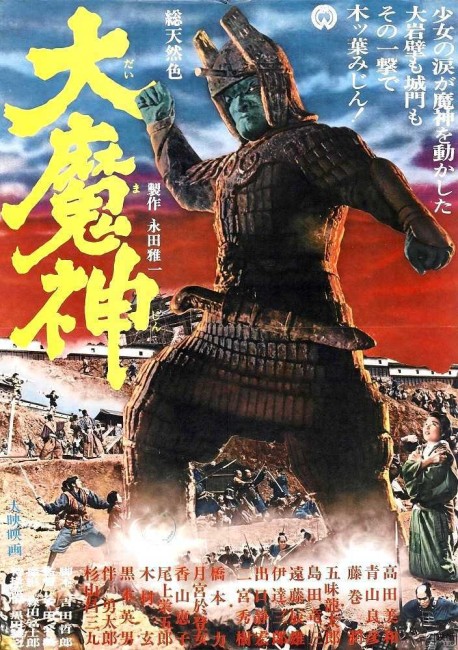 Odate Samanosuke conducts a rebellion and overthrows the rule of Tadakiyo Hanabusa to claim Yamanaka Castle. Kogenta, who is loyal to Lord Hanabusa, helps smuggle Hanubasas’s young daughter Kosaza and son Tadafumi out of the castle. They are granted refuge by Shinobu, the priestess of the majin, the god of the mountain that overlooks the region. The locals are too fearful to go on the mountain and so she takes the children to live in a cave there. Over the next ten years, Samanosuke maintains a cruel grip on the region and enslaves its people. However, when Samanosuke captures Kogenta and then send his troops up the mountain to tear down the stone statue of the majin, it comes to life to exact vengeance.

Majin, Monster of Terror was a trilogy of monster movies made by Daiei. It was followed by two sequels The Return of Giant Majin (1966) and Majin Strikes Again (1966), all of which were shot together at the same time.

The Majin films are often listed as Japanese Monster Movie but in watching it readily becomes apparent that what we have is something very different to Daiei’s own Gamera series or the Godzilla films over at Toho. (As a monster, the majin has often been compared to the Golem – for which see The Golem (1920) – drawn from Jewish legend). For the bulk of its runtime, rather than any monster movie, Majin, Monster of Terror plays out as though it is a regular samurai film, of which there were dozens being made during this era. Indeed, director Kimiyoshi Yasuda spent most of the rest of his career making entries in the popular Zatoichi series about a blind samurai.

There are all the regular tropes of the samurai genre – the edo setting, the upstart tyrant who deposes the rightful benevolent ruler and subjects the peasants of the region to autocratic rule, the mutterings of rebellion and a trope that is more familiar to fantasy films of the children who escape the slaughter of their family and live in hiding. Kimiyoshi Yasuda is a fairly pedestrian director. He directs colourful drama but in a stolid way. There is no kinesis or excitement to any of the swordfight scenes, for instance.

Towards the end, Majin eventually comes to life for a fairly standard series of the mass destruction scenes you expect of a Japanese monster movie. These would be nothing much compared to the average Godzilla film of the era but are at least mounted with a certain epical flair by Kimiyoshi Yasuda. The story is not too much more than a standard one of hubris – where the evil landowner defies the deity of the region (the subtitles keep referring to Majin as a god) and then goes one step too far and incurs the wrath of the beast after awakening it.