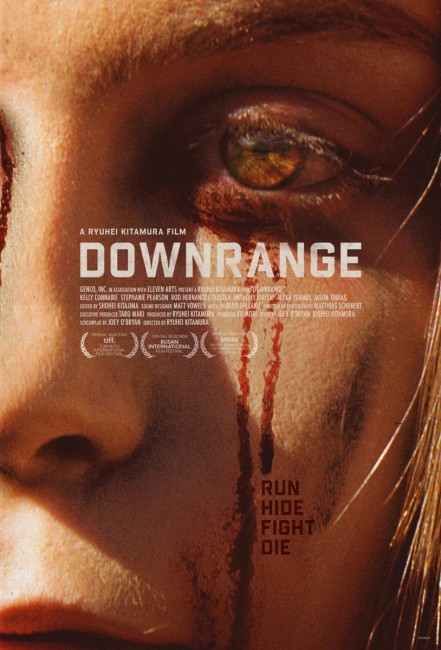 A group of six young people are driving back home along a California backroad when one of the tires blows out on their vehicle. As they go to change it, they discover it was shot out by a bullet. As they realise this, a hidden sniper opens fire and kills two of the group. The others seek shelter behind the car and a nearby log of wood. As the sniper sits in a tree, firing at will, the group try to improvise various means to escape and get help.

Japanese director Ryuhei Kitamura emerged in the early 2000s with the gore-drenched Yakuza zombie film Versus (2000). He subsequently went onto a number of other genre works in Japan including the horror film Alive (2002), Aragami (2003) about an immortal samurai, the horror film Sky High (2003), Godzilla: Final Wars (2004), the animated science-fiction film Baton (2009) and a live-action adaptation of the manga Lupin III (2014). Kitamura first ventured into English-language genre cinema with the adaptation of Clive Barker’s The Midnight Meat Train (2008), his best film to date, followed by the horror film No One Lives (2012), Downrange and subsequently the Mashit episode of the horror anthology Nightmare Cinema (2018) and the non-genre action film The Doorman (2020). He has also produced Battlefield Baseball (2003) and Hellgate (2011).

Unless you knew otherwise, you could easily assume that Downrange is an American-made film. In actuality, it is a Japanese film that was shot in Lebec, California using an American cast. The script is from American Joey O’Bryan who has also supplied scripts for the Hong Kong action films Fulltime Killer (2001) and Motorway (2012), Kitamura’s Lupin III and the US/Thai action film Triple Threat (2019).

The set-up of the shooter picking off passers-by on a roadside is very similar to the Spanish film King of the Hill (2007) – although that had a very different explanation for who the killer was. Ryuhei Kitamura creates a tightly contained film – the only location throughout is the same hundred yard stretch of roadside highway, while the action is focused around six young people whose numbers are progressively whittled away as they huddle behind the car or other scanty pieces of shelter. There are a handful of others that turn up later in the show but the essence of Downrange has been stripped to a bare minimum – the shooter in a tree and the teens huddled nearby and with nothing complicating this. The teens are so generic that only a couple of them get any more than a first name and only Todd gets a backstory.

Within the first few minutes, Ryuhei Kitamura immediately establishes that we are in for no ordinary teen horror film. He set up Alexa Yeames as the seeming point-of-view character and the handsome Jason Tobias opposite her between whom there seems the suggestion of attraction. There is much banter as the group set about changing the tire. A shock comes when Alexa Yeames goes around the side of the car to find Jason Tobias’s body lying on the road still twitching from a bullet. The kicker that comes is when she is hit too and then stands there in front of the others, taking short steps as the camera pulls back to reveal she has been shot through one eye. It is this creating of what we assume to be point-of-view characters and then messing with our expectations that immediately signals that Downrange is a horror film that is going to pull the carpet out from under us in terms of any easy assumptions.

The result becomes a tough, brutal survival thriller. It is one where all of the suspense is centred around essentially a few square feet as the survivors huddle behind the car. The drama comes in small matters like trying to reach around the side of the car to get a cellphone signal, to get a bottle of water from the backseat, to get the keys from the ignition and slip the car into neutral to move it away– only for the car to start rolling in the wrong direction because it is on an incline. Ryuhei Kitamura rides the tension out with considerable assurance. The film loses the effectiveness of its tight, containment when it expands out beyond this and introduces others but for the most part is a tense and suspenseful ride.